Rory McIlroy found plenty of comfort in the testing wet and windy conditions to move into contention heading to the weekend rounds of the PGA Tour’s Sentry Tournament of Champions in Hawaii.

Contesting the event for a first time in his 12-year pro career, McIlroy  dealt with the test presented him superbly in posting a second round five-under par 68 to move into a three way share of second place at nine-under par alongside Bryson DeChambeau (68) and Kevin Tway (71) on the Plantation course at Kapalua.
It sees McIlroy and the two Americans trailing two shots behind another American in Gary Woodland who posted a second straight 67 to lead the ‘winners only’ field on 11-under par.
“The wind was up a little bit compared to Thursday but the nice thing about this golf course is that it is designed with this wind in mind,” said McIlroy.

“The wind usually comes out of the same direction every day, so it’s not too difficult and you know what to expect before you go out there.  You know what clubs you are going to hit off all the tees and how far right or left you are going to have to aim on each hole.
“I stayed patient out there and it was good also to play a couple of practice rounds in conditions like what we had today.
“It does get tricky especially when you get onto the greens, and then even moreso on some of the exposed greens on the back nine but overall the scores are still pretty good and, I mean, you have guys double-digit under par so it’s still pretty scoreable out there.”
The four-time Major winning McIlroy bogeyed his fourth hole but was then six-under par for his closing 14 holes and highlighting his round with four birdies over the last six holes.
And of much pleasure to McIlroy is that he’s seven-under over the inward half for the two rounds while he’s dropped just two shots also in 36-holes.
“The thing is if I can get through that front nine in under par there is good chances on the back nine and that is what I did out there today,” McIlroy added.
“So, I was able to take advantage of those chances over the back nine again today.
“The good thing also is I have only had two bogeys in 36-holes and that’s nice way to start the new year.”

It may come as somewhat of a surprise McIlroy has found form so quickly in the Hawaiian event he had previously qualified on six occasions but elected instead to compete in the Middle East swing on the European Tour.
“I’m comfortable on this golf course and I’ve enjoyed the last couple of days like flighting different shots, hitting different trajectories and with all the technical work I have had to do in the off-season, it is a real contrast to come out here and completely forget about the swing and just hit the shots,” he said.
“It’s more of a feel move for me to be out here competing in Hawaii.”
McIlroy will tee it up with Kevin Tway in the second last group at 8:35pm tonight Irish time. 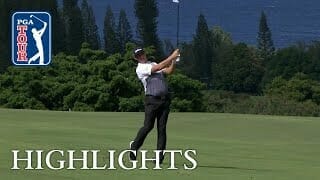