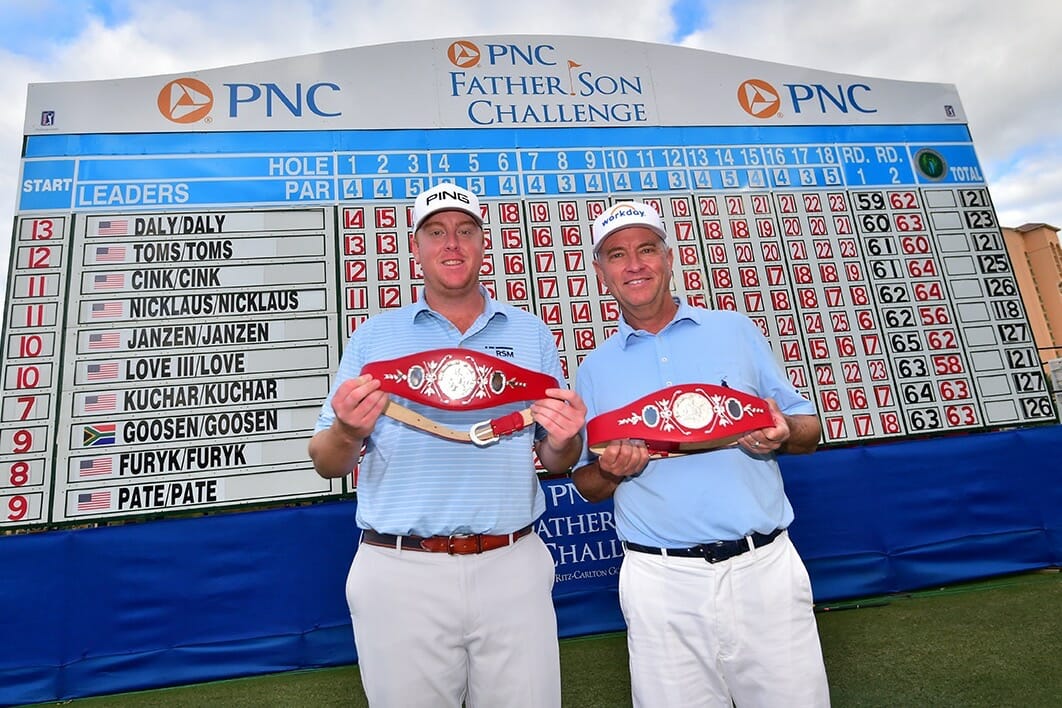 Tyrone Clarke, the eldest son of Darren Clarke, celebrated birdieing the closing hole on the final day of the 2018 PNC Father-and-Son Challenge in Orlando and the 20-year old combined with his 2011 Open Championship winning father to produced a 36-hole ‘better-ball’ scores of 67 and 64 for a 13-under bogey-free tally on the Ritz Carlton Grande Lakes course close to Disney World in Orlando.

The Love’s produced a sizzling last day 16-under par 56 that included two eagles and 12 birdies to be out in 27 and home in 29 to win by three shots with a new tournament record of 26-under par in total and there were only four holes the Love’s parred in a remarkable scoring spree.

“That feels great. We’ve come close several times, he’s been very competitive this week, after a slow start yesterday it’s nice to get it going and get another win,” said Love III after he and his son won the commemorative Willie Park Snr and Willie Park Jnr Open Championship belts.

Reiterating his Father’s words, Dru, who recently finished 54th in the PGA Tour’s RSM Classic at his home course said, “We love this tournament so much, it means the world to us, especially with our whole family here.”

In a bittersweet moment regarding the tournament’s qualifying criteria that states all partners of the invited professional must not hold any professional Tour status, Dru explained, “My dad said let’s finish this one off because hopefully it’s our last one, I’m hoping my sister can start practicing so I can come back and caddie for her.”

Gate-crashing the winner’s press conference to congratulate the partnership, was 18-time major champion, Jack Nicklaus, who recorded his highest finish of sixth since 2013 declaring:  “Get yourself on the PGA Tour, I don’t want to see you again at this event.”

Clarke and his son managed four birdies on each half and over the two rounds produced 13 birdies in a bogey-free display and a highlight for towering Tyrone was ending the event in holing the birdie putt at the last with his brother, Conor acting as caddy and his step-mother, Allison looking on.

“It felt very good to birdie the last after the good day we had today,” said Tyrone smiling.

His father added: “Tyrone and I were close to the pin a lot today, an awful lot of chances that just didn’t go in.”

“The thing is though over the two days we didn’t hole enough putts and we are going to have to read them a lot better than today if we are back here next year.”

“Looking back it’s been a great week playing alongside Tyrone and with Conor caddying for him these past two days so to have my two boys by my side has been brilliant.  We had a great time.”

When asked if Clarke would like to see youngest son, Conor compete next year, he said:  “Conor is more into his rugby than his golf, so he will have to practice a bit more.  Maybe he will.”

The Clarke’s were heading to the Bahamas where they’ll spend the Christmas break before Darren makes his 2018 Champions Tour debut on February 9th at the Oasis Boca Raton Championship in Boca Raton and where he son, Tyrone is attending Lynn University.