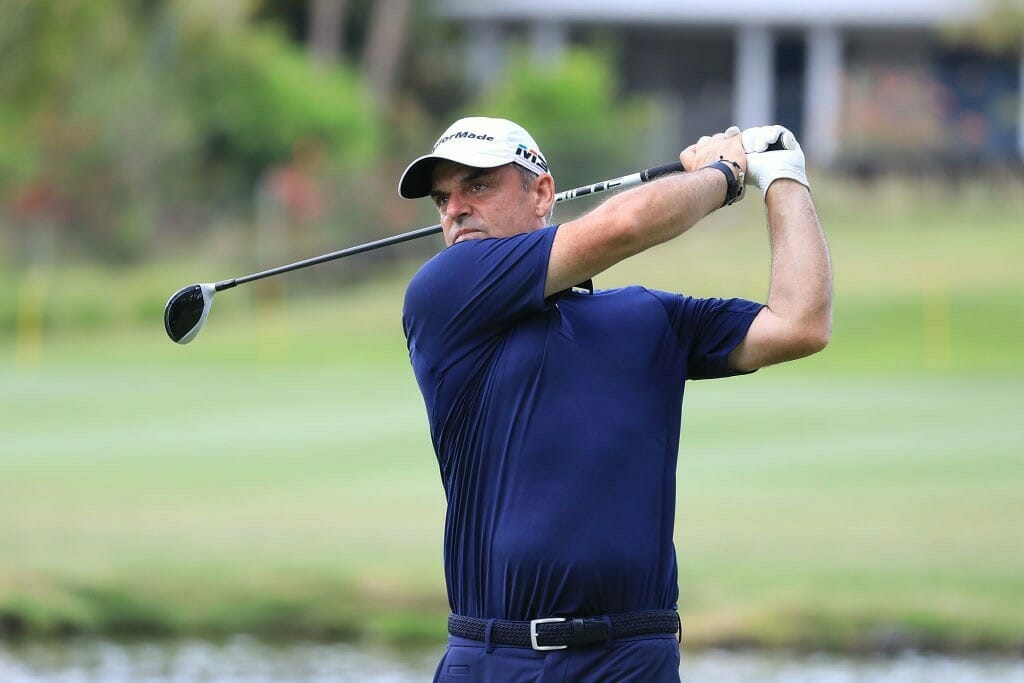 The Dubliner, going in search of a maiden senior title, was in fabulous form all week and signed off with a three-under-par 69 for a 12-under-par total and a share of fourth spot.

In another week such scoring may have proved so different but McGinley came up against a brick wall in Dennis, the American skating clear on 23-under-par.

Of Ireland’s two other challengers, Mark McNulty signed for a one-under-par 71 that saw him end his tournament in a share of 17thon minus-four while Headfort’s Brendan McGovern returned a disappointing four-over-par 76 that resigned him to 49thspot, just two strokes off the foot of the board.

At the top, it was all about Dennis though who secured his fourth Staysure Tour title in stunning fashion as he equalled the Tour’s lowest 54-hole score to win in Mauritius.

The American, victorious at the Senior Italian Open presented by Villaverde Resort earlier this year, carded an eight under par final round of 64 to sign for a 23 under par total, matching the record-setting score achieved by defending champion Thaworn Wiratchant at last year’s event.

Even more impressively, last year’s Staysure Tour Number One didn’t drop a shot across the three days at Constance Belle Mare Plage, carding 21 birdies and an eagle over 54 holes.

He started the final round three strokes ahead of Sweden’s Magnus P Atlevi and the pair traded blows on the front nine as they both made the turn four under par.

Atlevi reduced the deficit to just one stroke after six holes, but Dennis crucially birdied the seventh and eighth holes to restore his advantage.
There were just two strokes in it as Atlevi birdied the 13thhole. However, the American switched gear on the closing stretch and birdied four of the last five holes to sign for a 23 under par total, finishing eight strokes ahead of Atlevi.

“To have my fourth victory on this Tour is amazing,” said Dennis. “I was not expecting much coming into this week. My game didn’t feel good and the jetlag was getting to me, but everything fell together.

“I started striking it well, made some putts and here I am. I wish I knew what I did this week so I could bottle it and keep doing it.
“Magnus played fantastically today. I couldn’t get away from him. I knew he was going to make a lot of birdies today, so my mindset was to keep making birdies and that helped me – knowing that he was going to play so well.

“My son, Phillip, did a great job on the bag this week. He was quiet. He knew what to say and when to say it – we just had a lot of fun out there.”

There was all to play for on the final day across the golf course as the top 29 on the Staysure Tour Order of Merit and three invitations will compete in next week’s MCB Tour Championship – Seychelles.

Double Senior Major Champion Roger Chapman needed a top three finish to guarantee his spot in the season-ending event at Constance Lemuria in the Seychelles, and he carded a final round of 67, five under par, to claim third place outright on 13-under-par.