Opening round 59 for McDowell and Grillo at QBE Shootout

Graeme McDowell singled out team-mate Emiliano Grillo for praise after the duo gelled superbly to post a sizzling 13-under par 59 for a share of the lead on day one of the QBE Shootout near Naples in Florida.

The Ulsterman and Argentinean eagled the first and then produced a dozen birdies with just the one bogey in a ‘scramble’ format where you play from the best drive to end the round tied at the top with the American pair of Patton Kizzire and lefty Brian Harman.

It was then three teams sharing the lead with Bryson DeChambeau and Kevin Na joining the McDowell/Grillo and Kizzire/Harman pairings.

Grillo got he and McDowell off to a great start in eagling the first hole and with birdies at two and four they were quickly four-under through four holes.

The duo dropped their only shot at the fifth ahead of five straight birdies from the sixth to 10th holes.
Birdies followed at 13 and 14 before also birding the closing four.

McDowell, and a veteran of four European Ryder Cup teams and also a winning vice-captain just a few months ago in Versailles, was then asked the key to his and Grillo’s opening day effort.

“The key to playing well in events like this is, you know, just having a great partner really,” he said.
“I always say, What’s the key to a great Ryder Cup record? Having great partners. So, Emiliano and I nearly played together last year. We played a little bit together and hung out.

“He’s obviously playing great towards the end of the season and he played really, really well today. I was very average, to be honest. I came in when I was needed a few times, but I’ve got a little bit of improving to do to keep up with my man here this weekend.”

McDowell had combined a year ago with Shane Lowry in the Greg Norman hosted event and finishing T3rd and two shots out of the play-off.
It was McDowell’s equal-best start in his now seven appearances since making his debut in 2008 while the Ulsterman has also earned a cool $US 830,000 in those seven Tampa showings.
McDowell had combined with American Gary Woodland to shoot an opening day of core of 59 in both the 2014 and 2015 event to eventually finish T5th and sixth respectively.

In contrast, Grillo is making his debut.
The $3.4m event is again being staged of the Norman-designed Tiburon course featuring 11 two-man teams along with the pair of US Ryder Cup star Tony Finau and LPGA starlet, Lexi Thompson. 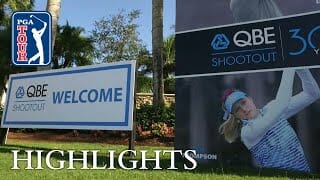