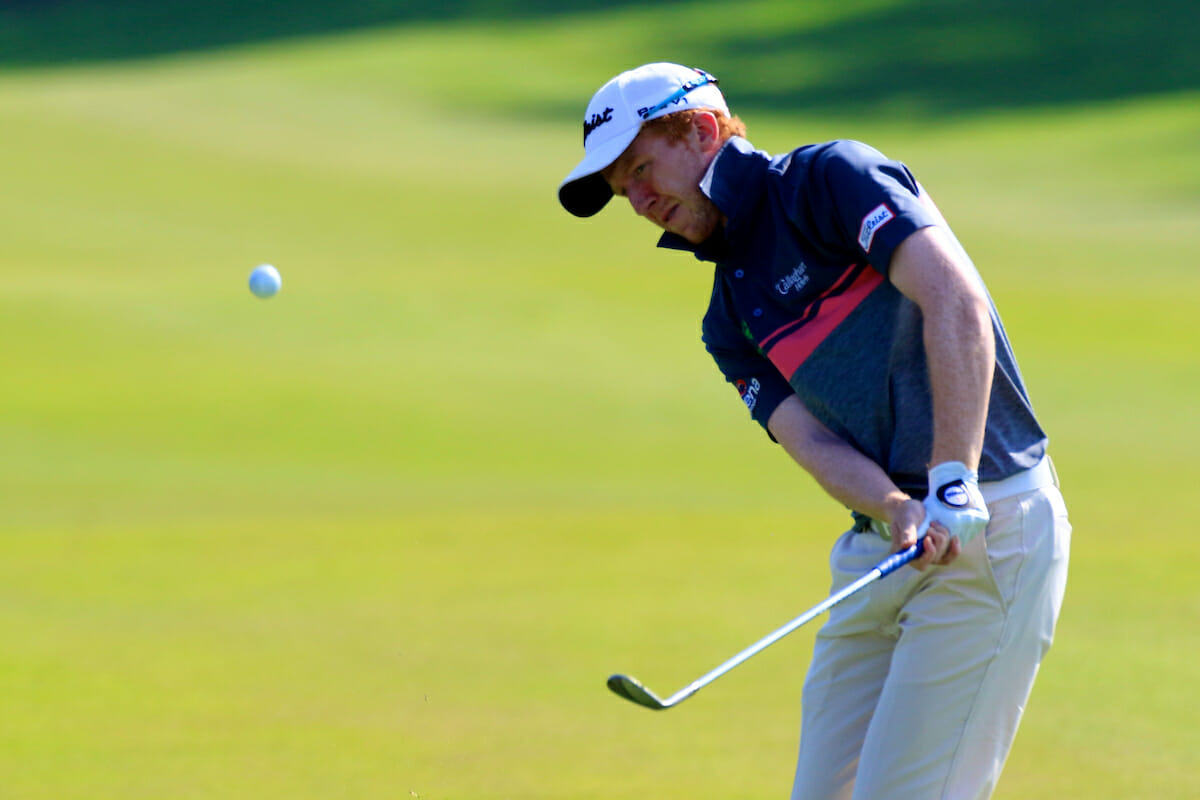 The Dubliner felt his back go in practice yesterday and looked almost certain to miss out on taking the exam at all but he’ll be glad he pushed through to take part after a three-under-par 68 to start on the Lakes Course.
To put the scale of this assignment in perspective, however, his minus three total is only good enough for a share of 56th spot after a hot scoring day at Lumine Golf Club.

Meanwhile Cormac Sharvin was going about his business nicely at two-under-par before a bogey at his 16th hole derailed his round.
Now at even par, which is only good enough for a share of 115th, the Ardglass man will hope that he’s got his bad round out of the way early at the most unforgiving week in golf.
As for rookie Robin Dawson, the Tramore man’s day was littered with errors and while he managed to grind out a one-over-par 72, also on the Lakes Course, Dawson will be another looking for a quick bounce back tomorrow.
The reason why a fast start is imperative is seen in the scoring as Daniel Gavins and Max Schmitt both birdied half of their holes in carding bogey-free rounds of 62 to take a share of the lead into Day Two.

The six-round marathon test of nerves is being contested on two courses, the Lakes Course and the Hills Course at Lumine Golf Club in Tarragona, Spain, but it was the Lakes Course that yielded the two nine under par rounds on a calm Day One that was ideal for scoring.
“I played here two years ago at Second Stage, so I do know the Lakes Course quite well,” said Schmitt. “I started quite well today, I made par by getting up and down on the first, which was a very important one. I hit a lot of good shots, a lot of good putts and some really long putts went in today.
“I hit a lot of good shots into the green, hit it very close to the hole, so I really had to drop them.”
Despite his tender years, the 20-year-old has plenty of experience in professional golf after spending the past season on the European Challenge Tour, which he will rely on with a whopping 90 holes of golf in front of him.
“It’s still a lot of golf to play,” the German said. “I’m just trying to play solid over the last five days and that’s it.
“I’ll be doing less practice after the rounds than I normally would — so just gaining energy and that’s it.

“We’ve still got a lot of golf to play and you have to be at the top of your game to play well here so I’ll just rest today and all the other days.”
For Gavins, who played on the Challenge Tour in 2014 and the European Tour in 2016, there will be no such alterations to the routine that allowed him to equal the day’s best score.
“My routine doesn’t change, it’s exactly the same for me,” the Englishman said. “Today I started pretty well with a birdie on the second hole and kind of put a few wedges pretty close early on. I drove the ball really nicely actually and the putter was really nice— I holed a lot of putts.”
The 27-year-old was calm after his opening round, admitting, like Schmitt, that he does not place much emphasis on a lead with so much golf left to play.

“I had a quick look at the leaderboard but it’s not important at the minute,” he said. “There’s still a long way to go.”
Three players, Spaniard David Borda, Deyen Lawson of Australia, and Germany’s Bernd Ritthammer each fired seven under par 65s to record Day One’s low round on the Hills Course. The entire field will now switch tracks for Day Two as each of the 156 players battle to survive the 72 hole cut, which will see the top 70 and ties continue on to the final two rounds on the Lakes Course.