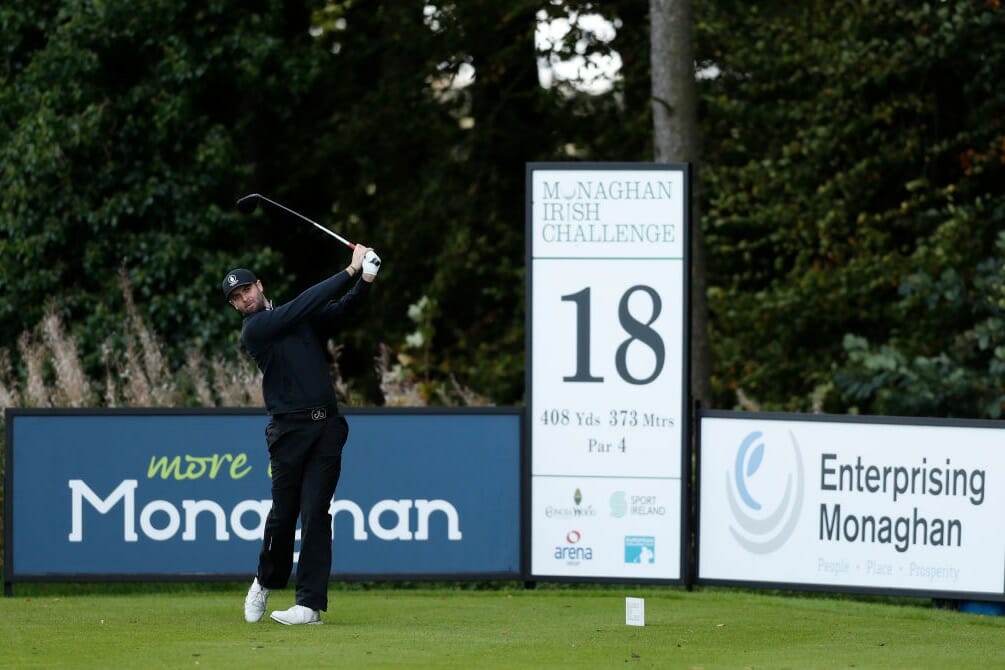 A second successive round of 70 moved Paul McBride inside the top 10 as the Sport Ireland supported Monaghan Irish Challenge reached the halfway stage at Concra Wood, giving the home support plenty to shout about for the upcoming weekend.

Dubliner McBride put himself within three shots of the leaders going into the weekend. Ricardo Santos from Portugal, Sweden’s Niklas Lemke and Scotland’s Calum Hill share the lead on seven under.

McBride is not the only Irish player in contention. Ruaidhri McGee matched the low round of the day with a bogey-free 67 to post three under for the tournament while Conor O’Rourke (-2) and Gavin Moynihan (-1) are also within striking distance.

The cut fell at plus two, which meant that Neil O’Briain (+1), Niall Kearney (+2) and Kevin Phelan (+2) progressed, bringing to seven the total number of Irish players making it through.

While the gusts were not as strong on day two, the course continued to pose problems, providing another thorough examination of the field.

“The wind is swirling and there are cross winds,” said McBride, describing conditions. “You’re not sure if the wind is in or if it’s helping.”

McBride has had to deal with a lot of doubt this season, his first as a professional, and the relief was palpable after a run of six missed cuts.

“I really haven’t played terrible and I’ve been missing cuts by one or two shots,” said McBride. “That’s what it’s like out here.”

A session with coach Neil Manchip at the start of the week revealed an issue with his swing and the benefits of that discovery have been obvious.

“There was something coming into my swing that he [Manchip] didn’t really like,” said McBride. “I got my strike back, which is so important. My consistency of strike had been all over the place.”

As on the opening day, McBride made four birdies, the most important of them coming at the eighth, where he pitched in.

“When I hit it [approach] I thought that’s a bad miss left of the green on a downslope in gnarly rough,” said McBride. “I hit a really nice flop shot. Rolled in the middle. That was a bonus. I had bogeyed seven and coming into the back nine there’s a few birdie chances so it’s important to hold your score.”

He gained another shot at the 10th after hitting his approach stiff and two-putted 15 for his final birdie. A closing bogey was disappointing but far from deflating.

“The last three on both nines are playing really tough,” he said. “It was a bonus to play them in one over, which wasn’t really that bad. I was happy enough because I’ve been struggling recently.”

Ruaidhri McGee also enjoyed a welcome return to form, firing five birdies in a bogey-free 67 to make his first cut since July.

“I haven’t been around on a weekend for a few weeks so it will be nice,” said McGee, looking ahead. “We’ll see what we can do.”

The 27-year-old switched putters overnight – swapping his first round TaylorMade for a Scotty Cameron – and enlisted a caddy for round two.

“I had my girlfriend, Madeleine, on the bag for the first half of the year and played great,” said McGee. “She hasn’t caddied since July. Now she is back. It’s good to have a bit of company.”

Having started with a triple bogey in round one, it’s been quite a turnaround for McGee. A 30-footer at 11 was the pick of his birdies in round two.

Conor O’Rourke is next best of the home players on two under. After saving par from 15 feet at the second, O’Rourke holed birdie putts from 18 feet at the 4th and 36 feet at the 7th. Gavin Moynihan is one shot further back after a 71.

It was a disappointing day for the rest of the Irish in action. Cormac Sharvin and Gary Hurley missed the cut by one. Jonny Caldwell (+4) and John Ross Galbraith (+4) also failed to progress as did Tim Rice (+5), Brendan McCarroll (+7), Cameron Raymond (+7) and Brian Casey (+7). There was no joy for Stuart Grehan (+8) and Tim Rice (+10) while Dermot McElroy (+8), amateur Tom McKibbin (+8), Luke Donnelly (+9) and Michael Dallat (+14) had too much ground to make up after round one.