Casey and McBride best of home challengers at Concra Wood 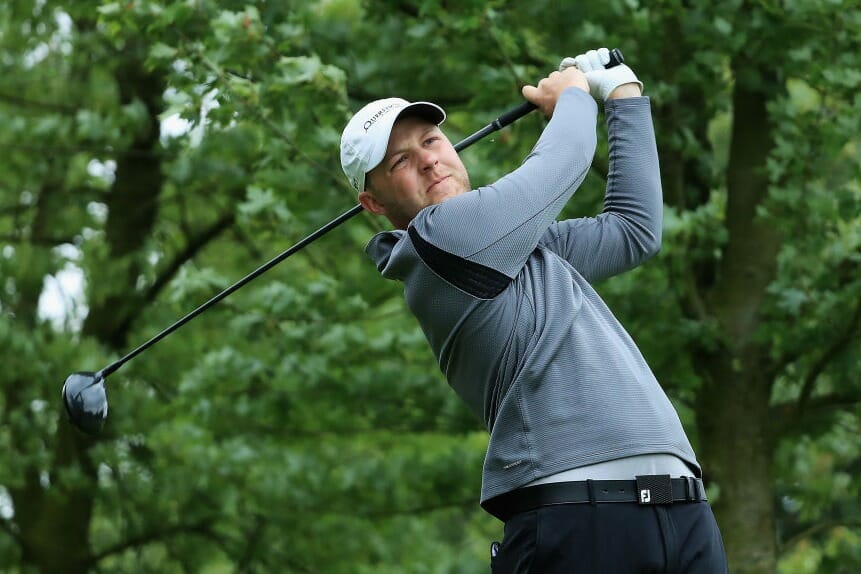 Casey and McBride posted rounds of 70 to finish two under, four shots behind overnight leader Rhys Enoch from Wales. Enoch carded a superb 66 in the morning, during the worst of the weather, to take a one-stroke lead.

Dusk fell before play concluded in Co Monaghan with five groups unable to complete their rounds. Strong winds, which gusted close to 30kph, wreaked havoc for many and the vast majority failed to break par. Of the 19 Irish players in action, Casey and McBride were the only ones to finish in red figures.

“There were a few holes where you had to hold on,” said Casey, who recovered from a poor start to put himself in contention.

The 27-year-old from neighbouring Co Meath found himself three over after three holes but he quickly bounced back and covered his last 10 holes in four under to give himself a timely boost.

“I need something good to happen because I missed out at Q School,” Casey explained. “I need a good result. I think it’s going to turn around.”

His six birdies included a 40-footer at the fifth. Casey’s accuracy with the driver facilitated neat approach play and now that he has a taste for the greens, his prospects seem promising. All the more so when he can return home to Navan each day, which is only 45 minutes away.

“It was great knowing I had a spot in the field from Team Ireland and not waiting until the last minute to find out,” said Casey. “I was able to plan my season around this. I remember in 2016, I got a lot of last minute calls and that’s not very enjoyable. I remember one week in France I was a reserve until Thursday morningand I got in but it’s tough to switch on.”

McBride, like Casey, secured his entry through Team Ireland Golf and a closing birdie left the Dubliner inside the top 15. The 22-year-old mixed four birdies with two bogeys and is well positioned going into the second round.

First round leader Rhys Enoch sits on six under, one clear of a three-man group tied for second.

“It is probably up there with one of my best rounds of the year,” said Enoch. “It was pretty cold and pretty drizzly. Six under in those conditions is always a pretty good round.”

With the top 60 and ties progressing to the weekend, the cut currently stands at plus one. Gavin Moynihan, Conor O’Rourke and Neil O’Briain are well placed on level par after posting 72 while Kevin Phelan and Cameron Raymond will resume from level par in the morning.

John Ross Galbraith, Tim Rice, Niall Kearney and Niall Kearney all carded 73. There were 74s for Jonny Caldwell and Ruaidhri McGee; Brendan McCarroll and Stuart Grehan had to make do with 75 (+3); Gary Hurley took 76.

A nine at the last ruined Dermot McElroy’s round. He lost two balls off the tee and had to sign for 77 as a result, the same mark as Luke Donnelly. Teenager Tom McKibbin shot 78 and Michael Dallat finished on 81.

The remaining five groups will conclude their final holes of round one on Friday morning at 8.30am. Round two will begin as per original published times.