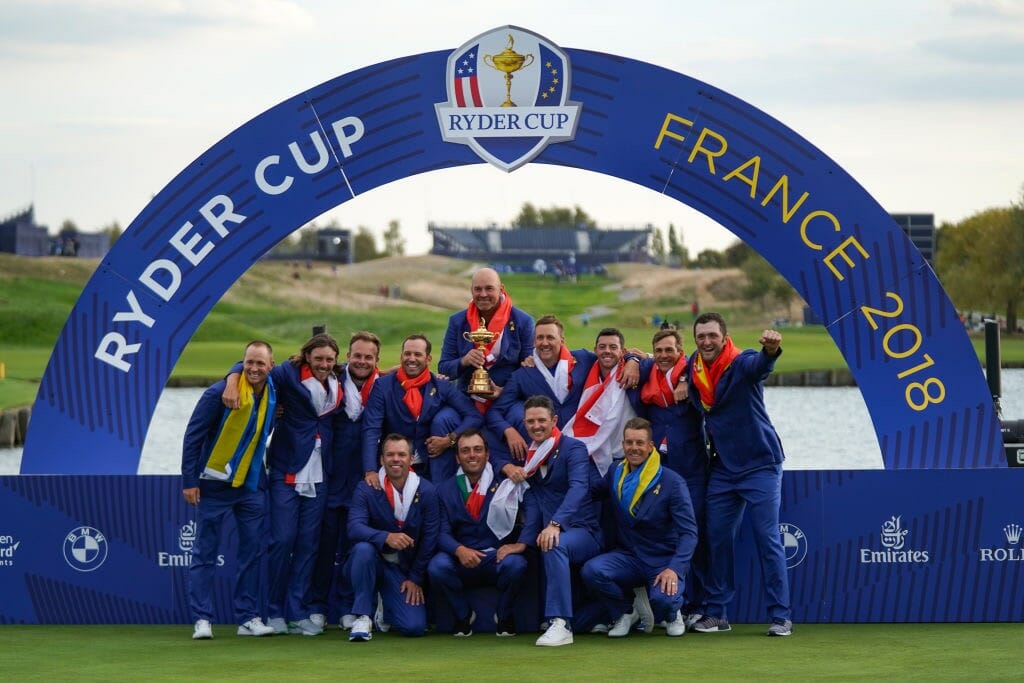 What a Sunday that was at Le Golf National! All the talk before the event was of the American Team and how strong they were but the European Team was quite simply outstanding in handing the USA side the second largest defeat in the history of the event since Continental Europe joined the fray in 1979.

Looking at the teams on paper on Friday morning you’d have been forgiven for thinking that it was over before it had even begun.  The names of the Major Champions, mostly down one side of the sheet, along with the other household names mixed-in left hope, rather than expectation, as the overriding emotion for Europeans.

However, the team dynamic, unity and ‘oneness’ that Thomas Bjorn instilled into his European side won through for them and they proved once more that a European Ryder Cup side is much stronger than the sum of its parts.

Having been beaten 3-1 in the opening session on Friday they may have been expected to be a little down coming out in the afternoon but a whitewash of the Americans on Friday afternoon followed by a 3-1 win on Saturday morning left the US Team in some disarray and it could have been much worse for them only for a 2-2 draw on Saturday afternoon.

The stars of the European show were undoubtedly Rookie Tommy Fleetwood and his dance partner Francesco Molinari. Winning four points from four in the fourballs and foursomes was unbelievable. The manner in which they did it, and against who they did it, made it even moreso. They were simply unstoppable and it was understandable that Fleetwood didn’t have much left in the tank on Sunday when he faced Tony Finau as he had been running on pure adrenaline for two days!  For Molinari, it was fitting that he was the one to snatch the winning point for Europe and the scenes that followed were of pure joy.

Let’s reflect for a moment on the Captains Picks, so much a part of most Ryder Cups – but a major part of this one.  Much was made of these when they were announced but Bjorns picks of Poulter, Garcia, Stenson and Casey were outstanding.  Garcia was a man reborn and while he hasn’t had a good season he showed absolutely no signs of it. It is amazing what a Ryder Cup can do for your game!  Poulter was another one. The ‘Postman” as he has become affectionately known didn’t have much form coming in but OMG did he deliver!  Casey did what we all expected and was solid as a rock and the Iceman Stenson was as cool as always in securing points.  All in all Bjorns picks accounted for a whopping 9.5 points.

On the flipside Furyk picked Woods, Mickelson, DeChambeau and Finau who between them managed a paltry two points overall and there were signs of discontent in the camp with Captain America himself, Patrick Reed, hardly hitting a fairway, hardly being noticed, then being rested before giving it the ‘Ssshhhh” to the fans when he claimed his point in the singles. There were whispers of the fact that he wasn’t paired with Jordan Spieth as they had been before but this is the Ryder Cup as being one of the reason but surely he’d been told to ‘just get on with it and play your best’!

Furyk and Bjorn made for marvellous Captains too.  Magnanimous in defeat, Furyk praised the Europeans and their passion as well as showing some love for his own team. We can expect a backlash from the USA no doubt but whether it comes in the form of Furyk being thrown under the bus like Tom Watson was remains to be seen. From the outside it looked like he did a stellar job and few would have argued with him on Thursday night before the event. His players didn’t perform for him and that’s about it.

For Bjorn, it was the culmination of two years of hard work. His attention to detail was superb but more over than that he managed to gel a group of multi-millionaires together in a way not seen since McGinley did it at Gleneagles in 2014 and that was the difference in the end.

All-in-all it was another amazing event at a venue designed to host great events. A much hoped for but unexpected European victory, particularly by such a large margin, gives us great hope of things to come and if there’s a place to sign a petition for MoliWood to be given advance captains picks for 2020 we’ll gladly put our name on it!