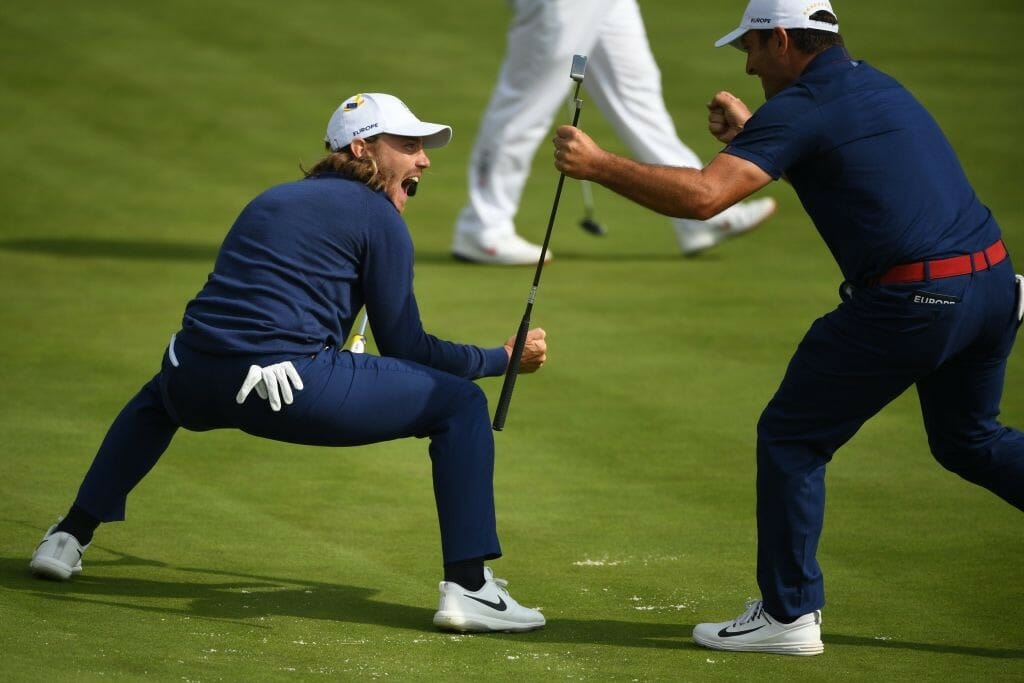 Tommy Fleetwood admitted to being “a little bit emotional” after he and Francesco Molinari became the first European pair in Ryder Cup history to win all four matches as Europe established a 10-6 lead at Le Golf National.

Fleetwood and Molinari’s victory followed a 2 and 1 win for Henrik Stenson and Justin Rose over Dustin Johnson and Brooks Koepka, while Bubba Watson and Webb Simpson beat Sergio Garcia and Alex Noren 3 and 2 and Jordan Spieth and Justin Thomas were 4 and 3 winners against Rory McIlroy and Ian Poulter.

“A little bit emotional right now – we’re only on Saturday,” Fleetwood said. “We were really, really good this afternoon.
“We played really solid, we played really well. The piece of history together – it’s very special.”

Molinari added: “We came here to do a job, and it wasn’t to go in the records books or anything like that, it’s about the team, it’s about getting to 14 1/2.
“We’re getting closer, but those points we’re going to need tomorrow, we’re going to have to fight hard for them. It’s not going to be easy.”

The 10 – 6 lead leaves Europe on the brink only needing 4.5 points to claim back the Ryder Cup and the singles matches have shown up some great showdowns.
Rory McIlroy will kick off when he faces Justin Thomas in the opening singles match at 11am.

Bjørn has opted for four-time Major winner McIlroy to get that charge under way, with Paul Casey out second against Brooks Koepka.
World Number Two Justin Rose then faces Webb Simpson in the third game out, before Jon Rahm takes on Tiger Woods.

Bjørn has opted for Swedes Henrik Stenson and Alex Noren to anchor the session, with Bubba Watson and Bryson DeChambeau their respective opponents.

The stage is set for an epic day of action especially if early momentum swings towards the American pairings. Europe overturned a 10 – 6 deficit at Medinah in 2012 so today is by no means a formality.

If you fancy a flutter, our partners at Boyle Sports are offering Acca insurance for today’s singles. If you place a 4 line or more accumulator and one leg loses you get your stake back as a free bet. They also have a great signup bonus for opening a new account. Click HERE for all info Or on the banner above this story

Share
Facebook
Twitter
WhatsApp
Linkedin
Email
Print
Previous articleMaguire on the move at Symetra Tour IOA Classic
Next articleAre we seeing the last of the Irish in European Blue?

Sam’s the man at Irish Boys in Thurles

Portumna’s Sam Murphy captured the Irish Boys title in style with a final round 65 (-7) to give him an eight stroke victory on 12-under par.
Read more
Club News

In acknowledgement of his character, sportsmanship and dedication to charitable giving, Zach Johnson has been named the recipient of the PGA Tour’s Payne Stewart Award
Read more
Irish PGA News