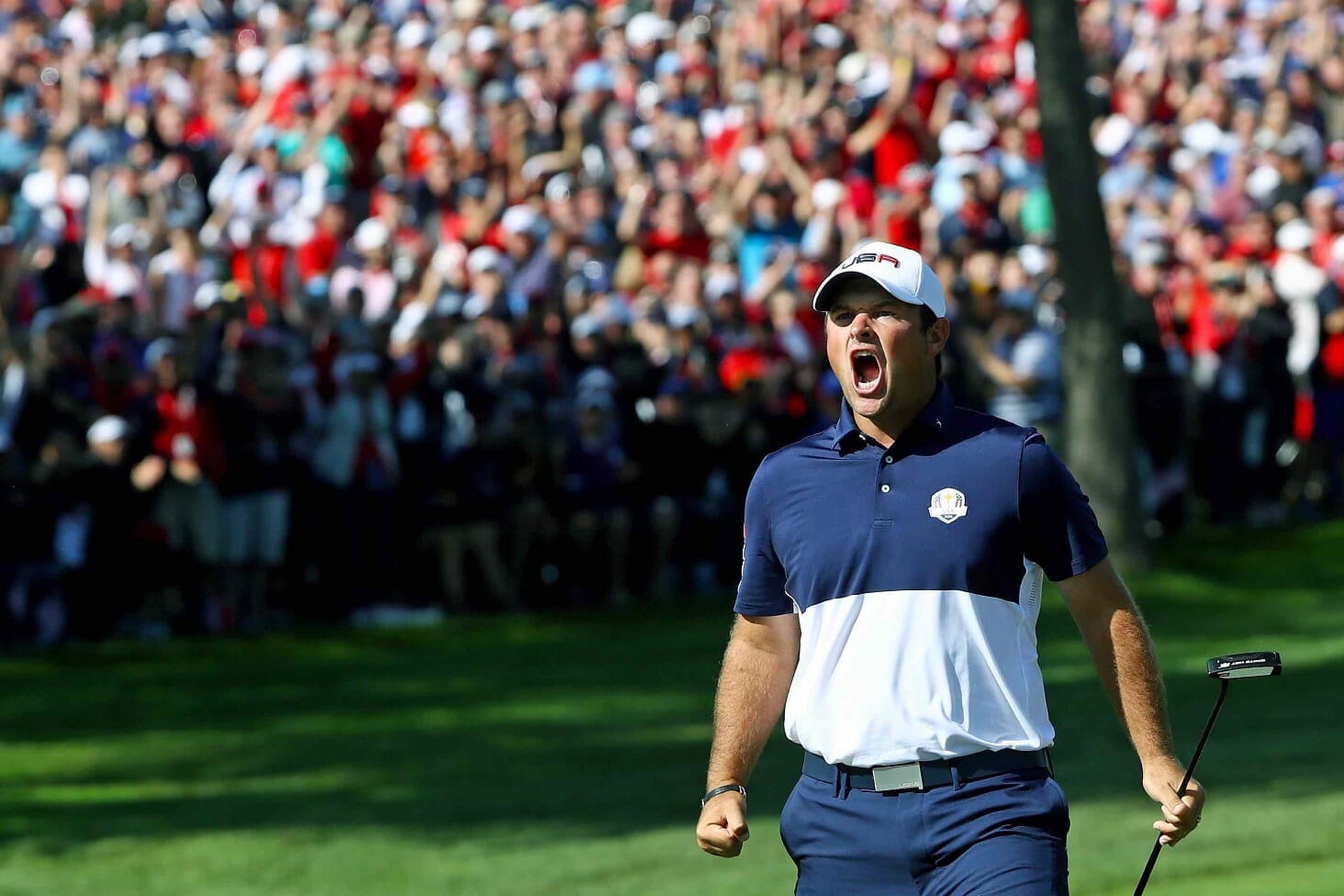 Four years ago at Gleneagles he humbled Henrik Stenson.  Two years ago at Hazeltine he cut Rory McIlroy down to size and now at the 2018 Ryder Cup Patrick ‘Captain America’ Reed is keen to tackle ‘Mr. Ryder Cup’ – Ian Poulter.

Patrick Reed made his Ryder Cup debut in 2014 and while on a losing side, he could be proud of being among just four Americans to win the lopsided Sunday Singles in defeating Stenson 1up.

In 2016, it was Reed winning 1up over McIllroy in the opening Sunday Singles encounter that continued the American dominance in winning the 44th Ryder Cup.

While history records Reed won, it was the nature of he and McIlroy”s encounter that still has golf fans talking 24-months later and Reed knew he would be asked about it in attending the Le Golf National media centre on the outskirts in Versailles.

Reed and McIlroy threw everything at each other that Sunday, everything maybe except the kitchen sink, and in one of the hardest-fought yet sportsmanlike matches seen for many year at a Ryder Cup.

Reed, who went onto the win the Masters earlier this year, was asked if he has ever been so ‘amped-up’ for a game of golf against Europe’s leading 2016 qualifier.

And reliving his 17 holes head-to-head showdown with McIlroy, Reed revealed a key part then vice-captain, Tiger Woods played in the Texan’s victory.

“I didn’t think I could ever get that amped up. I was just so through the roof, that during warm-ups he’s watching me warm up and he’s just like, ‘He needs to calm down. He needs to chill out’. I was hitting the ball sideways,” said Reed.

“Tiger pulled me aside. Kind of cracked a little joke to calm me down a little bit, and I was able to bring that adrenaline level down to manageable rather than sitting there on high rev.”

“It’s something that was hard to do. Make sure you stayed in that mind frame and also that level you could play at. You get so amped up, it’s hard and you only have 18 holes.”

“The good thing is I’ve been able to manage that really well, and luckily I was able to have Tiger there to kind of help me out there on Sunday.”

“You know, once that match was over against Rory, there was a sigh of relief, not only to win the match, but also Rory and I, just the amount of energy physically and mentally that we put out on that 18 holes;. We were glad that, well, I was glad that it ended the way it did, but I think we were both glad that we went out and played the great golf that we did and were able to show the passion that we had for each side’s team, each side’s country and go out and play the golf we did to finish off the year.”

And while McIlroy will no doubt be trying to get even this week, if the two captains were to choose them as rivals for the Sunday Singles, Reed was asked if he fancied tacking Ian Poulter.

“It would always be great playing Poults,” said Reed. “We have been kind of looking at the guys on the team, with how stacked each team is from top to bottom on the U.S. side and the European side, I’ll take any of them. All of the guys are playing some great golf. I’ve always been the type that I want to go up against their best guy, and so on Sunday, I want to go up against who whoever is playing the best that week.”

“I love that challenge and I love to go out and go out and play their guy, and the first year it was Stenson. Last time it was Rory.”

“So it’s just one of those things that I enjoy going out and playing the guys that are playing the best, but you know, the great thing is I feel like with both squads this year is it doesn’t matter if you’re the guy who got in on points as No. 1 or if you’re the last pick of the captain; it does not matter. I mean, any one of those guys, they play the golf they are capable of, they are going to be hard to beat no matter what.”