McIlroy delighted but disappointed with a 62 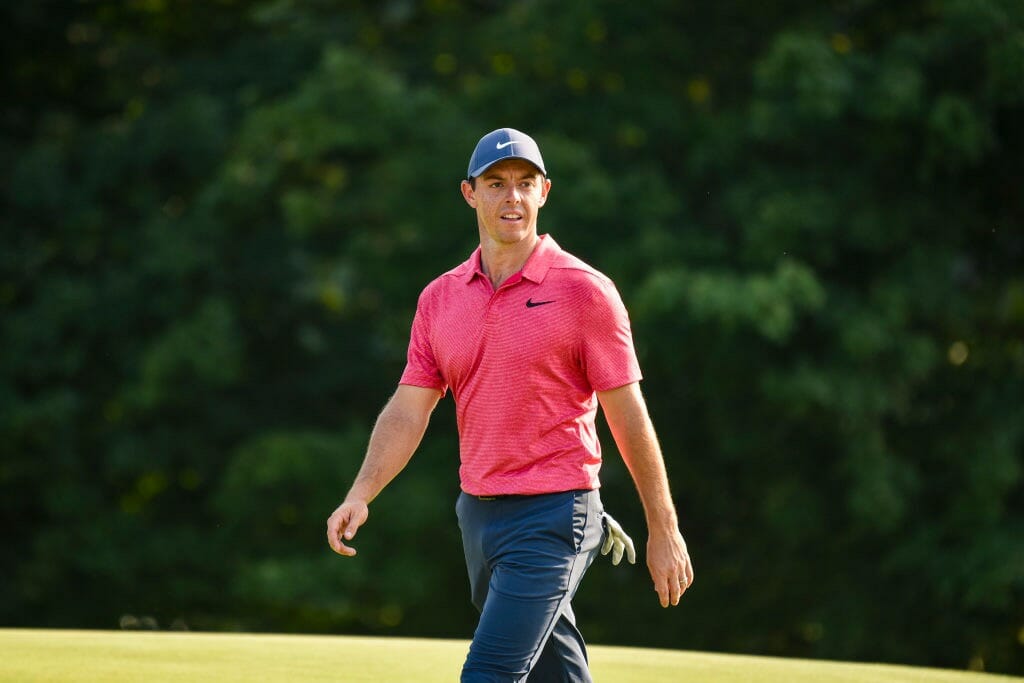 Rory McIlroy let slip a chance of joining golf’s ultra-exclusive ‘Mr. 59 Club’ with late round back-to-back bogeys as he joined Tiger Woods in the lead with a 62 on day one of the BMW Championship in Philadelphia.

For Woods, it is a first time he’s shared the lead at the end of any round since leading for all four days in capturing the 2013 – WGC Cadillac Championship.

McIlroy had been a shot clear of Woods at nine-under par through 15 holes when Woods headed to the clubhouse with his lowest round all season, and also his lowest score in five years.

The World No. 8 ranked McIlroy had raced to three-under par with a trio of opening birdies and ignited hopes of a first European-born 59 on the PGA Tour with a sizzling run of six birdies in succession from his 9th to 14th holes on the Aronimink course. But the brakes were on when McIlroy three-putted his 16th for bogey and then did the same at the next while there was hardly any joy in two-putting his last for a 10th birdie of his day.

“What was worse was probably just not giving myself a better chance to shoot the 59,” McIlroy said.

“I can accept bogeys. Definitely I can accept a bogey on a hole like on the 8th (his 17th) hole and the bogey on seven his (16th) wasn’t good but you don’t get many opportunities to break 60 and today was one of them and I didn’t capitalise.”

“Look, geez, if someone had given me a 62 on the first tee this morning I would have taken it. So, it’s a great way to start the golf tournament. My game feels obviously in really good shape. There’s a lot of good signs out there. My approach play, my wedge play has been much better. I putted well.”

“Basically I did everything well and looking forward to getting back out there early in the morning and trying to get it going
again.”

McIlroy and Woods had played a nine-hole practice round together on Tuesday and while Woods skipped Wednesday’s Pro-Am, McIlroy gave an indication of what lay ahead in birding eight of the opening nine holes.

McIlroys effort is still his lowest round all season since a pair of 64s earlier in the year, one of those a last round 64 to capture the Arnold Palmer Invitational. His lowest PGA Tour round was his third round 61 in 2015 to ride off with a second Wells Fargo Championship winning strong box.

“I was then 9-under through 14 holes today and I’ve played like a 17-hole stretch in these two days in 27-under par and that is pretty good,” McIlroy added.

“I was thinking of possibly breaking 60 after the sixth birdie in a row on 14 to get to nine-under. I needed to birdie two of the last four holes, and with a par-5 being one of them. But the bogey on my 16th was not good while the bogey on the next I just didn’t hit a good tee shot and a bogey there was not the end of the world.”

“Though I wish I had of capitalised on 16 and 17 but then it’s still a great round of golf.”

Woods had also ignited thoughts of a career first 59 in producing an eagle and four birdies, and in the process recording just 13 putts, in a six-under par 29 front nine.

Woods credited his lowest round all season to a decision to return to the putter he won 13 of his 14 Majors with after taking two putters into his only practice round on Tuesday in the company of McIlroy, with  one of the those being the winning ‘Scotty Cameron’ he used today.

“I’ve been monkeying around with the Scotty Cameron back home and in the backyard, so it felt good,” he said.

“I’ve hit hundreds of millions of putts. I’ve had it since ’99. I’ve hit putts with it so my body just remembers it. I made a few putts today and also from right out the gate with birdies at 10 and 12 and 13 so that was a nice way to get things rolling.”