With the Boston clubhouse in sight, Rory McIlroy was nearing boiling point. His frustration finally boiling-over after missing a makeable six-footer for birdie on the final green on day three of the Dell Technologies Championship at TPC Boston.

McIlroy had jumped nearly 20 places from his second-round overnight position at four-under par to be sharing third place after a seventh birdie of his round at the 13th before completing his closing five holes in one-over par and in a round of 66.

In missing his putt on the last, McIlroy angrily waved the putter in the air and then slapped the face of the club before throwing the club in the direction of his golf bag and he was clearly in no mood for any sort of a fireside chat as he headed the scorer’s room, located in the bowels of the stunning clubhouse at nine-under par and for a third day running declining for a third day running a request to be interviewed by SKY TV.

He had spoken to this journalist following both Friday’s and Saturday’s effort and his comments were very much a mirror of his third-round play. Once again, it was one of those ‘should have been rounds’ with the World No. 7 finding no luck and turning what should have been a 63 or 64 into a clearly frustrating 66.

“While my 67 could have been a 64 but at least I am playing the sort of golf I am giving myself an opportunity to shoot a 63 or a 64 again,” he said on Saturday. “So, you have to take the positives from that and if I could go out and shoot a 64 or a 65 tomorrow I am right in it, and we still have 36 holes to go.” 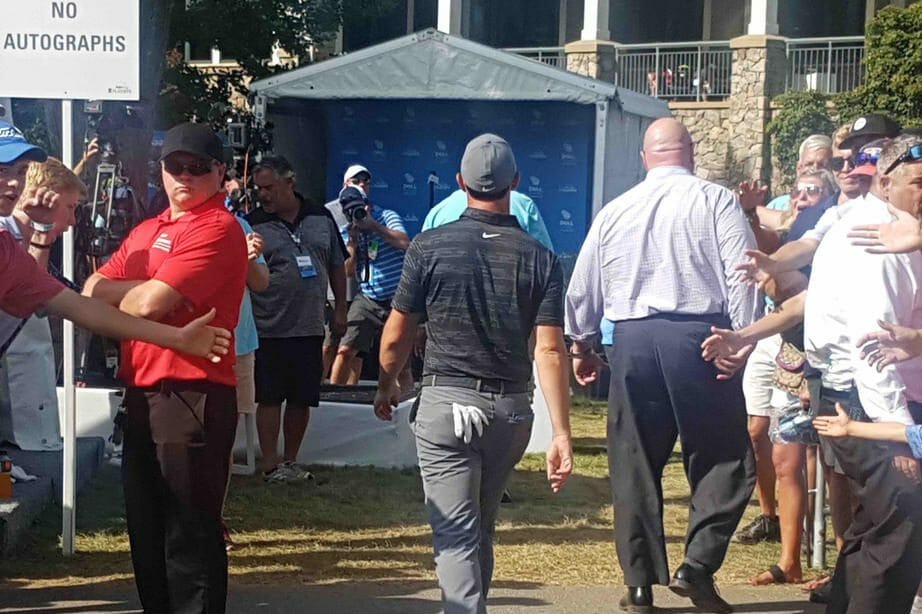 McIlroy headed straight for the scorers hut / Image from @TourMiss

Mcllroy headed into day three of the event he’s won twice before by birding three of his first four holes and while he dropped a shot on five, he regrouped with birdies at seven, nine and ten.

He drew a huge applause from the Boston sports-mad fans at the par-4 14th when he landed his 134-yard wedge shot to just two-feet for birdie but his round was about to sour at the par-3 16th when his tee shot ricocheted off some rocks below the green and bounded into the water.

McIlroy was miffed, mouthing “wow” in the direction of his caddie. “Yeah, I hit it good,” he remarked, placing the blame on his club selection.

His troubles continued on the 17th green when his second shot was some 13-feet short of the hole and behind the flag.  McIlroy took plenty of time to read the putt and rolled the ball on a solid line, but it bobbled off the left edge.

There was another audible sigh from the four-time Major winner.

Then at the last, McIlroy found a greenside bunker with his second shot and then with his third, McIlroy found himself six-feet from the hole and starting at birdie. A par is not what McIlroy wanted and he showed his disgust.

Bryson DeChambeau, coming off last week’s win in New Jersey, brilliantly upstaged playing partner, Tiger Woods finishing birdie, birdie, eagle in a sizzling round of 63 to grab the then clubhouse lead at 12-under par before Mexico’s Abraham Ancer posted a round of 65 to lead by a shot at 13-under par.

DeChambeau, along with Woods and Phil Mickelson, are certainties later tomorrow (TUES) evening at 10pm Irish time, to be named by Jim Furyk as three of his four Versailles ‘wildcard’ picks and Woods, who said last week in New Jersey, he would love to partner the player 17-years his junior, was again impressed the fellow Californian-born golfer.

“It was fantastic to play with Bryson, he’s great,” said Woods who struggled in shooting a 68 for a seven-under total.

“This is the first time I’ve ever played with him in a tournament round.  We played in practice rounds quite a bit this year and he’s fantastic.”