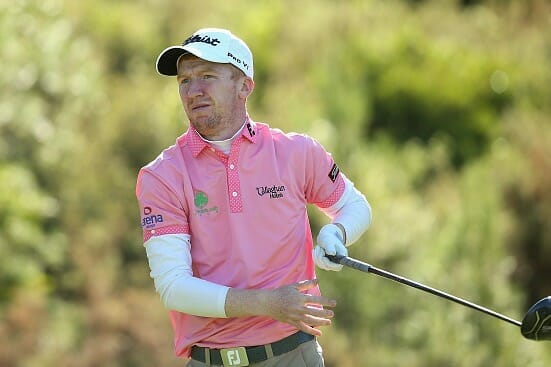 It proved to be a fruitless week for both Gavin Moynihan and Ruaidhri McGee back in top company as both players bowed out at the halfway stage of the Porsche European Open in Germany.

With both players up against it after disappointing opening efforts, Moynihan showed good fighting spirit in his two-under-par 70 this afternoon but his three over total was still three too many with the cut falling at even par.
As for Rosapenna’s McGee, he never fired over 36 holes and added a three-over 75 to his crippling 79 on day one to finish near the bottom of the pack at plus ten.

There was no such fears for mad scientist Bryson DeChambeau who retained his overnight lead, but the American will have a host of star names breathing down his neck at the weekend with green jacket holder Patrick Reed and fellow former Masters winner Charl Schwartzel, as well European Ryder Cup hopefuls Alexander Levy and Paul Casey, all in contention.
The World Number 23 from California holds a one-stroke advantage for the second day running but could have moved two shots clear only for a missed eagle putt at the last, settling for a sixth birdie of the day, a four under 68 and a ten under total.
“I’m absolutely satisfied,” said the always interesting competitor. “The wind made playing pretty tough out there and I was fortunate enough to hit it in the right spots, miss it in the right spots, get a couple of lucky breaks and take advantage of them when I needed to.
“I also made some mistakes out there too but hopefully we can clean those up tomorrow and shoot a good one as well. If I can strike the ball just a little bit better here and there then I’ll play a little bit better and be really deep under par.

“I think the main thing I’ve got to focus on is executing the right shots and making good decisions with the wind.
“It wasn’t my best form but I got it around, shot four under and I stay in the hunt. Just a little frustrating off the tee today, I thought I’d worked something out yesterday and it worked a little bit but I’ve got to go back to the range and work a little harder.
“I left a couple out there but also made a couple of key ones so it averaged out.”
Englishman Richard McEvoy, who won wire-to-wire on the Challenge Tour just last week at the Le Vaudreuil Golf Challenge, carded the joint lowest round of the week – a seven under 65 – to move into a share of second place with Austrian prospect Matthias Schwab.
Reed signed for a six under 66 to move into the mix at Green Eagle Golf Courses, while Levy – playing alongside European Ryder Cup Captain Thomas Bjørn – was a shot further back on eight under after a 68.
Casey, another hopeful for Le Golf National in September, is four shots off the pace heading into the weekend after a second round 69, while 2011 Masters Champion Schwartzel carded the same score for a five under total.