McIlroy slumped to an opening 80 at Shinnecock Hills 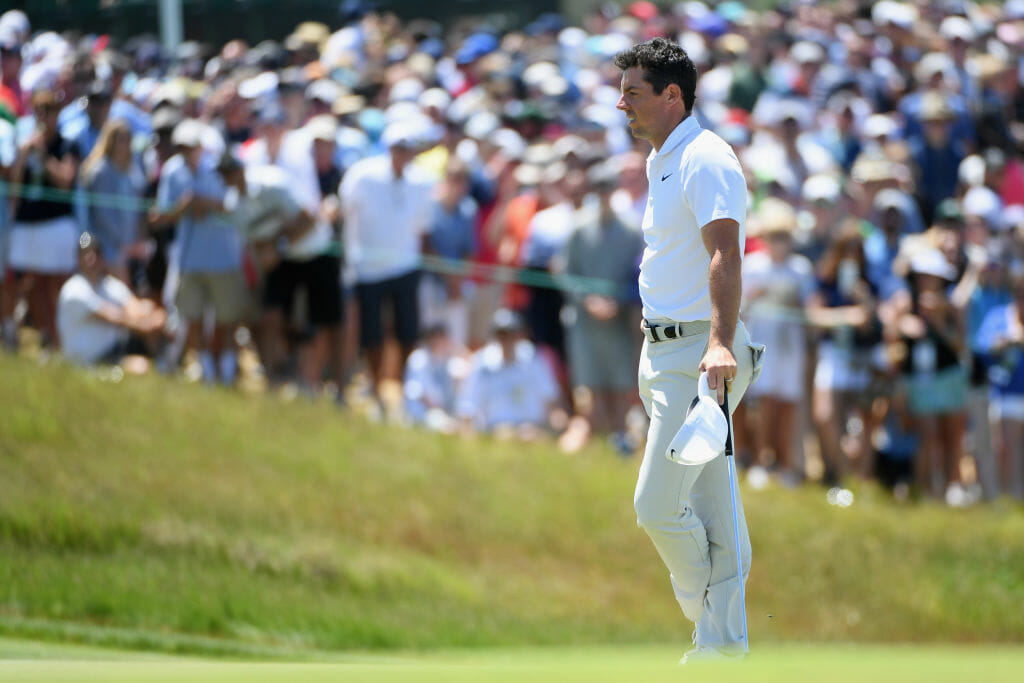 Rory McIlroy slumped to his equal worst score in a Major posting a horror 80 on day one of the U.S. Open at Shinnecock Hills.

McIlroy’s 10-over par tally sent him crashing to then a share of 100th place in the bright but very unforgiving and testy windy conditions.
McIlroy showed no real benefit of spending the past week on Long Island managing just three birdies but signing a scorecard also showing seven bogeys and three shock double-bogeys.

The four-time Major winner headed to the sanctuary of the clubhouse sharing 100th place and miserably trailing a distant eleven shots adrift of the then leading  duo of Ian Poulter and American Scott Piercy who signed for one-under par 69s
Poulter grabbed just as many birdies as McIlroy but unlike the Ulster man the 42-year old reigning Houston Open winner dropped just two shots and in his first U.S. Open since 2015.
Poulter and Piercy were joined on -1 by world number 1 Dustin Johnson and Scott Henley.

McIlroy’s shock showing in a 38th Major is the third occasion he’s shot 80 in a Major.   The first was on day two of the 2010 Open Championship on the Old Course at St. Andrews.   McIlroy had equalled the course record a day earlier and in fairness he was out in the half of the draw that got totally blown off the course as he brilliantly bounced back two days later to share third place at the Home of Golf.
And there was McIlroy’s sad 2011 Masters meltdown when he posted a final round 80.
McIlroy will not want to learn that in the three occasions Shinnecock Hills has hosted the U.S. Open only one player, and that was Ray Floyd in 1986, has won after a first round over-par tally.

Floyd had posted an opening 75 twenty-two years ago to win by one shot on one-under.
And McIlroy’s two playing partners in Jordan Spieth and Phil Mickelson also had little to boast about with Spieth signing for a 78 and Mickelson, who needs a U.S. Open win to join the ‘Grand Slam Club’, a 77.
In fact, the so-called ‘feature’ of the morning were 25-over par with Spieth managing just two birdies and ‘Lefty’ one.
Little wonder the trio were in no mood for even a short fireside chat after their rounds though Spieth, and to his credit, did offer a few words.
“It was very difficult,” said the Texan. “I got it off to a good start. It was hard after that. You just have to stay patient and understand that you are going to shoot 4- over plus once you are 4-over through two holes.

“I just tried to do a little too much on the second hole and it kind of bit me. From there it was just kind of a grind. Played pretty well to be even through the rest of the nine and then just didn’t make very good swings.
“There were certainly some dicey pins but at the same time there was guys that shot under par. So, I could have played better.”
In contrast, Poulter delighted in talking at length after his round that included three birdies and two bogeys, and a best start to a U.S. Open since a pair of 70s to kick-start his 2014 U.S. Open.

“It felt pretty good as the U.S. Open hasn’t been good for me through the years,” he said.
“It’s the first one I’ve played in three years, and this is the first one I ever played back in ’04.
“So, to come here and enjoy the first round is really quite nice.
“My game’s good. I feel confident. I feel happy. I feel happy off the golf course. And it makes that a lot easier on the golf course.
“So, I’m in a really good, good place. I don’t want to get carried away. This is day one of four extremely tough days, and three bad holes on this golf course can take you home pretty quick.”
McIlroy was looking set for the weekend off after just five holes when he bogeyed his second and third and then took double bogeys at his fourth and fifth to slump to six-over par.

A birdie at seven only halted the slide as McIlroy then bogeyed his seventh and ninth holes to make the turn in a seven-over par 42 and having missed seven of the nine greens in regulation.
McIlroy then headed to Shinnecock’s opening hole and the 10th of his round and where the fairway is 60-yards wide but even with a 2-iron in his hand the World No. 6 had the crowd scattering in being right and 30-yards off line.
The long grass caught his second shot that crossed the fairway to still in deep rough and 43-yards shy of the flag but only for McIlroy to send his third into a greenside bunker on route to a third double-bogey ‘6’ of his round.
He got back to eight-over with back-to-back bogeys at his 13th and 15th holes but proceeded to hand both shots back with bogeys at his 16th and final holes.
It is now the third U.S. Open in succession McIlroy has virtually shot himself in the foot on the opening day of the championship.
McIlroy shot a 77 on day one of the 2016 U.S. Open and then missed the cut while he went to Erin Hills and sign for a day one 78 that also saw him eventually sit out the weekend.