McIlroy has another frustrating putting day at Sawgrass 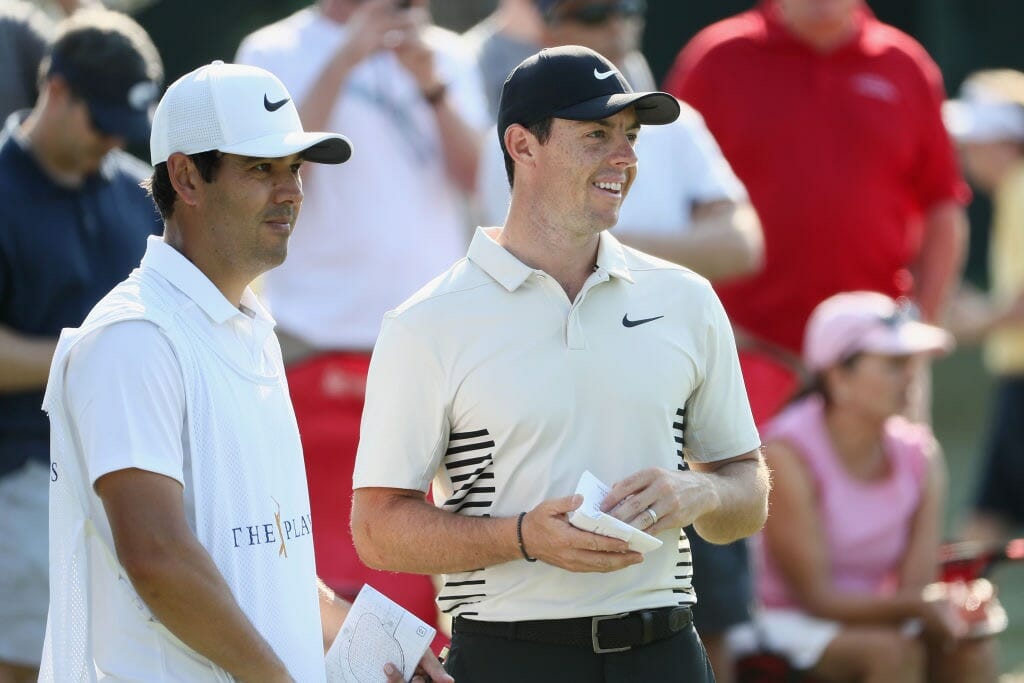 Rory McIlroy produced a another frustrating putting display on the opening day of the Players Championship in Florida.

McIlroy missed a bunch of birdie putts and was clearly mis-reading his ‘lines’ in a one-under par 71 in glorious conditions on the TPC Sawgrass course.

Even so, McIlroy recorded a respectable 30 putts that included four one-putts, 10 two-putts, one three-putt and chipping-in from off the green at the 13th hole of his round.

The effort left McIlroy already trailing five shots behind World No. 1 Dustin Johnson who is among six players in a log-jam tied for the lead at six-under par.

Joining Johnson atop of the TPC Sawgrass leader board is fellow U.S. Open winner Webb Simpson along with compatriots Chesson Hadley, Matt Kuchar, Patrick Cantlay and in-form Swede Alex Noren. Of note, five of the leading six, with the exception of Kuchar, began their first rounds from the 10th tee.

Johnson, who has been World No. 1 for 64 weeks, is under siege by those ranked No.s 2 to No. 5 inclusive in the world and he answered the challenge as only the 33-year old knows best.

McIlroy managed four birdies and three bogeys in 13 holes before ending with five pars and then failing to even hit the hole with a 16-footer for birdie on his last. The World No. 8 commenced his round from the 10th and soon raced to two-under par with birdies at the 11th and 12th holes.

The pick of the two birdies being finding the green pin-high right at the short par-4 12th with a 316-yard blow to 34-feet right of the hole and two-putting for his birdie. But McIlroy then gave a shot back at the next before rising to the challenge with a birdie at the par-5 16th.

McIlroy then had the fans around the famed par-3 17th on the edge of their seats with his 55-foot birdie putt from near the edge of the island green. He started his putt well left before it took a clear right turn some 15-feet from the hole and only just missed finding the bottom of the cup.

Frustratingly, McIlroy then put his next tee shot into the water left of the 18th for a second outward half bogey and head to his 10th at one-under par.

McIlroy was then in trouble with his drive into rough at the second or his 11th hole in posting bogey before getting back to one-under with a stroke of brilliance in holing a 40-foot chip for birdie at the fourth hole or the 13th of his round.

“I had some chances that I didn’t take advantage of, but then I got up-and-down a couple of times and chipped in and so, yeah, it was okay.
Looking at the scoreboard, it looked like it played easy out there but our group didn’t feel like that, with what we shot. But I guess there wasn’t much wind and greens were pretty receptive so you could have shot a low one. I’ll hopefully make a few more birdies tomorrow.”

However, McIlroy’s effort was not as bad as playing partners World No. 2 Justin Thomas and World No. 4 Jordan Spieth who gave fans little to cheer about.

Thomas posted a one-over 73 while Spieth struggled in signing for three-over par 75.

Included in Spieth’s round was just two birdies but also four bogeys and a 13th hole double-bogey.

“I played with both of those guys before in tournaments and it was actually quieter out there than I thought it would be,” said McIlroy.

“It wasn’t bad. It was a nice morning round, I didn’t feel like there was any more atmosphere out there than there usually would have been.
That might be a little bit different tomorrow afternoon, I’ll take a look and see how the that group gets on this afternoon and see what that’s like, but it was nice, it wasn’t anything out of the ordinary.”

Shane Lowry, the only other Irishman in the field, ended his outing with a score of a three-over par 75.

Sticking out like two sore thumbs on Lowry’s card is a double bogey at the par-4 14th, that he was playing as his fifth hole, and a double in finding the water at the famed par-3 17th.

Lowry had birdied his third and fourth holes but then ended his day with bogeys on two of his closing three on the seventh and ninth.