Paddy puts Padraig under pressure ahead of Father & Son

Padraig Harrington’s 14-year old son Paddy has put real pressure on his illustrious triple Major winning father heading into Saturday’s opening day of the Father-and-Son event in Orlando. “If we win, I’ll be saying I carried him and if we lose, it will be all his fault,” declared a smiling Paddy Harrington.

The Harrington’s are making their debut in the ‘Major Champions Only’ team event being staged on the Ritz Carlton Grande Lakes course just minutes from the front gates of Disney World.

Also in the field is 18-time Major winning Jack Nicklaus partnering his grandson, Jason plus six-time Major winning Lee Trevino now aged 78 a year younger than the ‘Golden Bear’, who is teaming with Daniel, the youngest of his six children.

The Harringtons got their first look at the course on Wednesday playing nine holes before a lunch break and then tackling the back nine in the afternoon and ending their day with some 90-minutes together on the range.

The father and son teaming seem to get on well and with Paddy benefitting not only from his father’s advice but also from Harrington’s long-time caddy, Ronan Flood. And after a handful of wedges and short-irons young Paddy, who normally plays off a 27-handicap but will be off scratch like all other son’s this week, was hitting the driver around 250-yards.

As well, father and son are sporting identically coloured Wilson Staff bags, albeit a shoulder version for Paddy, with each also boasting identical ‘Ladybird’ head covers. 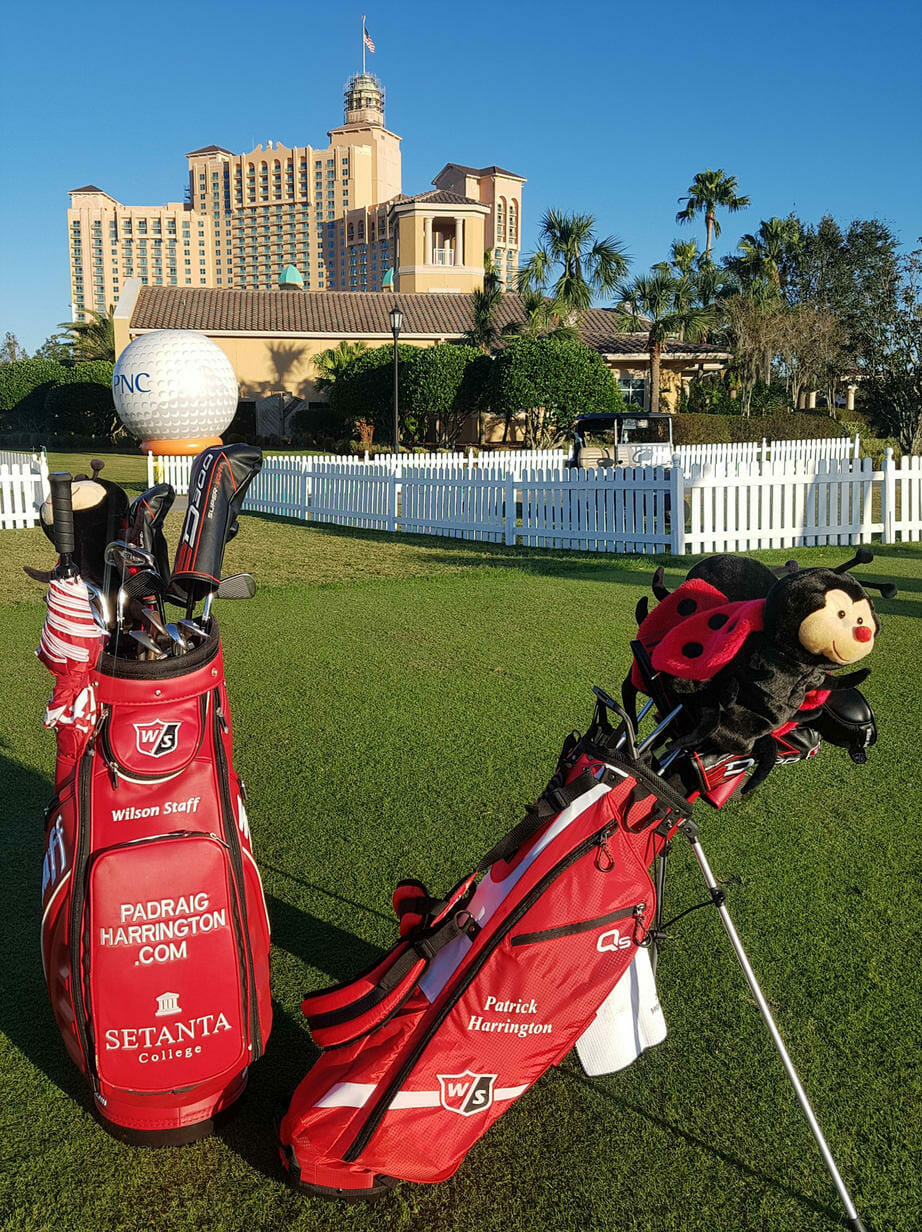 “The irons Paddy’s got in his bag are so new they haven’t even been released yet by Wilson, and won’t be until the New Year,” said Harrington but there was no mistaking Paddy’s bag as he had the name ‘Patrick’ on it.

It had been then four-year old’s Paddy’s remarks to his father on the presentation green at the 2007 Open at Carnoustie if he could fill the famed Claret Jug with Ladybird beetles that soon led to Harrington senior to carry a ‘Ladybird’ head cover around the globe.

Paddy who still has four years left at school and loves his rugby more than watching his father compete, remembers little of that day on Sunday 22nd July, 2007.

“I don’t remember running onto the 18th green but I do remember saying to dad if I could put Ladybirds into the Claret Jug,” he said.

“I also remember sitting with mum at the 18th hole before the play-off but that’s all I really remember. As for the picture of mum and dad and myself, I think it is buried somewhere in the study (smiling).”

It was Paddy’s school friend, Ethan White who had been pivotal in the Harrington’s teeing-up in Orlando this week.

“Ethan’s parents had been bringing him to the event in the past and he came back last year and kept saying to Paddy ‘Hey, your father has won three Majors why don’t you both tee-up in the Father-and-Son so here we are,” said Harrington.

“So we have to thank Ethan and he is going to caddy for Paddy this week.”

Harrington earlier this year bumped into Alistair Johnston, who served as the long-time CEO of Arnold Palmer Enterprises, who quizzed Harrington if he would consider entering before Harrington confirmed to Johnston at this year’s Open Championship he and Paddy would tee-up.

“My dad came to me and asked if I wanted to play in the Father-and-Son and I said straight away ‘Yes’ and ever since then it has been kind of a build-up all leading to this week,” said Paddy.

“I have to say though the last few weeks there has been a lot of practice just getting myself ready.  I have never watched this event on TV but then all my friends have watched it including Ethan who is caddying for me.  He comes over here to Orlando every year just to watch the event and Ethan said he knew the course well.”

Paddy turned 14 in August exactly a week before his father celebrated his 46th birthday on August 31s but he’s already only just inches shy of his father and he is looking forward to making his ‘world stage’ debut on Saturday morning (US time).

“I’m not nervous right now but I am sure when I step onto the tee on Saturday morning I will be very nervous as I have never played golf in front on anyone other than my friends and my dad but I am also very definitely excited,” he said.

“We are playing alongside some of the greats in golf like Jack Nicklaus, Greg Norman, Nick Faldo and we are playing with Greg Norman and his son, Greg Junior on Saturday, so I am looking forward to that.”

And the advice from the father who was won three Majors along with 26 other pro victories and also competed in six Ryder Cup’s?

“The great thing about Paddy is that he is motivated to compete this week and while it is very different for a son to follow in his father’s footsteps into the same sport he has got to be respected,” said Harrington.

“When Paddy turns say 30-years of age and if he’s out playing in a corporate outing he is going to have say 10 people who will come out from the clubhouse just to see him tee-off.”

“So, he’s got to able to blast it off the tee and he needs to start at some stage so this week is the push to get him out there and get him started.’

“Paddy is now nine-months further down the road because of this event than he would be in that goal iIf we didn’t have this event as he would have done nothing golf-wise all year.”

“Paddy will be fine and he will be capable as this has been a big plus for us because at least this year he will have played some golf.  What I am trying to say is that at 14 it is a good time as at 15 or 16 years it is starting to be a bit too late.”

“Like my 10-year old is not interested in golf but then with Paddy playing this week he’s asking ‘why aren’t I playing? (smiling)”.