Dunne and Lowry finish strong as Grace claims the Nedbank

Paul Dunne and Shane Lowry finished strong on the final day of the Nedbank Golf Challenge hosted by Gary Player.

Lowry carded a final round 71 to finish in a tie for 12th and earn the Clara man just over €93,000 and moved him up to 50th place in the Race to Dubai rankings ahead of next week’s season finale in Dubai.

At the summit, it was Branden Grace who produced a stunning closing 66 to win an eighth European Tour title and delight the home fans in South Africa

The seventh Rolex Series event of the season had brought an elite field to Gary Player Country Club and they did not disappoint, with the final group of Grace, Victor Dubuisson and Scott Jamieson producing an enthralling final-day battle.
The trio shared the lead with four holes to play but a brilliant 40-foot birdie putt on the 16th moved Grace to 11 under and handed him a one-shot victory over Jamieson.

Frenchman Dubuisson was then at nine under, two shots clear of China’s Li Haotong – who produced the lowest round of the week with a 64 – and three ahead of two-time Major Championship winner Martin Kaymer.
Grace hit all 18 greens in regulation in his final round as he moved alongside Louis Oosthuizen into a tie for fourth on the list of all-time South African European Tour winners, behind only Ernie Els, Retief Goosen and Charl Schwartzel. 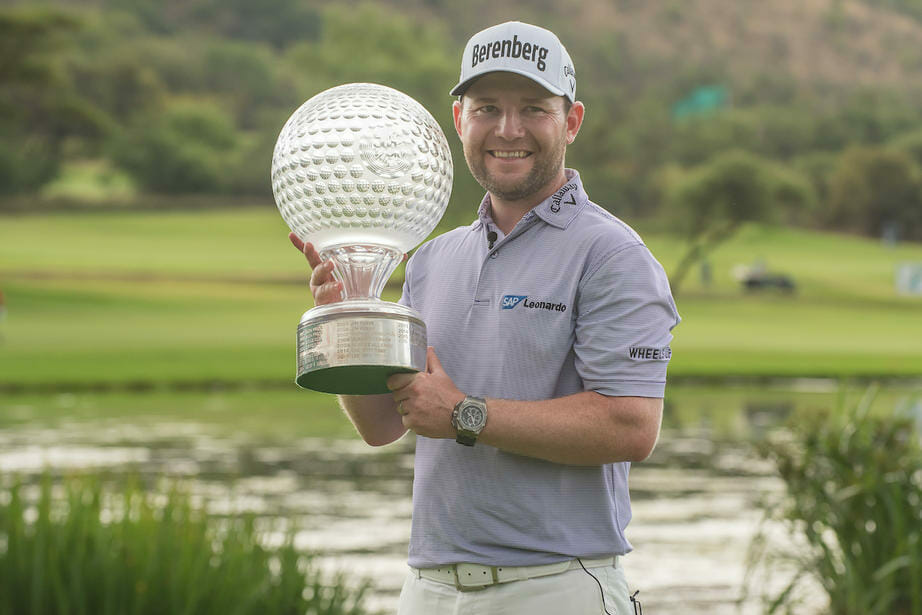 The 29 year old is the first home winner of the event since Trevor Immelman in 2007 and moves into the top ten on the Race to Dubai Rankings presented by Rolex.
“This is awesome,” he said. “This is the one event that as a South African you want to win. It’s Africa’s Major for a reason and what a special place it is.
“There’s a lot of history and a lot of great winners on the trophy and I’m very glad to be able to put my name on the trophy as well.
“It’s a very special week, we found out on Wednesday we’re having a boy.
“I had to stay patient and I had to take the chances when they came my way. I missed a couple of short ones but I think the big key was the putt on 16.”

This is the one event that as a South African you want to win. It’s Africa’s Major for a reason and what a special place it is – Branden Grace
Jamieson hit an excellent approach into his opener but missed the birdie putt, with Dubuisson getting inside him and holing from four feet to join the lead.
The Scot and Grace both made birdies on the par five second but Li was the man to watch, making a sixth gain of the day on the ninth to turn in 30.
Grace hit a brilliant approach into the fifth for another gain and all three members of the final group then put their second shots close on the sixth for birdies.

Jamieson had looked unflappable but found a bunker on the eighth, flew his shot from the sand over the green and failed to get up and down. That meant a double-bogey out of nowhere and all of a sudden Dubuisson was the man in the lead.
The top three positions had looked a closed shop but Li had other ideas, hitting a smart tee-shot on the 12th and getting up and down from a bunker on the 14th for two more birdies and he was just two off the lead at seven under.
He would set the target at that mark and with the leading trio all making birdies on the par five tenth, they once again edged away from the field.
Jamieson made a brilliant recovery from a fairway bunker on the 14th to get up and down from 206 yards and with Grace also birdieing after hitting the fringe in two, there was a three-way tie at the top.

Grace had missed a good birdie opportunity on the 13th and he did it again on the 15th, with Dubuisson dropping out of the lead with a bogey.
Jamieson made the par of the week on the next as he hit a shank off the tee but bounced out of the hospitality units and made an incredible up and down before Grace rolled in the vital putt.
Kaymer had made bogeys on the second and fifth but hit an excellent tee-shot into the seventh, holed a bunker shot on the eighth and made the most of the par five ninth and tenth before bogeying the last.
Darren Fichardt and Lee Westwood finished at five under, a shot clear of Oosthuizen and Matthew Fiitzpatrick.
Rankings leader Tommy Fleetwood was a shot behind and will head to next week’s DP World Tour Championship, Dubai knowing that only Justin Rose and Sergio Garcia can deny him being crowned the Race Dubai champion.

Padraig Harrington brought the curtain down on his 2017 European Tour season as he carded a final round of 75 to finish in a tie for 42nd. Harrington will now head stateside and compete on the PGA Tour before closing his year out in mid December.