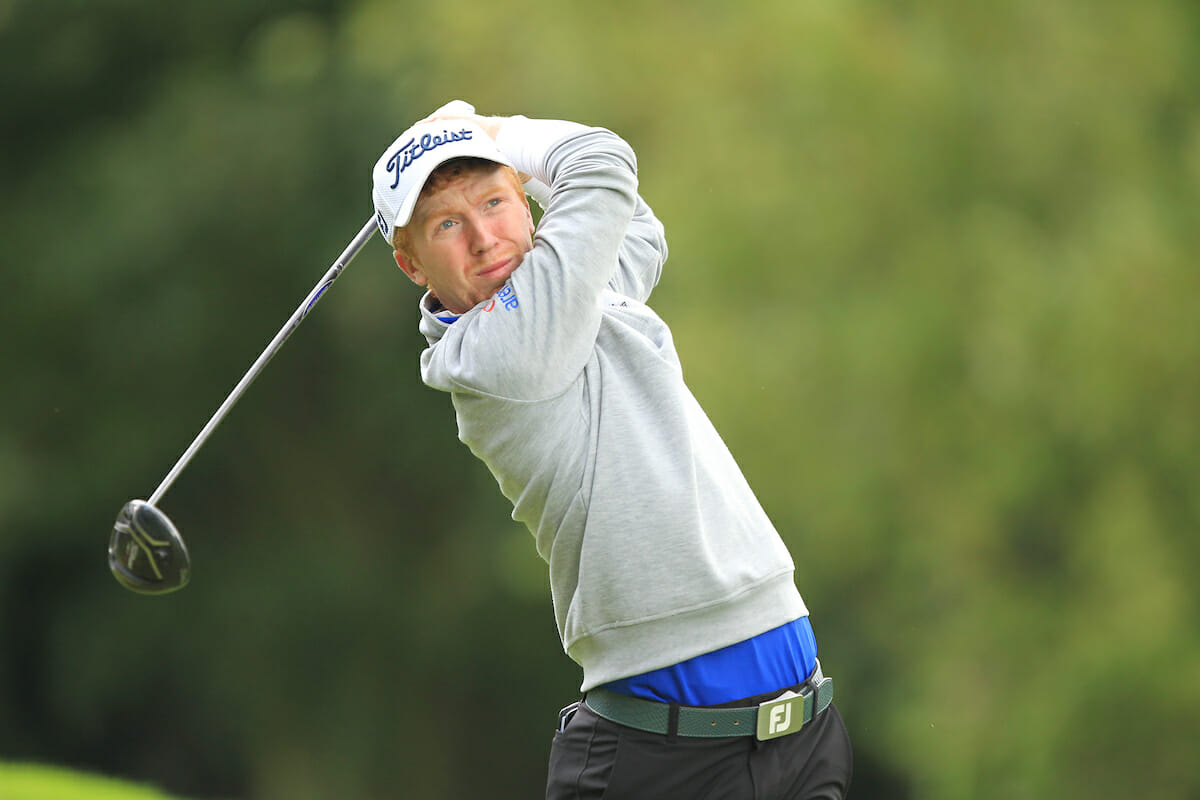 Gavin Moynihan eagled his last hole this morning to jump into a tie for 8th after round three of the Hainan Open in China.

Ireland’s sole competitor in the field fired a 69 to sit on ten under par, seven shots behind runaway leader Erik Van Rooyen.
Moynihan was in the groove from the off, birdying the par-5 2nd before picking up a birdie three at the 3rd. He added another birdie at the 6th to be out in a bogey-free 33 strokes and looking menacing.

Yet whatever momentum he’d built making the turn soon evaporated with a pair of bogeys at 10 and 12 before a par at the par-5 13th did little to ease his frustrations. A birdie two on 14 was just the tonic needed before another bogey on 16 threatened to remove the gloss from an otherwise wonderful performance.
But then Moynihan burst into life.
An eagle three on 18 has dramatically changed the complexion of his tournament after 54 holes and Gavin, currently 30th in the Road to Oman rankings, will be hoping for more fireworks ala 18 tomorrow to vastly improve his standing as the season draws to a close.
Erik van Rooyen doesn’t look like one for catching however and will take a two-shot lead into the final round after carding a 67 during day three in China.

The South African has been in imperious form all week, and after scores of 67 and 65 van Rooyen claimed the 36-hole lead in Sanya.
The 27 year old continued his impressive scoring today by bagging five birdies and holing out for an eagle from 90 yards at the par four 12th.
Despite temporarily losing his composure on the par four 15th – where an errant drive led to a double-bogey – van Rooyen signed for his third sub-70 score of the tournament and a 17 under par total.

His nearest challenger is Finland’s Tapio Pulkkanen who is two shots back. Van Rooyen held a one-shot lead over Pulkkanen going into the final round of last month’s Kazakhstan Open – which Pulkkanen went on to win in a play-off.
The pair will lock horns once again tomorrow and van Rooyen is excited for their rematch.
“I am looking forward to tomorrow and it should be a great battle,” he said. “Tapio is a very fun guy to play with. Congratulations to him for winning Kazakhstan – he is a very high calibre player and it was a great victory for him.
“I made some really nice putts today – I made a really good birdie at 11 then went on a great run. I eagled 12 and then made another birdie at 13 too, and I guess when you are playing well things fall into place for you.

“The wind started picking up when I got to the 15th and I was hitting into it so I thought that I should take a driver. In hindsight I should have taken a three wood off of the tee but that was the only bad swing I made today.
“The game plan that I have had has worked pretty well so far. I am going to have to look at the weather forecast for tomorrow and that might change a few things depending on whether it is wet and windy.
“I am hitting a tonne of fairways and am also putting really well so if I continue to do that I should be good tomorrow.”

Also impressing during the third round in China was 17 year old amateur Lin Yuxin. The home favourite made six birdies during a bogey-free 66 to move into the top five in Sanya and become the highest-ranked Chinese player in the field