"Once in front the focus was to keep pushing" Paul Dunne 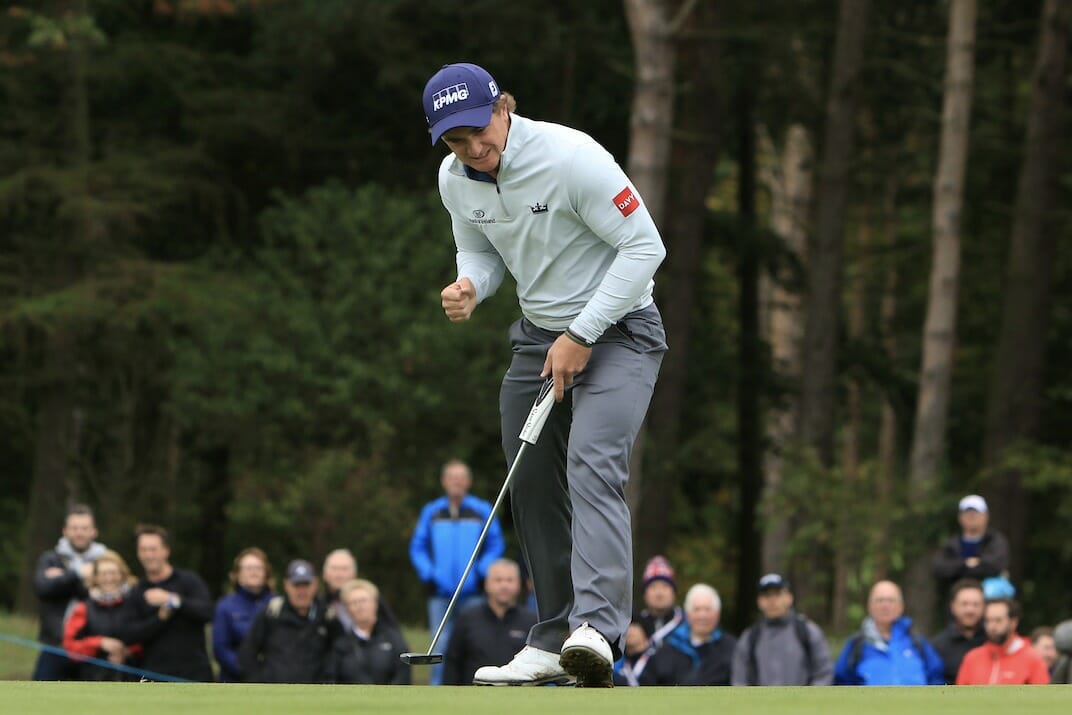 New British Masters champion Paul Dunne admitted he has been far too hard on himself in the goal to become a winner on the European Tour.

Dunne was not gifted the title nor did he fall into victory. No, the 24-year old softly-spoken Greystones professional won convincingly by three shots after carding a Sunday nine-under par 61 that unfortunately won’t count in the record books given the ‘preferred rule’ in effect.

After his round Dunne spoke of fighting off those inner demons, the like that surfaced earlier this year in losing a play-off for the Hassan 11 Trophy in Morocco.

“I’ve had a tough time being too hard on myself sometimes but then I figured out that that gives you strength, as well,”he said. “I’ve improved a lot mentally over the last year in these kind of situations. I found myself on a lot of Sundays last year feeling like I needed to press forward trying to chase my card and I was struggling with it.”

“My Sunday performances weren’t that strong. This year, it’s something I’ve definitely improved on. I feel like I’ve got a bit tougher mentally. I think I took that into today. I went out and really tried to win the tournament, rather than have someone hand it to me. That was the focus.
“Once I was in front, the focus was just to keep pushing, make no bogeys and see how many birdies I could make, so I am absolutely thrilled to win it this way.”

Dunne is no stranger to hard work and was one of the first players onto the range at Close House on Monday straight after a visit to the Tour physio unit working on his strength and conditioning.

“I do think I work hard, but I think everybody works hard. There’re very few players who don’t put the work into every element of their game, whether it be fitness, golf, diet, travelling plan, scheduling, all that kind of thing.  Everyone at this stage seems to have good teams behind them and puts the work in, and when push comes to shove on Sunday, you just have to get the job done.”

“That’s what I’ve been telling myself over the last few months.  You need to put everything else aside and try to get the job done on Sunday, and that’s when all the hard work pays off.”

“But you can’t think about it that way, because if you expect the hard work to pay off, then you won’t have that drive. So, I have kept moving and kept pushing forward.”

His British Masters win has seen Dunne earn a two-year Tour exemption to the end of the 2019 season and jumps him up in the World Rankings from 192nd to 88th opening up the WGC door for next season. That ranking will be higher than Harrington and McDowell and close on the tail of Lowry.

“I probably will buy a boat,” he said laughing.  I don’t know yet. I’ll have to look. The money is great. It means I don’t have to worry about getting a job where I have to sit behind a desk. But after all this, you know, I really love playing golf, and I’ve been grateful.”

“When I turned pro, I never had to worry about money. I had great sponsors from the outset that really helped me in that on that front, and took the worry out of my head completely. So, I might buy something nice, but I don’t know what it is. I probably would rather buy something nice for my family or something.”

Winning any European Tour event is a huge task but putting a top field like the one assembled for this years British Masters leaves no doubt as to Dunne’s potential.

“Any time I can beat a field of this quality it’s great you know. I don’t know how many, but I know there’s a lot of players in the world Top-50 here. That gives me a sense of satisfaction to know that I can beat players of that calibre.”

“It is a sense of relief to prove it to myself that I can get it done,” he added.

“The fact that Rory came second, Shane came seventh, that’s just great for Irish golf. I think we only had four Irish in the field this week and had three finish in the top seven. So, it has been a great week for Irish golf”

The best of Dunne’s final round 61