Dunne dazzles on moving day at the KLM Open 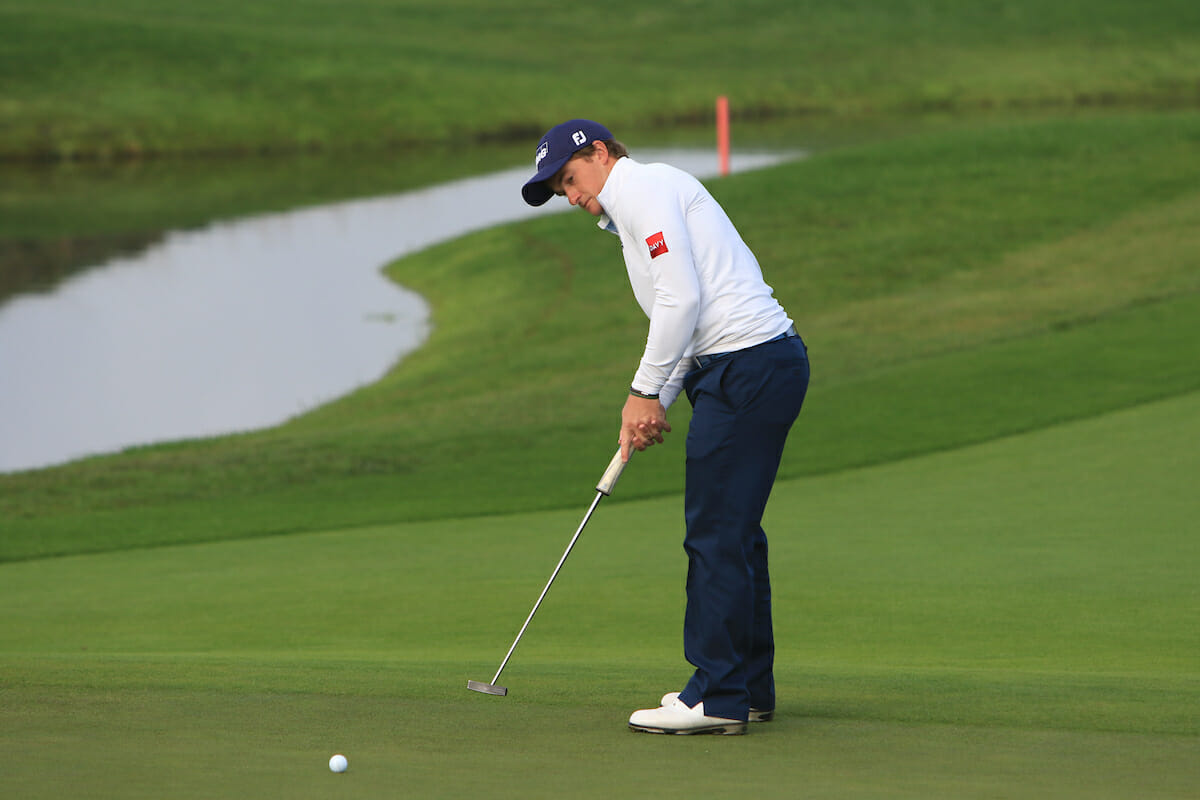 Paul Dunne got his skates on for moving day at the KLM Open, firing a third round 66 to fly 41 places up the leaderboard into a tie for 16th.

Starting the day at level par, Dunne’s day got off to a stuttering start with a double bogey 6 on the 12th, his third, but the blip seemed to galvanise the Greystones’ star.
Back-to-back birdies followed immediately to cancel out the double and Dunne closed his front nine with two more to get the wheels in motion on a Saturday move, out in 34. A lull of three pars to open his back half momentarily stalled momentum before a birdie, birdie, eagle salvo exploded the Irishman into life.
He couldn’t add to the haul over his closing three, but still goes into Sunday with another top-10 finish for 2017 well within his reach.
The day wasn’t so lively for Padraig Harrington. Alongside Dunne at level par starting out, the Dubliner’s good work on his two under par front nine was soon undone with a deflating triple bogey 7 at the 2nd, his 11th. Ever the grinder, Harrington kept smiling and finished with two more birdies at his 15th and 17th to get himself into the red for the tournament, currently in a tie for 54th.

It was Kiradech Aphibarnrat who holed a 25 foot birdie effort on the 18th to snatch a one shot lead going into the final round.
The 28 year old from Thailand led for much of the third round, but spurned several good birdie chances on the back nine at The Dutch and seemed to have paid the price for his profligacy when he was caught by France’s Romain Wattel.
However, the first birdie of his inward nine at the last gave Aphibarnrat a round of 66 and a 14 under par total – one ahead of Wattel.

A shot behind halfway leaders Joakim Lagergren and Joël Stalter once the second round was completed on Saturday morning, Aphibarnrat holed a 15 footer for birdie on the fourth to keep touch with the leaders.
French rookie Stalter, who had held a one shot lead overnight before Sweden’s Lagergren completed a flawless second round to catch him, initially went ahead when he rolled in a 12 footer at the second.
Lagergren bogeyed the second but then birdied the fifth and eagled the long sixth, with Stalter keeping tabs with a gain of his own on the sixth. However, Thailand’s Aphibarnrat picked up shots at the sixth, seventh and eighth, and an outward 31 left him two ahead of the chasing pack.

Wattel had already registered five birdies in six holes around the turn when he almost holed his tee shot to the 14th – a day after Mikko Ilonen recorded the European Tour’s 1,000th ace on the same hole – and the subsequent birdie put him within one of Aphibarnrat, with Lagergren heading in the opposite direction after missing a short par putt on the 11th. Aphibarnrat missed good chances to extend his lead on the 11th and 12th, and was caught when Wattel knocked in an eight footer for birdie at the 16th.

The pair remained locked together until Aphibarnrat’s late strike, with birdies on the 15th and 17th leaving Stalter third on 12 under after a round of 69. England’s Lee Westwood also birdied the last for a 67 to lie on 11 under, alongside Germany’s Sebastian Heisele and Lagergren, who signed for a one under 70.
Wattel has a chance to end his wait for a first European Tour title after a flawless 64, having twice been a European Tour runner-up and with 25 top-ten finishes to his name.
After shooting his lowest round of the season, Wattel – without a top-20 finish this campaign – said: “I’m very delighted, I played very good today.  “I just tried to play my own game and I made some good putts.

“The game, it’s just up and down. I’ve been doing my best this year but it hasn’t been enough. I’ve been working with my coach and changed many things, but when you work a lot you don’t always get what you expect.”