An A-Z of Augusta National & The Masters

It all starts today. The Masters is finally here and we’ve got an A-Z of Augusta for you to get you into the spirit.

The name given to Augusta National’s 11th 12th and 13th holes by writer Herbert Warren Wind, inspired by the extraordinary manner in which Arnold Palmer played those holes to claim his first Masters title in 1958. Palmer played two balls on the Par 3 12th because of an uncertain ruling regarding an embedded ball. The par 3 he achieved with his second ball was the score that ultimately counted and despite that uncertainty he also eagled the Par 5 13th to secure his first major victory and propel himself to superstardom.

In 1930, at the age of 28, Bobby Jones had achieved what was known as the ‘impregnable quadrilateral of golf’ – the British and US Amateur Championships and the British and US Opens. Jones was revered and honoured by two New York ticker tape parades. He retired from competition and had a dream of building a course in the Southern United States that would reflect his ideas about the game. He then met Clifford Roberts and that dream became reality with Augusta National.

Co-founder with Bobby Jones of Augusta National in the Spring of 1931. Roberts was an investment banker on Wall Street who Jones trusted with his grand idea. He picked the right man – Roberts exuded confidence and competence and was a relentless perfectionist. He was a man who commanded respect rather than affection. Peter Dobereiner wrote that Robert’s “simple creed” was “everything about Augusta National and the Masters has to be the best and if it was not then it would have to be improved every year until it was”. Clifford Roberts, who was suffering from ill health, died at the age of 83 from a self-inflicted gunshot wound on the banks of Ike’s Pond at Augusta National. He is buried in an unmarked grave.

The future American president first visited Augusta National in April 1948 and he and his wife, Mamie, were instantly smitten with the club. Six months

later he became a member of the private club. Eisenhower made 45 trips to Augusta – five before he became president, 29 while president and 11 after

his last term – and many were for a week or longer. He never attended the Masters, but he frequently timed his trips to come immediately after the

tournament when the course was in its prime.

Augusta National was once home to ‘Fruitland Nurseries’ that dates back to 1853 and was one of the most successful horticultural sites of its time in the Southern United States. Located on Washington Avenue, approximately 3 miles northwest of downtown Augusta, Fruitland planted millions of peach trees in the 1800’s and early 1900’s and this eventually led to Georgia becoming known as the ‘Peach State’.

Probably the most famous garment in world sport. Originally worn by members so fans could easily identify them if they needed to ask questions at the tournament. Soon, the Green Jacket became the symbol of membership of one of the most exclusive clubs in the world. The Green Jacket was first presented to a winner when Sam Snead claimed his first Masters title in 1949.

Won the first Masters Invitational Tournament in 1934 and followed up with a second victory in 1936.

The Masters is unique in that it is the only tournament in the world that is run by a club and not by a national golf organisation. Two-dozen committees headed by club members assume responsibility for everything from pin placement to the price of pimento cheese sandwiches in the concession stands. It is also an invitation only event based on strict criteria.

Jordan Spieth won the 2015 Masters with a score of 270 (-18) to tie the 72-hole record set by Tiger Woods in 1997 and he became the second youngest player to win the Masters, behind Woods. 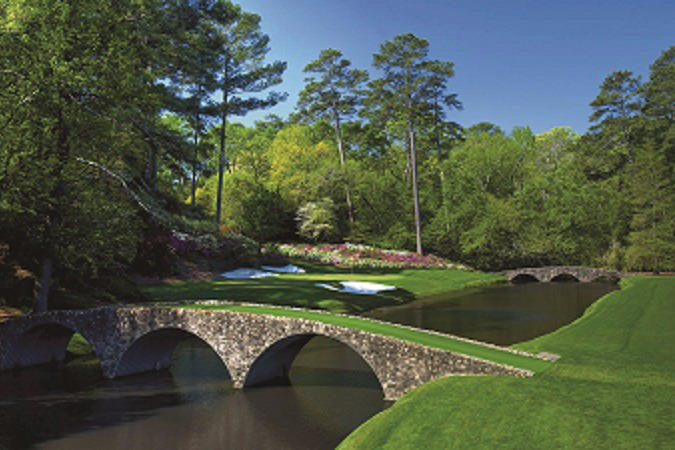 No need to worry this year as it was cancelled but no player has ever won the Par 3 competition on the Wednesday of the Masters and gone on to win the tournament. Many players who find themselves in with a chaance of winning this fun competition will purposely find water with their tee shots on the 9th to avoid putting the kibosh on their chances of donning the Green Jacket.

The 330-yard long Magnolia Lane is the entrance to Augusta National and is famous for its canopy of magnolia trees that date back to the 1850’s. The 61 trees on each side create a tunnel effect that is particularly striking when they are in full bloom. Magnolia Lane ends in a roundabout (Founders Circle) in front of the clubhouse.

Holds the record with six US Masters victories. Jack’s first win at Augusta was as a 23-year-old in 1963 when he finished a single shot ahead of Tony Lema. His sixth Green Jacket was probably his sweetest – the Golden Bear rolled back the years and in 1986 became the oldest player to win the Green Jacket at the age of 46. The 23-year span between his first and last US Masters victories is also a record, as is the 24-year span between his first and last Major.

Cliff Roberts and Bobby Jones wanted to simplify the scoring at the Masters to make it easier for patrons to keep track of what was happening on the course. In collaboration with the legendary Frank Chirkinian of CBS, they devised the over/under scoring system relating to par rather than total strokes. It was considered radical at the time but has become the standard scoring system for golf all around the world.

The official term for the 40,000 or so people who attend the Masters each day is “Patrons”. They must never be called anything as crude as fans, customers or ‘the crowd’. Patrons must not run, lie down on the grass, walk in their bare feet or wear their baseball cap on backwards – not even Rickie Fowler. Oh, and don’t even think about taking a selfie.

Queues are rare at Augusta National. Everything runs like clockwork and patrons don’t have to wait long to pay for food at the concession stands or at the merchandising areas.

This is the water fronting the Par 3 12th green at Augusta National – it also flows behind the 11th green and in front of the 13th tee. The famous creek is named after an Irishman, John Rae, who built a grist mill on the banks of the creek in 1765.

Trailing by three shots with four holes to play, Gene Sarazen fired in an albatross with a 235-yard second shot on the Par 5 15th hole. The ‘shot heard round the world’ propelled Sarazen to his first Masters title in 1935.

The face value of a season ticket to the US Masters at Augusta is now $325 but sells for thousands of dollars on secondary markets. The waiting list for tickets closed in 1978 and opened again briefly in 2000, before closing again. A beer and a sandwich at the Masters will set you back just $6 while a coffee costs just a dollar.

Augusta National is a very hilly course with the most severe undulations on the 1st, 2nd, 9th and 10th and 18th holes. You will be well acquainted with the course from watching the Masters on television but there is nothing quite like seeing it for yourself.

Augusta National Golf Club has one of the most impressive private wine cellars in the world, buying the best French, Italian, American and Australian wines on futures. It has a stock of 14,000 bottles with the oldest vintage 1907.

In April 1997, at 21 years of age, Tiger Woods won the first of his four Green Jackets in sensational fashion, finishing on 18 under par and blowing away a quality field by twelve shots in the process. Woods had shot 40 on the front nine of his opening round that year. He became the youngest ever winner of the US Masters, recording the lowest ever score of 270 (matched by Jordan Spieth in 2015) and the largest ever margin of victory.

X – Xclusive (forgive me – this was a tough one)

You cannot apply to become a member of Augusta National Golf Club. You have to be invited to do so. Its membership numbers approximately 300 and this group includes some of the wealthiest, most powerful businessmen – and since 2012, women – in the world. Two of its more famous members are Bill Gates and Condoleezza Rice. There have been just three Irish members of Augusta National– legendary amateur Joe Carr, Ian Webb from Royal County Down and John Carr, a Dublin based oil company executive and son of the late Joe Carr.

You have simply got to put a visit to Augusta National on your bucket list. Nothing can quite prepare you for its beauty, its colour, its sounds and its mystique. It’s one of the few places in the world that far exceeds expectations.

Zoeller is the last player in the modern era to win the Masters at his first attempt – In 1979,  Zoeller survived a sudden death play-off – the first in Masters history – to overcome Ed Sneed and Tom Watson – with a birdie on the 11th, the second play-off hole.