Woods inspired by Federer ahead of Dubai Desert Classic

As Tiger Woods spoke to the press before he prepared to tee it up at the Omega Dubai Desert Classic this week the 14 time Major champion insisted winning is still very much at the forefront of his mind.

After a long lay off and missing the cut last week there is a lot of anticipation but little expectation surrounding Woods’ return to the European Tour, but the American insists he would not be in Dubai if he did not feel he could win.
“If I’m teeing it up, that’s the goal,” he said. “The goal is to win it.
“Over the course of my career, I have been less successful at winning golf tournaments than winning tournaments but the goal is to win and that doesn’t change.
“Whether I’m injured, coming off an injury or I’m playing well or I’m playing poorly, if I’m in the event, it’s to win the event.

“I just like to put myself in contention as many times as I possibly can to get those wins and this is a good week to start off doing that.”
Whether I’m injured, coming off an injury or I’m playing well or I’m playing poorly, if I’m in the event, it’s to win the event” 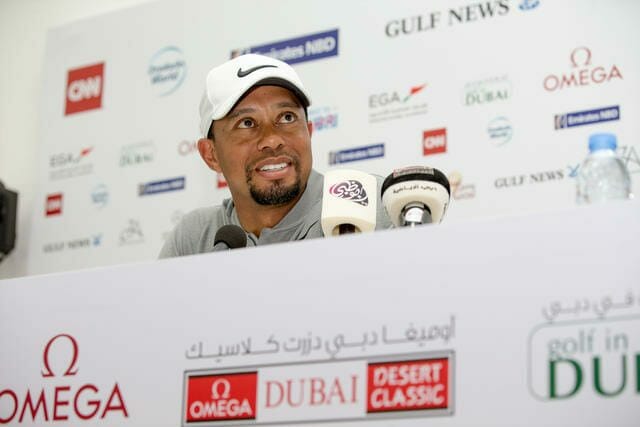 Woods was an interested spectator last weekend as his friend Roger Federer claimed his 18th Grand Slam title on Sunday at the Australian Open, beating Rafael Nadal in the final in his first tournament following a six-month injury layoff.

“What Rog has done is he’s been dominant for so long,” Woods said “To compete against (Novak Djokovic), to compete against Rafa, and now Andy (Murray) ,he’s had a litany of guys who have won slams but no one wins slams at his age.
“For him to come back, after having to take that much time off, and for him to get the timing, that’s the hardest part.”

As Woods targets to claim a 15th Major at Augusta this April he admits, much like Federer, he has had to alter his game due to injury and age.

“As you get older, you change your game and you do things slightly differently and he did that,” he said.
“I’m not going to be hitting balls like some of these guys, 340 out there. I watched Dustin (Johnson) carry a ball last week when it was cold, wet and damp and he carried it 335.

“Jason (Day) and I just looked at each other going, “We don’t have that”.

“So you do it differently. If you look at the list of guys who have shot below 60, you realise Jim Furyk’s on there twice. He averages 270 off the tee, shoots two rounds under 60. So it can be done different ways.

“The simplest thing is I just play away from pain. That’s it. Whether my swing looks classical, rhythmical or it may look unorthodox, I don’t care. As long as I don’t feel that nerve pain.”

After claiming two wins here in 2006 and 2008, Woods knows what it takes to conquer Emirates Golf Club and he is expecting a tough test should the expected high winds arrive.

“But if we get the winds that we’re supposed to get then these greens are going to get quick, hard and fast and it’s going to be imperative to hit the ball in the fairway because you just can’t spin the ball out of this rough.”