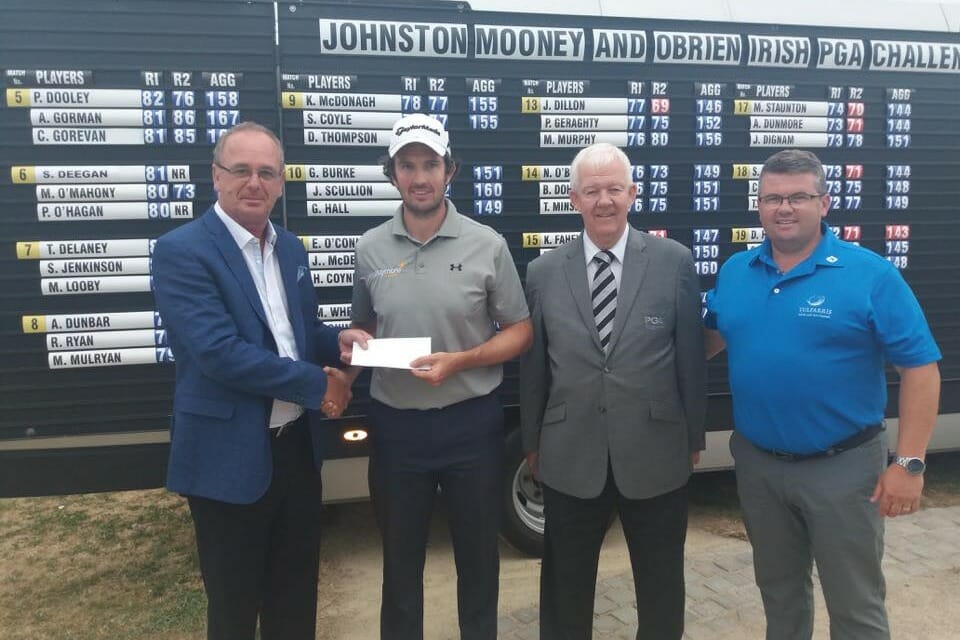 Richard Kilpatrick hung on to win the PGA Challenge at Tulfarris Hotel and Golf Resort on Tuesday.
Joint overnight leader alongside Tim Rice (Limerick), the Banbridge Golf Club professional, carded a second round one over par 73 to win the Johnston, Mooney and O’Brien sponsored event by three shots.
“The pins were tucked away today and it was a wee bit windier so it was difficult to be overly aggressive,” said Richard who played in the final three-ball alongside Rice and David Ryan (Cahir Park).
“As a group, I think we only had two birdies between us. We all played reasonably well on the front nine but didn’t manage to hole anything and then on the back nine, things got a bit edgy.
“There’s no scoreboards around so you can’t see what anyone else is doing. It was nice to see that a one under was the next best score when I came in.”
Richard opened his bid for the title with a five-under-par 67 on Tuesday helped by a strong driving performance that set up two eagle chances which he gratefully accepted.
“I probably hit is just as well today but it was more a case of hitting it to 30 or 40 feet and two putting rather than firing at flags,” he added.
David Higgins (Waterville Links) grabbed second with Mark Staunton (Delgany), Adam Dunmore (Bundoran) and Simon Thornton (Tulfarris Golf Resort) finishing in joint third on level par.
Rice struggled on day two signing for a six over par 78 that saw him slip down the leaderboard and into a tie for sixth.