All roads lead to Moyvalley for the 107th Irish PGA 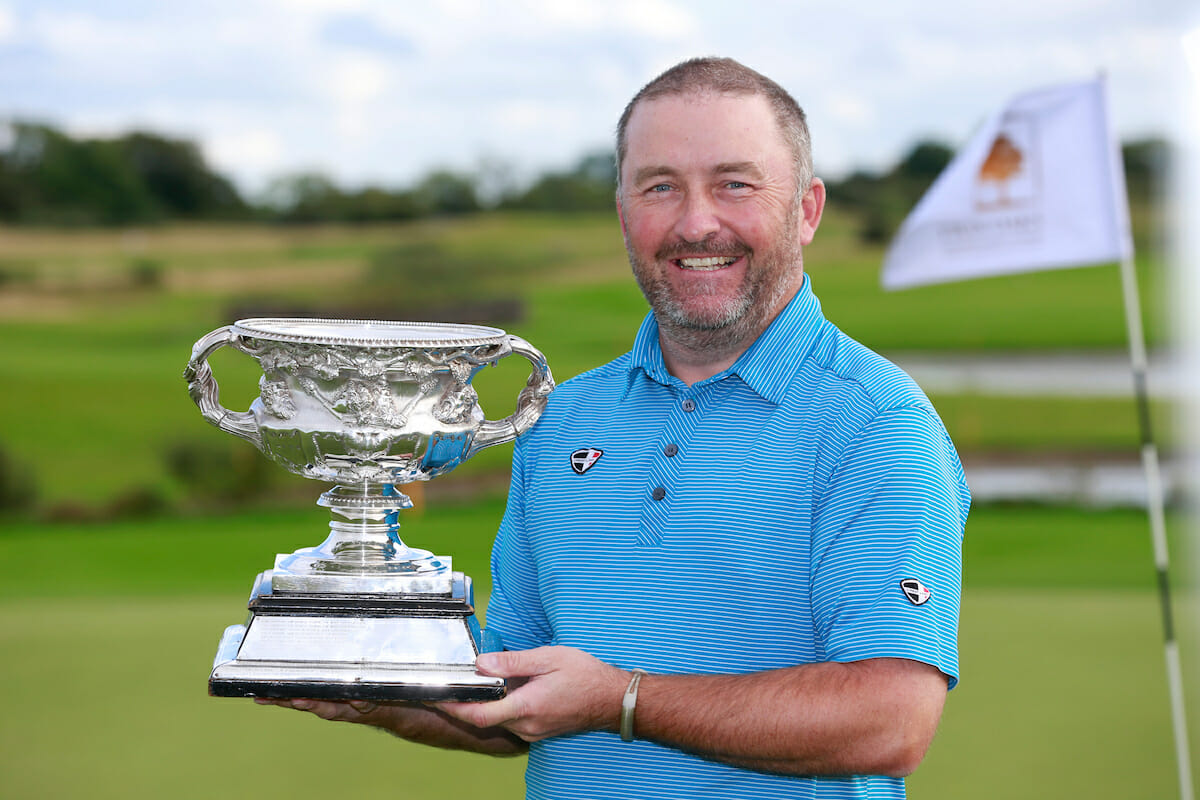 The Irish PGA Championships moving to a prime summer date in June will mean more early season practice for the contenders but current Champion Damien McGrane will be waiting to take them all on.

With the news that Moyvalley was to once again play host to the Irish PGA Championships and that it was moving to a prime date in June there was certainly one smiling face, Damien McGrane!
McGrane is the current champion and while his reign may be one of the shortest in the history of the event (he won in September so will have held onto the trophy for only 9 months), he was never going to be satisfied with just one Irish PGA Championship success to his name.

Damien’s desire to travel the globe may have waned, but he remains as competitive as ever and he has no intention of giving up his title without a fight. “The hardest thing by far for me was just getting that first one,” said the 46-year-old. “Now that I have won it, hopefully that’s opened the floodgates for me. I would love to press on, to defend the title and become a multiple winner of the Irish Championship.”
“I’m still motivated and I set myself high standards. I am very competitive as a person so I want to play well and when I go out to play I expect to do well. I might have less interest in packing my bags and going overseas but when I do play golf I want to shoot the lowest score I can and have the best day I possibly can. With a bit of luck that motivation will never leave me, I will always want to succeed.”
McGrane made his long awaited breakthrough at the Moyvalley Hotel & Golf Resort (Co Kildare) last September when he edged out Simon Thornton by a shot after a tense back nine battle.
The Kells man holed a number of crucial putts over the closing holes to stay ahead of Thornton and he believes that having a razor-sharp short game will be the key to success when the tournament returns to the Twin Oaks Championship course in June.
“Last year the weather was poor. The golf course was in good condition but the weather didn’t lead to low scoring,” he said. “Moyvalley is not overly difficult off the tee so ultimately it will boil down to something of a short game contest. Anyone looking to do well will have to perform around the greens because there is a bit of flexibility off the tee.”
“Moving the tournament to a better date (June 22-25) will hopefully help with the weather but a lot of the players probably won’t just be as match fit because it is a bit earlier in the season. Mind you, the Irish PGA Championship remains the highlight of the season and I can see most of the guys going out of their way to get some golf in and get some practice under their belts before they arrive at Moyvalley.”

“I’m looking forward to returning to Moyvalley and with a bit of good form, I believe I can run it close again.”
A winner of the Volvo China Open in 2008, Damien dominated the 2016 PGA in Ireland season. He topped the Order of Merit, winning 15 events in all, with 10 of those wins coming in Order of Merit counting tournaments.
He actually started the season quite slowly and didn’t kick into top gear until July but he still ended 2016 with an impressive scoring average of 70.20, finished inside the top 10 on 46 occasions and made 201 birdies along the way.
He has remained close to home during the off-season but never put the clubs into hibernation.
“At this stage of my life I take it easy now but I try to play regularly,” he added. “I play at least twice every week, often at home in Headfort and with my friends every Thursday. That’s how I try to keep myself sharp.”

“I like to play with my amateur friends which is something you simply can’t do when you are away on tour. That’s one of the things that I get to enjoy now. This winter I have also tried to get around and play some of the courses off the beaten track, courses that are not on the PGA tournament schedule, courses that I would not normally play. It helps keep me in touch with the game as well.”
Defending his Irish PGA Championship title at Moyvalley forms the centre piece of a competition schedule that will see Damien play events on the Irish region alongside the BMW PGA Championship, the Irish Open and the Challenge Tour.
“I have been away so much over the course of my career that I have very little interest in travelling,” he added. “I am at a different stage in my career now and I enjoy playing the Irish Region. I finished in the top 10 at the Challenge Tour event at Galgorm Castle last year. Whenever I get a chance to demonstrate that competitive edge I will load up the car and go down the road.”
Edged out by a single shot last year, Simon Thornton is hoping to get back into the mix again in 2017. However, he admits he’s not exactly sure what state his game will be in as he continues his recovery from foot surgery. 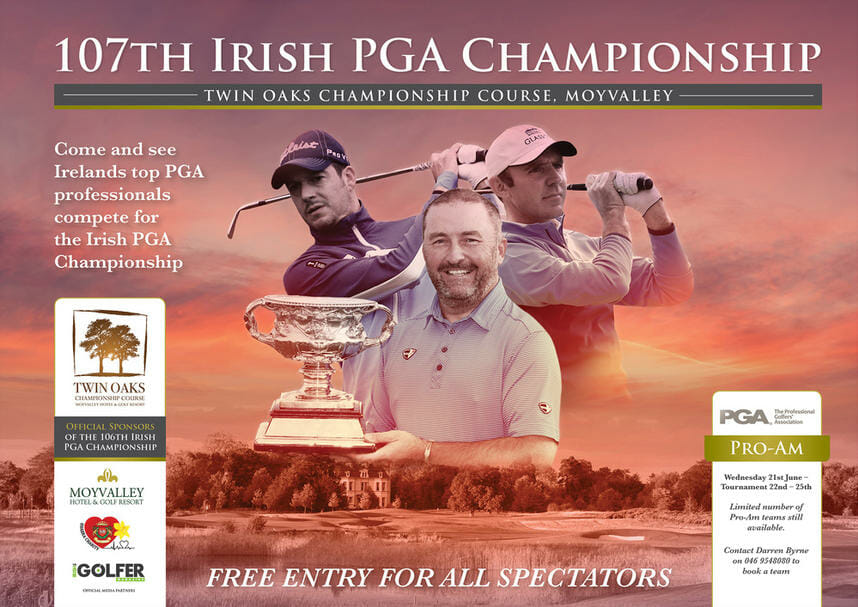 The 40-year-old played through the pain barrier last season, struggling to walk 18 holes as he battled severe pain. “I had a thing called Morton’s neuroma. It feels like you have stones on the balls of your feet and eventually the nerves get trapped and it’s very painful,” said Thornton, winner of the Irish PGA Championship in 2011. “After trying other non-surgical methods I eventually had an operation in March. Everything went well, I am recovering but it is a slow process. I’m not sure what state my game will be in come June.”
Colm Moriarty, who finished alone in third at Moyvalley on seven under par has also confirmed his intention to play in the Irish Championship. “The course is designed as an inland links and hopefully during the summer it will play a bit truer to how it is meant to play.”
“There are plenty of obstacles off the tee, plenty of fairway bunkers so you have to drive the ball well. I remember during the Challenge Tour event there a number of years ago, the rough was long and it was quite wispy. If the rough is up and we play off the back tees you will really have to drive the ball well.”
The Irish PGA Championship returns to the Twin Oaks Championship Course at Moyvalley Hotel & Golf Resort in Co Kildare from Thursday 22 June – Sunday 25 June.

The tournament features a prize fund of €30,000 and will be preceded on Wednesday June 21 by a Pro-Am which is a key fundraising event for the Shabra Charity Foundation.
For further information on booking a team at the “107th PGA Championship Pro Am Tournament” please contact Darren Byrne, Moyvalley
Hotel & Golf Resort,
golf@moyvalley.com, or telephone 046 9548080.