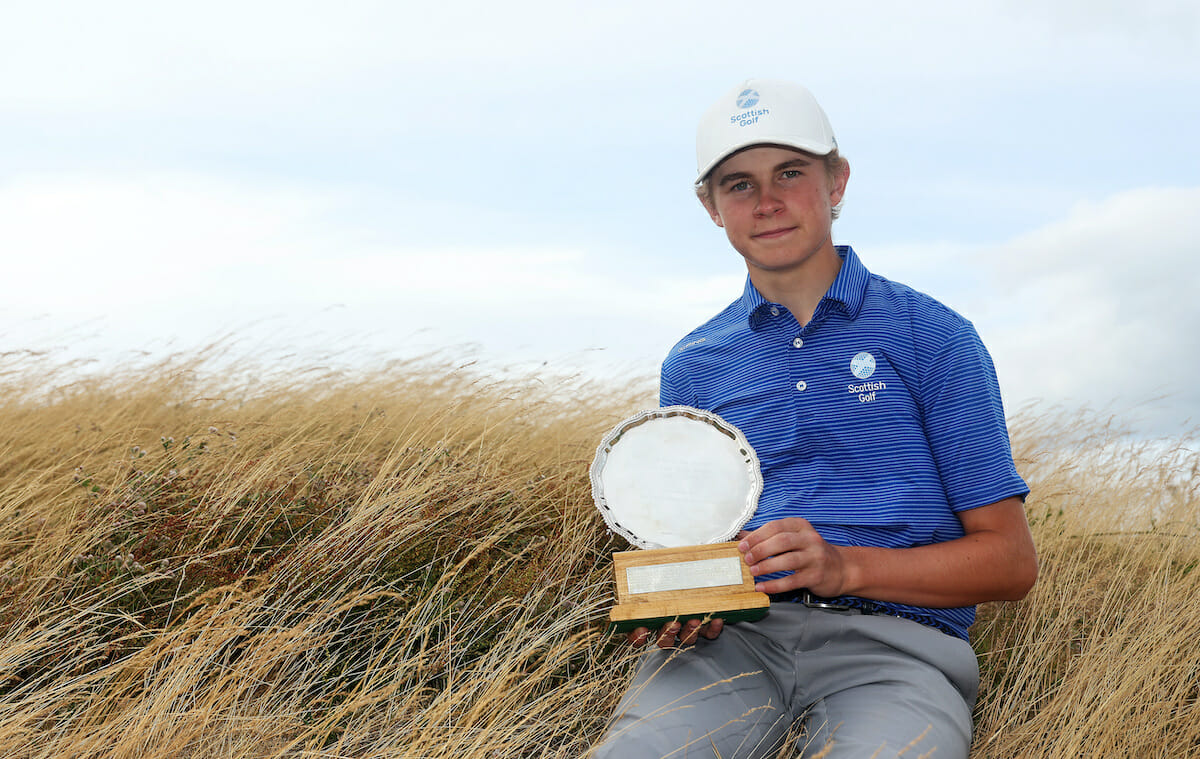 Connor Graham of Scotland pictured, after winning the The Junior Open Championship at Monifieth on July 13, 2022 in Monifieth, Scotland. (Photo by Matthew Lewis/R&A/R&A via Getty Images)

Fionn Dobbin rounded off an impressive week at the R&A Junior Open with a share of fifth place in Monifieth as Connor Graham romped to a five-shot victory on the final day.

Dobbin of Malone shot a final round of one-under 71 to finish the championship on one-under alongside Norwegian Oscar Bach.

Oughterard’s Kate Dillon shot a final round 80 to take 57th on twenty-over.

Dobbin has certainly enjoyed the front nine this week and he started well again in his final round as birdies on four and six brought him to two-under for the championship.

The Irishman opened his back nine with three dropped shots in four holes but finished with a flourish with birdies on the fifteenth and eighteenth to finish in red figures.

But there was no stopping Graham who thrilled the home fans as he finished on thirteen-under with a bogey-free final round of 67.

With 1999 Open Champion Paul Lawrie watching the action, 15-year-old Graham was coolness personified to defeat heavily fancied Thai player Ratchanon Chantananuwat by five shots. Eric Zhao from Canada was third on four-under in the 54-hole championship, with Riura Matsui from Japan in fourth spot on two-under.“It’s a great feeling to come out on top in such a big event,” said Graham. “Ratchanon’s obviously a very good player and it feels good to perform well against him and other good players.”

Graham overcame 109 players aged between 12-16 from 64 nations around the globe to notch his first victory of 2022 after four wins last year. He added, “This win ranks very high just because of the way I performed here. I didn’t drop a shot today under the pressure so I’m really pleased about that.”

The Paul Lawrie Foundation Junior Jug was one of Graham’s four wins last year and he is part of Lawrie’s Foundation to help young Scottish golfers improve their talents.Graham said, “It was pretty special to see Paul come out and watch me play. I’m one of his ambassadors and he’s helped me a lot in getting my golf to the next level.”

“The front nine was crucial because I could have easily dropped a shot or two to let him in, but I kept my foot down and holed that pitch shot at seven to keep the momentum going,” Graham said. “I was glad to see that go in because it gave me a four-shot lead and I needed that because the back nine was playing hard into the wind.”