Rafferty on the hunt for more success in 2019

It’s a sign of how far Caolan Rafferty has come over the past three years that he is now the highest ranked Irishman on the World Amateur Golf rankings having broken into the top 50 for the first time in recent weeks.

As 2018 draws to a close Rafferty, who turned 26 on December 22, sits at No.49 on the WAG Rankings and is looking forward to 2019 knowing it could be even better than the previous 12 months.

This time last year, the Dundalk Golf Club player set himself three objectives. They were to win one of Ireland’s six major amateur golf championships, win a senior club pennant with Dundalk, and make the Irish team for the Eisenhower Trophy.

He achieved two out of the three as he beat Rowan Lester in the South of Ireland final at Lahinch in July and led Dundalk to victory over Enniscorthy in the Leinster final of the Barton Shield in June. He agrees it was a good year.

“Two out of three wasn’t bad and even the Eisenhower was close in that I was probably the fourth man of a three man team.
“I think at one stage I had five, maybe six trophies, in the house, all at the one time. It was a really good spell from say September of 2017 to now. I couldn’t really complain. I won in Colombia in September 2017 and that was my first big win. That boosted my confidence. Getting the South took a weight off my shoulders and hopefully I can add to it now because that’s the next objective.”

His other major objectives for 2019 are to make the Britain and Ireland Walker Cup team in September and he also wants to also secure a place at the US Amateur Championship, which he can secure if he stays in the Top 50 who automatically earn a place at Pinehurst.

Rafferty agrees that it is a sign of how far he has come over the past three years that he is now realistically contemplating being part of these iconic events.

“All these things are starting to come around which I never really thought of before. When I got to my first semi-final at the North in 2015 the last thing I was thinking about was where am I on the WAGR. To get into the top 50 in the world is a nice achievement in itself, and there’s not too many from Ireland, never mind the smallest county in the country, that have done it.”

Rafferty spent several days in the run-up to Christmas on Merseyside after being one of ten potential Walker Cup players invited to attend an informal practice session at Royal Liverpool Golf Club by Britain and Ireland captain Craig Watson and selectors Nigel Edwards and Andy Ingram. The Hoylake venue will host the bi-annual event in September and Rafferty enjoyed the experience.

“It was an interesting two days. I’d never played Hoylake so it was my first time there. Obviously this time of the year wouldn’t do it any justice, the weather was poor and you could see that the course was bit tired at the end of the season but the layout is fantastic. The clubhouse, everything about it, is amazing. To be part of a Walker Cup team there would be special and would be something that I would really enjoy.”

He also admits he really got a taste of what it could be like in September as they were given a tour of the team room, asked to do media interviews and given an opportunity to see the massive trophy up close. He says playing in the Walker Cup has been a long-term objective over the past few years but he is not going to let it become a millstone around his neck.

“The last thing I am going to be worrying about is trying to make the team. If I play good golf that will all sort itself out. I think I did show last year that I have a bit more character to me now and that I can dig deep and really push whereas a couple of years ago I probably didn’t have it in me.”

Another major event for Rafferty in 2019 will be the R&A’s Amateur Championship which is being held in Portmarnock and The Island in June and he revealed that it was a big topic of conversation in Hoylake.

“They were all asking about Portmarnock and wanting to know what it is like. I think it is going to be one of the toughest courses the Amateur has ever been played on. The best of the best are going to be there so making the cut will be my first goal.”

Since 2017, Rafferty has been on a Harrington Golf Scholarship at Maynooth University where he is studying for a degree in business and he admits he is now beginning to see the benefits of being a college golfer.

“The University this year was a big thing and there was plenty of golf there. Extra golf, but it added to the season. The scheduling got busier but it was a case that you were playing in big events, playing new people and seeing new courses. Last year I didn’t really grasp what college golf was about but this year I saw the value of it and how a few of those titles would be nice under my belt.

“College golf is definitely helping. I wouldn’t be a great practiser, I’d rather play holes, but this year I got myself into a bit of a routine and I went down two or three nights a week even though keeping on top of assignments is tricky. I am balancing it better. I have a schedule to my week now. Before I went to college I was going through the motions. I felt like I had to go down and practice but now you want to go and practice. I have a better outlook and better discipline.” 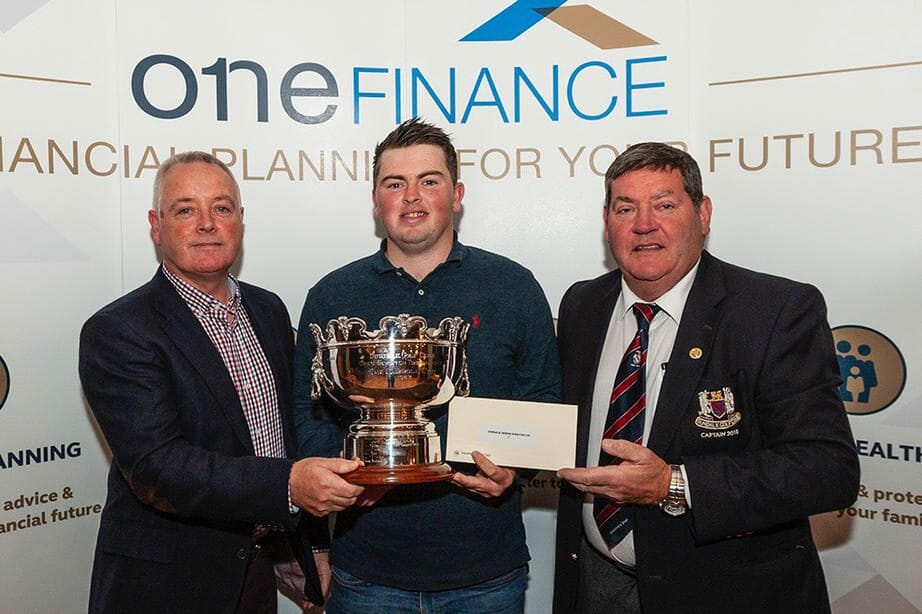 Caolan Rafferty (Dundalk) receives the 2018 Dundalk Scratch Cup from Martin McDonnell (One Finance) and Gerry Byrne, Captain, Dundalk Golf Club.
The inter-club scene provided happiness and heartbreak for Rafferty during 2018 as he was part of the first ever Dundalk team to win a senior pennant but then saw their dreams of a national pennant dashed by Athenry in the final of the Barton Shield in Thurles.

“To get over the line this year and give that little bit of thrill to everybody in Dundalk by winning the Leinster pennant was nice. Because it is such an individual game to do stuff as a team is so nice.

“To be pipped in the final of the All-Ireland was heartbreaking  though. It is amazing how close you get. It was a rough one to take. As I said to the lads, I have had plenty of heartbreak in individual golf, in championships. To learn to lose before you win is the way I have always had it. You don’t win first time out, you have to take your defeats, know what it is to have a setback and then go again. I think next year will show a good bit of character from us to try and do it again. Athenry only won it on their third attempt so we’ll take a lot from knowing that.”

After celebrating his birthday and Christmas at home in Dundalk, Rafferty flew out to America on St Stephen’s Day with Maynooth University team-mate Ronan Mullarney to take part in the 2018 Patriot All-America Invitational in Arizona and is looking forward to the year ahead.

“I am looking forward to the season in general. After Arizona, I come back and I have exams  then we go for a training week to Portugal and then hopefully I will make the panel going to South Africa. It is just flying after that and it will be Christmas before I know it. It will be all go.”

One question Raffetty gets asked a lot concerns his future plans and whether or not he intends to turn professional. He admits it is something he is thinking about but not a question that he is ready yet to answer.

“I am going to finish College and see what happens after that. I am still 50-50 on it and it is something I will need to have a real good think about because it is costly. I will sit down after college and I will weigh up my options. I won’t make a rash decision, I know that much.”

Whatever the future holds for Rafferty he certainly has an exciting season ahead and we wish him every success in 2019 and beyond.