Final day excitement at the AIG Ladies Cups and Shields 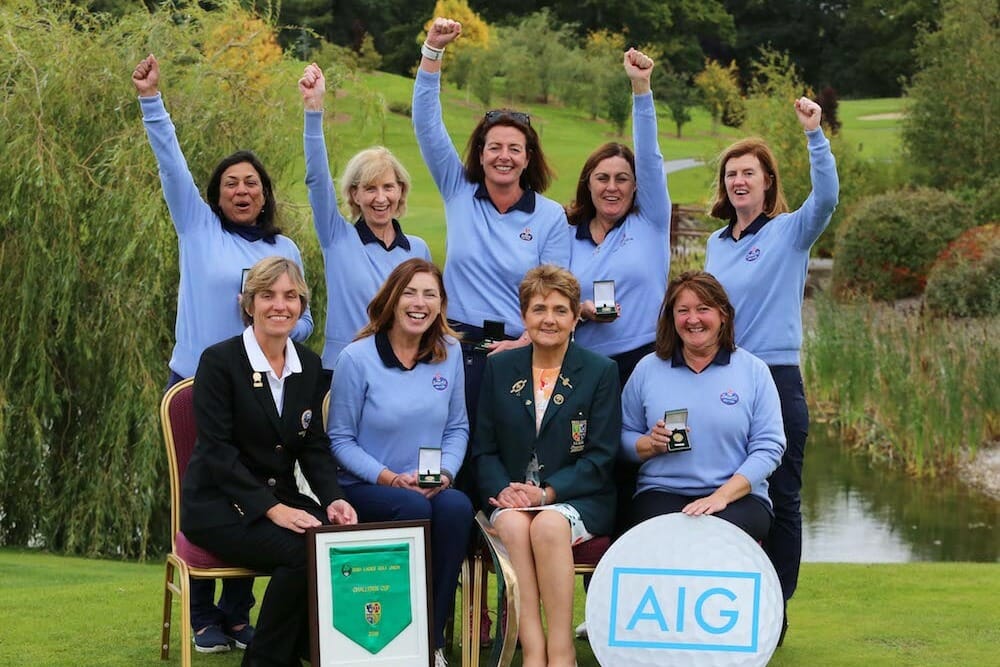 Despite being in attendance at National Interclub finals in the past, Courtown have been unsuccessful in previous attempts to win a green pennant. Their confidence this morning was sky-high however as they had overcome Ballina in a nail biting semi-final yesterday evening. It was an especially emotional week for Eileen Cullen, who missed the District Finals due to the death of her husband Michael just the night before, but team manager Laura Funge was insistent that he was keeping an eye on Eileen and the team at Knightsbrook.

“Our match in the District Final went to the 22nd hole and there is no doubt that Michael put us through. The whole team played for Eileen that day and it is great that we have her on the team this week.”

Fast-forward to today in the All-Ireland final and Catherine Quinn and Mary Osborne moved ahead of their opponents early in the game. When they secured their match on the 14th green, the Co. Wexford team was close to making club history. Stella Courtney and Mary Kilbride didn’t waste any time and they closed out their match 4&3 shortly afterwards.

“This is a wonderful day for Courtown Golf Club,” said the Team Manager. “After 75 years we are here as All-Ireland Champions and it’s a wonderful feeling, I am so delighted for the players, the Lady Captain and the Club.”

Carol Loftus will enjoy the celebrations at Rathfarnham tonight as she clinched the winning point on the 18th green in the AIG Junior Cup Final. Once Lynda Keartland and Pamela Cassidy had carded early victories, Loftus, who was two up with three holes to play, produced a nerveless finish to secure a 2 match victory – the first for an East Leinster team since Dublin City won the Junior Cup in 2009.

And so all that remained to be decided was the AIG Challenge Cup Final between Macroom and Smurfit. Once again, the deciding match need additional holes and Noreen O’Sullivan (Macroom) and Maire Kearns (Smurfit) made their way to the 362 yard par 4 1st. Both Zenia Martin and Lorraine Mooney, who had won their matches, watched on as their teammate fought to get the vital finishing point. Ultimately on the 20th green it was elation for Smurfit when Kearns holed the winning putt for a 3.5 to 1.5 win.

AIG have been the title sponsor of the AIG Ladies Cups and Shields since 2015 and ILGU President Vonnie Noonan is grateful for their continued support:

“AIG is a major sponsor of GAA Football, Hurling and Camogie teams as well as men’s and ladies tennis and amateur golf. We are privileged to be in the company of these great national sporting bodies. AIG’s continued generosity in supporting Irish women’s amateur golf is very much appreciated by the ILGU and clubs across the country.”

The AIG Cups and Shields will return to Knightsbrook in 2019.