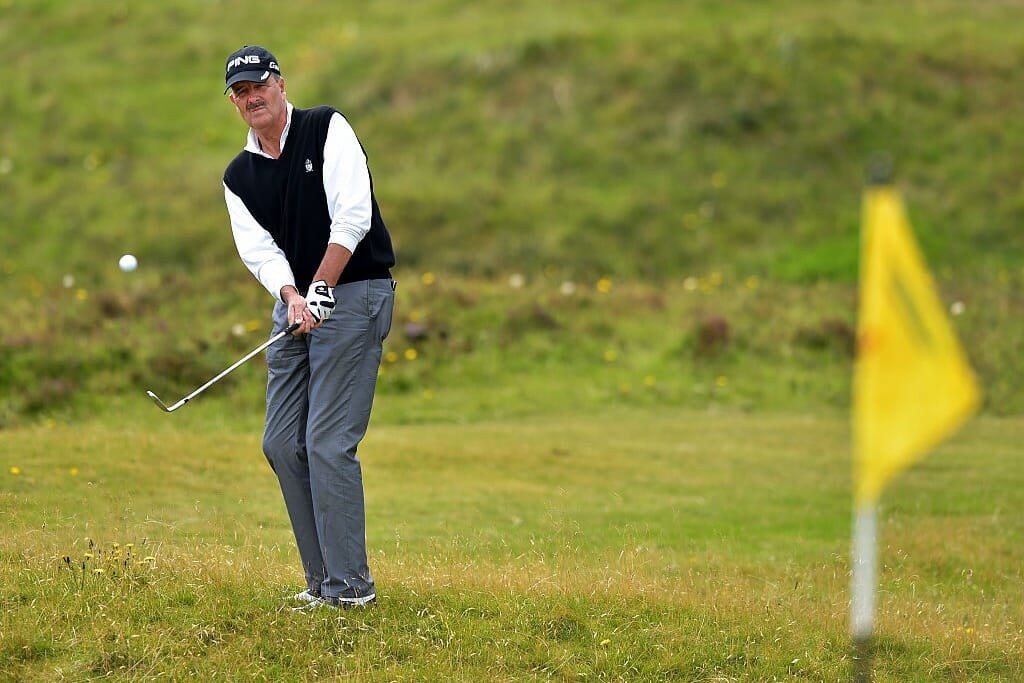 The trio joined their Mid-Am and Senior-Am teammates from Great Britain on Monday and with a couple of practice rounds now under their belts, they’re set to face-off against their United States counterparts in the competition proper, April 19-21.

From an Irish perspective, it is an esteemed trio that have earned the right to represent our golfing island on the 14-man team. Former two-time East of Ireland and South of Ireland winner, Morrow (1975, 83) (1983, ’96) has big-hitting Flogas Irish Amateur Open champion O’Keeffe for company while Garth McGimpsey at 63 years young remains one of Ireland’s most decorated amateur players.

They can look forward to what promises to be a world–class experience for all participants, while the event is expected to showcase top amateur golfers from the U.S. and GB&I in the true spirit, character and competitiveness of amateur golf, all for the benefit of charity.

Players will compete over three days through the traditional team match-play formats of foursome, fourball and singles. Each team will be comprised of 14 players separated into three categories: six (6) Mid-Am members (age 25 to 54), six (6) Senior members age 55 and older and two (2) Senior members age 65 and older. Morrow falls into this category, having been picked as a spritely Senior before some welcomed numbers were crunched:

“I actually was picked as a senior but then when we looked at dates we discovered I become a super senior the day before,” noted Morrow upon hearing the official announcement, sure to prove a secret weapon in the super senior category.

The 2018 renewal welcomes two new team captains to the event. Bob Lewis will head up the U.S. Team with Peter McEvoy taking the reins for team GB&I. Lewis will lead the U.S. Team in defense of their back-to-back Concession Cup titles. McEvoy looks to steer the GB&I squad to victory and take the Sir Michael Bonallack and William Campbell Trophy across the pond for the first time.

McEvoy, 64, brings a wealth of competitive golf experience to the GB&I team. He is one of Great Britain’s most decorated amateur golfers. His outstanding career includes winning back-to-back British Amateur Championships in 1977 and 1978. Additionally, McEvoy represented Great Britain and Ireland as a player on five Walker Cup teams between 1977 and 1989. Additionally, he was the winning GB&I Walker Cup captain in 1999 and 2001.

He also enjoyed five appearances as a player on Eisenhower Trophy teams, including 1988 when he won the individual event to go with a team victory for Great Britain and Ireland. Ten years later, he represented GBamp;I as the winning captain for the 1998 Eisenhower trophy team. McEvoy has shined during his career on two of golf’s biggest stages. He was the low amateur at The Open in 1978 and 1979 and in 1978 became the first British amateur golfer to make the cut at the Masters Tournament.

“It will be a great thrill to captain team GB&I,” said McEvoy when early preparations were underway. “I’m excited about the strength of our team and we look forward to the challenge of bringing home a victory. Plus, knowing that the Concession Cup is focused on giving back to charity makes my participation all the more rewarding.”

It’s all set to be a wonderful three days golf. Let’s hope both teams give a good account of themselves but whatever happens, bounds will be created and solidified throughout the tournament that will transcend the game of golf. Isn’t that why we play the game after all?

The third and final day of competition will feature 14 singles matches. The singles competition is comprised of one player from each team in match play competition. Immediately following play the closing ceremonies will be held at The Concession Golf Club.