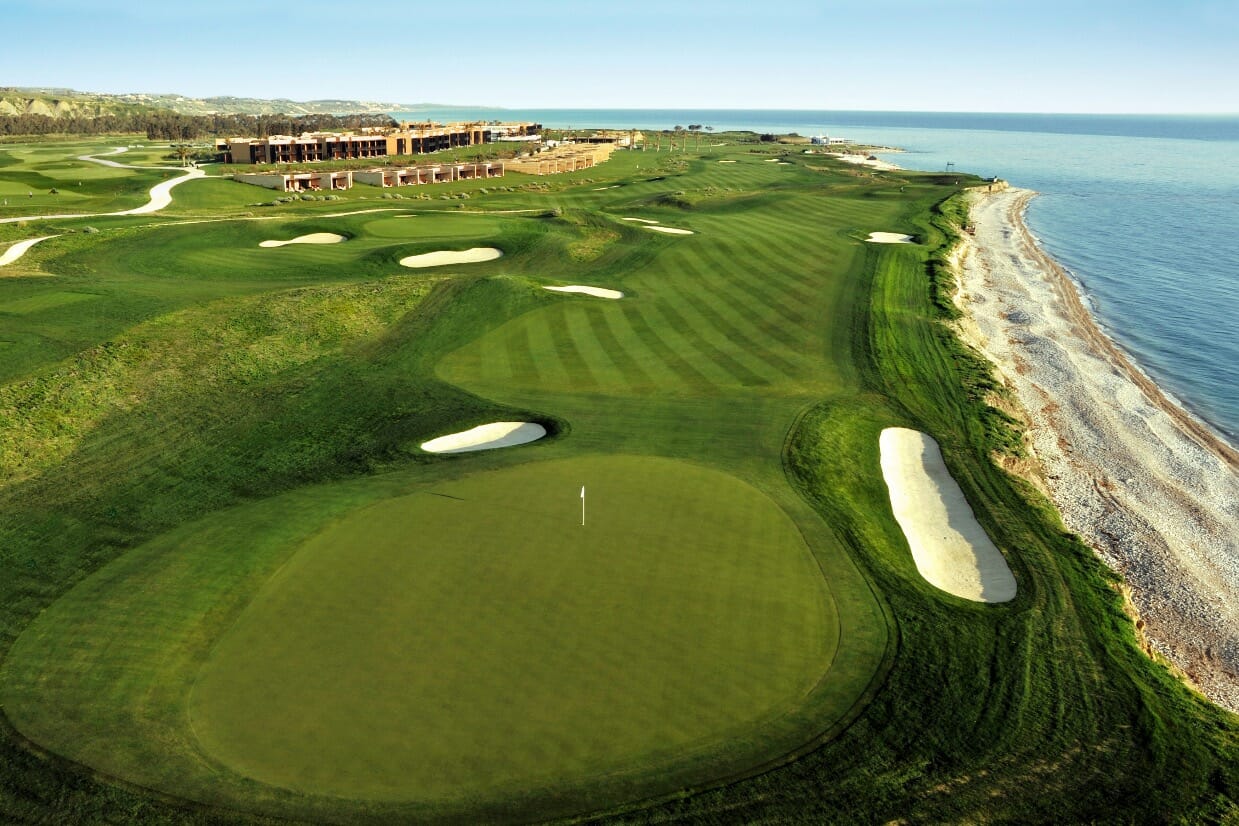 You may not have considered Sicily as a destination for your golf trip but on a recent trip to the island Mark McGowan discovered some fabulous golf courses, wonderful resorts and outstanding cuisine.

When it comes to Mediterranean golfing destinations, Sicily may not be the first to spring to mind, but basking year-round in the sun, the island is an ideal destination as the nights get longer and the temperature drops on domestic shores.

A long history of invasion and conquest, beginning with the Phoenicians in the first millennia B.C., through the Carthaginians, the Greeks, the Romans, the Vandals, the Goths, the Moors, the Normans, the French, the Germans, the Spanish, and even the British, make modern Sicily a cultural cocktail.  Italian is the official language, of course, but Sicilians regularly switch to a local dialect barely recognisable to that of the mainland.

Geographically, Sicily’s most southern point is more equatorial than most of the North African coast, virtually guaranteeing sunshine all year long, with temperatures reaching 40 degrees Celsius in the summer months. Sandy beaches can be found around the entire island, and the warm Mediterranean Sea makes for ideal bathing.

Sicilian golf consists of five resorts, which boast seven courses between them. Golf is a relatively new activity on the island, with the oldest course, Il Picciolo), not even 30 years in existence. The newest resort, Verdura, has two courses and is situated on the South-West side of the Island. Donnafugata, on the South-East coast also has two courses, while Monasteri, Le Saie and Il Picciolo each have one course and are all situated on the East coast.

Verdura Golf and Spa Resort is the undoubted jewel in the crown. Most easily accessed from Palermo airport, a short detour which might be of interest to fans of Mario Puzo and Francis Ford Coppola is the village of Corleone, whose name was adopted by the legendary (if fictional) mob boss in the Mafioso classics. Although affiliated by name only, in a rare example of life imitating art, in the 1980s and 1990s, the Corleonesi became the most powerful sector of the Sicilian mafia in spite of relatively modest resources.

Set on an expanse of coastal land, the Verdura luxury resort is modernist to the core, and boasts one of the Italy’s leading spas. Two courses, the East and the West, offer a demanding challenge of championship proportions along the picturesque coastline. Host of the Sicilian Open in 2012 and 2017 (the event wasn’t held in the four intervening years) on the European Tour, Álvaro Quirós and Thorbjørn Olesen will both have very fond memories of their visit to Verdura.

Beautifully manicured and conditioned, both courses are playable by golfers of all standards with a variety of long and challenging holes to suit the longer hitters, and short holes where accuracy rather than power, is key. The short par-3 6th and the par-4 18th on the East course are the signature holes, with the latter requiring a nerve racking drive along rugged cliffs with a watery grave below for errant shots.

In terms of cuisine, the resort offers a variety of options and locations to ensure guests are never bored at meal times. The main hotel restaurant is formal, and rather upscale, but this is offset by a traditional Sicilian Trattoria close by, and an Italian Pizzeria by the golf club. Additionally, there is a seafood restaurant by the shore behind the sixth green which is open April to October. 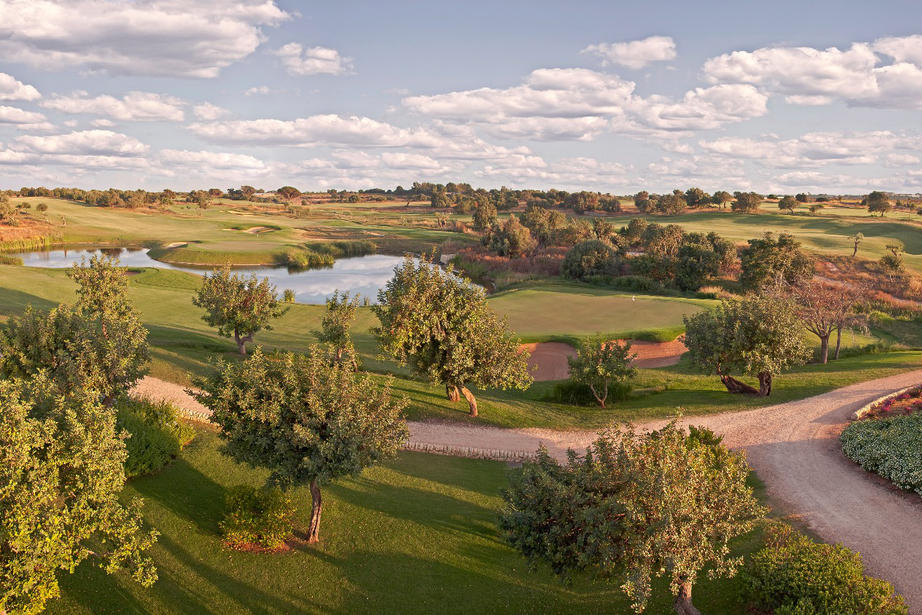 Located close to Verdura is the historic city of Agrigento. Founded by the Greeks in the sixth century, B.C., Agrigento is home to the Valley of the Temples. A ridge, rather than an actual valley, upon which stand the Temple of Juno and the Temple of Concordia and an hour’s drive East of Agrigento lies Donnafugata Golf and Spa Resort. In the shadow of the historic castle of the same name, Donnafugata offers two different challenges in its Links and Parkland courses. The Links Course – although not a typical links by Irish standards – is an undulating journey through an inlet valley just off the Mediterranean Sea. Largely devoid of trees, the Links Course offers breath-taking panoramic sea views and a challenge to suit golfers of all levels. The Parkland Course is designed by Gary Player, and hosted the Sicilian Open in 2011 when won by Raphaël Jacquelin.

The Parkland course is vastly different from the Links course, as you may expect, and occupies the opposite end of the resort where the fertile soils surrounding several of the resort’s springs facilitates the growth of carob and olive trees, and many holes feature traditional stone walls – a surviving token from the estate’s agricultural past. Dense scrub punishes errant drives on most holes, and water comes into play on five of the eighteen.

A hot and exceptionally dry summer – most of the island hasn’t seen rain in six months – has left the course in need of a drop of rain, however, being overly critical would be unfair, and the resort itself is incredibly impressive, and affords a certain sense of intimacy in spite of its expansive layout. Three restaurants – the highlight of which is the open-air bar and grill area – serve up a host of Sicilian specialities, composed entirely of locally sourced ingredients, and cooked to perfection.

Not far from Donnafugata, and a little further inland, is the hillside city of Ragusa. A city of two halves, Ragusa’s lower half – Ragusa Ibla – was destroyed by the large earthquake of 1693. Subsequently, Ragusa Upper was constructed on the other side of a canyon and the two sides were only connected in 1926. Ragusa Ibla is home to a number of Baroque-style cathedrals, reconstructed after the earthquake, showcasing the grandeur of the Catholic Church in all its splendour.

A 90-minute drive east of Ragusa is Allegroitalia Siracusa Golf Monasteri, on the outskirts of Siracusa, one of the oldest Greek settlements on the island. Monasteri is, as the name suggests, a former Benedictine Monastery that has been converted into a Golf and Spa Resort. Combining the modern elegance of a spa resort with the rustic charm of a traditional Roman farm, Monasteri is set within an 86-acre orange, lemon and prickly pear plantation, all of which are features of the 18-hole golf course on site.

A 6,520 metre, par-71, Monasteri golf course is a fascinating blend of expansive, wide-open holes and devilishly narrow driving channels. Suffering a similar plight to Donnafugata in terms of an extended arid spell, Monasteri was a little under the weather when I visited. Most unusual was the wealth of prickly pear cactus trees – a most unusual sight – that lined the fairways on several holes, most notably the low indexed, par-4 sixth, where the cacti stand like sentries on both sides of the fairway, making an errant drive both a fearsome and painful thought.

The course itself features a number of very good holes, and is set to undergo some small renovations. The restaurant is spacious, with a large outdoor fireplace ideal for late night gathering in late autumn and early spring. The rooms are contemporary, and very impressive, and the spa, whilst considerably smaller than the two previous resorts, is ideal for relaxation and tranquillity.

Forty minutes north of Siracusa is Le Saie Golf Club. Opened in 2014, Le Saie is Sicily’s youngest golf course. Featuring water hazards throughout, and beautifully kept fairways and greens, Le Saie also boasts a three-tier driving range. Annexed to the course is the Le Saie resort, which is still under construction. Due for completion in mid-2018, the resort is enormous – capable of accommodating 1000 guests.

Last, but by no means least, is Il Picciolo – Sicily’s oldest golf course – part of the Etna Golf and Spa Resort. The name is of course derived from the active volcano – Europe’s highest – in whose shadow the course lies, and whose rich, fertile volcanic plains make Il Picciolo an entirely different golfing experience from the island’s six other courses. Tree lined, and beautifully manicured, it is most definitely a course you must think your way around. Spectacular views of a smouldering Mount Etna, along with visible lava stone on the 16th and 17th holes make for a unique acquaintance.

Unlike Dooks, however, the park surrounding Il Picciolo is a haven of lush Mediterranean vegetation, including vineyards, orchards and, of course, the olive trees that are synonymous with the entire island. The four-star hotel is elegant and benefits from cooler temperatures mid-summer due to it being almost 500 metres above sea-level.

Apart from Etna itself, which is of course a major attraction, the nearby coastal towns of Taormina and Giardini Nexus are major tourist attractions due to their ancient Greek heritage and some of the artefacts and archaeological findings that have been uncovered. Perhaps most interesting is the Ancient Greek Theatre in Taormina, built in the third century B.C., and is still used for concerts and operas to this day.

Although it may fall short of the sheer quantity of golf courses of the Algarve or the Costa del Sol, and the sheer quality of golf courses of the British Isles and Ireland, Sicily provides something entirely different. A relaxing family getaway, or a romantic excursion with some golf to tip the scales. Soak up the sun, immerse yourself in the culture, the conviviality and the cuisine. Enjoy the wine, and a little pampering. And above all else, don’t call them Italian…