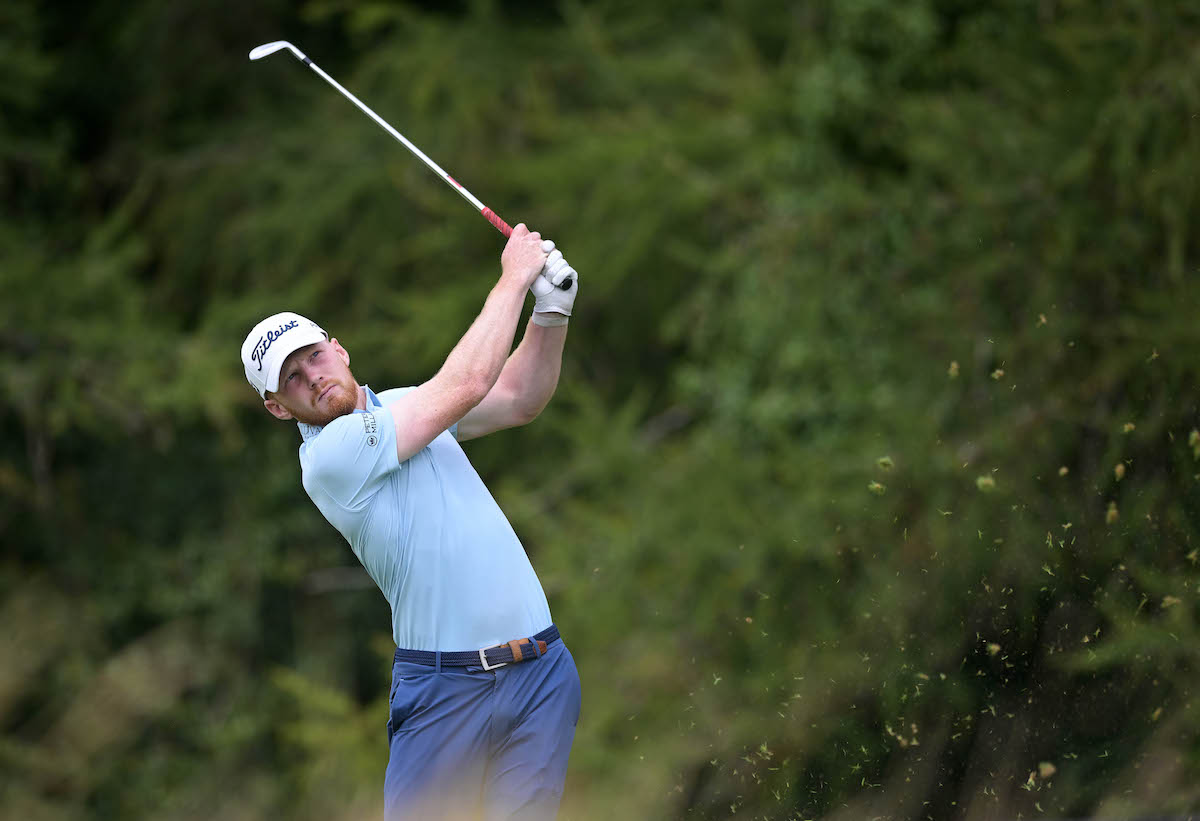 Six shots might be too much to make up for Kinsale’s John Murphy if he is to claim his maiden Challenge Tour win on home soil but there is still plenty to play for him and a lot of the Irish players at the Irish Challenge tomorrow.

The leading Irish player will receive the Christy O’Connor trophy and punch a ticket to next year’s Horizon Irish Open at the K Club.

The Cork man will be in the final group with compatriot Gary Hurley as he looks to put on a Cameron Smithesque charge and hunt down Todd Clements but the likes of Conor Purcell, James Sugrue and Tom McKibbin will be aiming for low rounds to book their home ticket for next year.

“It’s all to play for by the looks of things, Gary had a great round today, great to see him playing well,” said Murphy after a battling two-over 74. “Conor is still up there, Tom had a good round again so hopefully there will be an Irish winner of the actual trophy opposed to the Christy O’Connor award.”

A large following gathered to see the 24-year-old alongside Purcell and Clements in the final group with his caddy remarking on the biggest crowd he had ever seen at a Challenge Tour event.

Things started well for Murphy who moved to within one with a birdie on the par-5 3rd but the wheels soon began to fall off with four bogeys in six holes including back-to-back dropped shots before the turn.

A birdie on 11 stopped the bleeding and a second gain in three holes looked to have reignited his charge as he moved back to within five but a bogey from position A on the 14th fairway halted his momentum.

“I had a lot of chances out there, thought I hit a lot of really nice putts from long range but nothing really fell today. I still feel like the game is in pretty good shape it obviously wasn’t as easy out there today but I did a good job of keeping it together could have easily got away from me after making a few bogeys in a row but held it together nicely on the back nine and try improve tomorrow,” said Murphy who occupies third place.

“There was a good bunch out there today, nice to have people out watching hopefully be a few more out tomorrow so just have to go about my business and get ready to go again tomorrow.”

Fellow Rebel Sugrue hasn’t made an Irish Open appearance since the behind closed doors edition in 2020 at Galgorm Castle and he could come under the radar with his target fixed firmly on Hurley rather than the lead.

“That would be nice. It’s great to have that, I’m looking forward to it, hopefully the weather will be good tomorrow, we’ll go out there and give it a rip and see where it takes us,” said the 2019 Amateur champion who has Home International Rob Brazill on the bag.

Sugrue bounced back from a poor opening nine where three bogeys in four holes saw him turn in 38 with birdies on ten and fifteen to chisel out a level-par 72 to remain on six-under.

“That was a tougher weather day out there, I was driving to the course today and it was pouring rain and I wasn’t looking forward to it too much, but it cleared on the range before we went out and was ok on and off. It’s weather I’m well used to unfortunately and I played pretty well in it to be honest.

“I’m happy with the recovery on the back nine, you really got to be in position off the tee on that nine and when it started raining the rough was sticky, I found a few juicy spots and found a lot of bunkers today but all in all I’m happy enough. I probably didn’t gain any ground today, but I didn’t lose any either.”