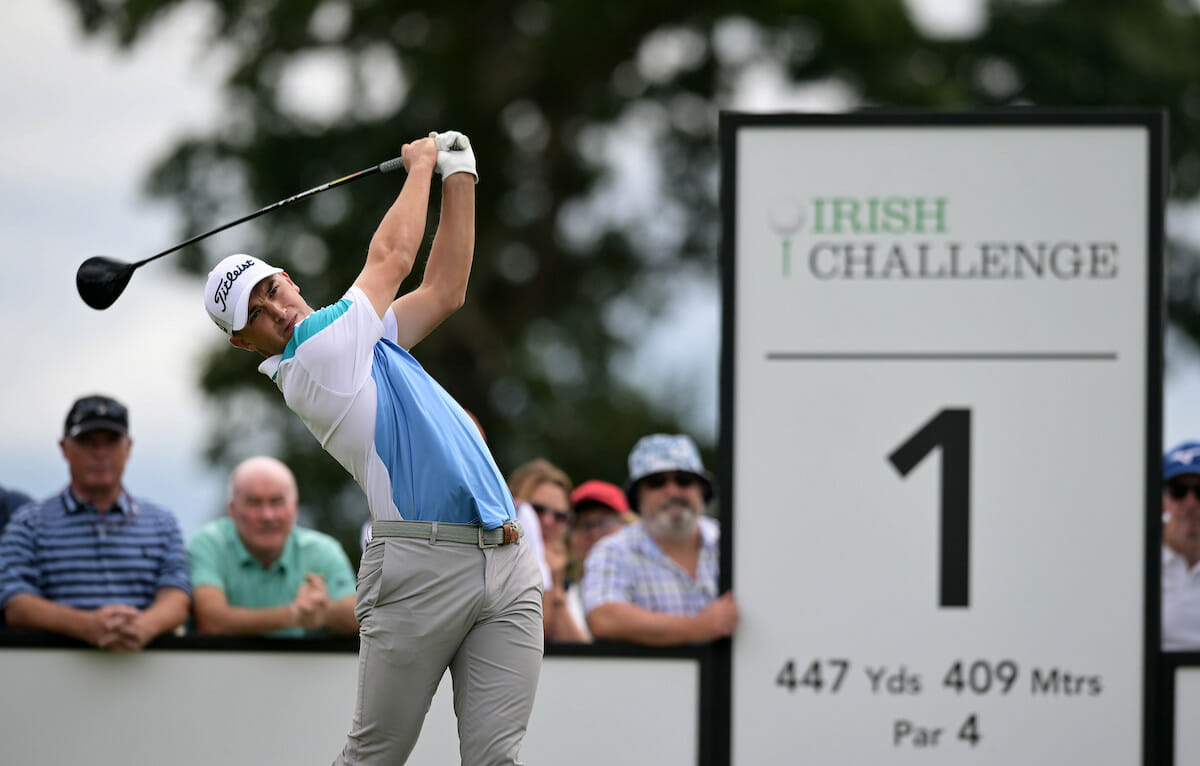 Todd Clements (ENG) on Day Two of the Irish Challenge 2022 at The K Club on July 29, 2022 in Straffan, Ireland. (Photo by Charles McQuillan/Getty Images)

John Murphy and Conor Purcell will head into the weekend at the Irish Challenge in a share of second place and the closest challengers to leader Todd Clements at The K Club.

Murphy carded six birdies and a bogey in a five-under 67 at the Palmer South on day two, with Purcell signing for an eagle, five birdies and three bogeys in a four-under 68 to set the Irish pace at 11-under-par.

That’s a pair of shots behind leader Clements, whose second round 65 contained eight birdies and one bogey as he climbed to the top of the standings at 13-under-par.

“Nice to finish on a positive,” said Murphy after a 25-foot putt dropped on the 18th.

“I saw Conor’s name at the top of the leaderboard at the back of the green and I thought it would be pretty cool to be playing with him in the last group tomorrow. I don’t know if it’s enough to do it but myself and Conor are good friends and it would be cool to generate a bit of buzz tomorrow and create a bit of interest locally.

“That’s the kind of thing you fantasise about playing against your friend with a home crowd and a chance to showcase and showoff.

“It’s nice to play at home in front of friends and family and I am looking forward to playing two more days of it. There will be times you won’t get to play two more rounds so now that I can I am looking to enjoy it.”

Purcell added: “Today was good, I started off pretty well, I had a poor middle stretch on my front nine but made a nice eagle on ten and followed that up with back-to-back birdies, I started the back nine well and just kept going so I was very happy.

“I knew if I got off to a slow start this morning it could have been a slog out there, but thankfully the birdie on three helped to settle me into it and get under par for the day early and build from there.

“It did go a bit flat for a few holes after that but the eagle at ten lit things a bit and I started holing putts and seeing the ball roll in which was good.

The pair will need to pick up the pace over the weekend to catch the impressive Clements, though, the 25-year-old in a strong position at the halfway stage as he goes in search of his first Challenge Tour win.

Galgorm’s Tom McKibbin and Saadiyat Beach-based Gary Hurley are the next best of the Irish contingent, sitting in a share of 10th at seven-under-par after rounds of 70 and 69 respectively on their second days.

“I hit a lot of good putts that skimmed the edges, but I played solid enough after starting five, five so to be three-under for the last 15 holes is pretty good, especially the back nine, the wind definitely picked up on a few of the holes,” said McKibbin.

“The par fives were difficult, the third is normally easy but I was getting nowhere near it in two today I fought well.

“I didn’t hit it as close as I would have liked to so it’s obviously harder to hole putts but I tried to stay patient and especially on these greens where they are quite fast you don’t want to start forcing it you can easily find yourself having five and six footers which is even more stressful.”

Mallow’s James Sugrue is also well placed for a weekend charge in a tie for 12th at six-under-par after an impressive 66 in his second round, while amateur duo Matthew McClean (Malone) and Robert Moran (Castle) made waves by making the cut at four-under.

Moran had a level-par 72 in his second round thanks to four birdies, two bogeys and a double-bogey, but six birdies in a bogey-free 66 pulled McClean from below the cut line into the weekend after a fine display.

“I played lovely, didn’t really come close to a bogey really so it was lovely,” said the Portrush Scratch Cup winner. “Didn’t birdie any of the par fives either so maybe a few chances went. Missed a two-footer on 12 as well so that wasn’t ideal but I played lovely it was exactly what I was trying to do after yesterday.

“Just putted a lot better today. Played OK yesterday but held nothing and missed a few four footers. Played much better today but held a couple of 15-20 footers which keeps the round going.

“Those sort of putts sometimes go in or sometimes don’t drop at all, yesterday was the opposite, today a good few of them went in so that kept me going and I didn’t really make any mistakes.”

Ballymena’s Dermot McElroy is also at four-under-par heading into the weekend after a five-under 67 in his second round, with Paul McBride the final Irishman to make the cut as a 75 meant he made it on the number at one-under-par.

There was heartbreak for Ronan Mullarney who, despite a one-under 71 on Friday, missed the cut by one shot at level-par, with a 73 meaning Derry’s Ruaidhri McGee ended his tournament at one-over-par.

Michael Young, Jonathan Yates and Gavin Moynihan all finished the week at three-over after second rounds of 71, 74 and 75 respectively, with amateur Mark Power also left on that score after a level-par 72 on day two.

Robin Dawson was under-par in his second round with a 71 but still missed the cut at four-over-par, where Conor O’Rourke also finished following a 73, with Liam Grehan and Luke Donnelly missing out at nine- and 10-over respectively.

Charlie Williams would finish the tournament at 13-over-par, with Rhys Clarke a shot further back at 14-over and amateur Hugh Foley at 16-over.