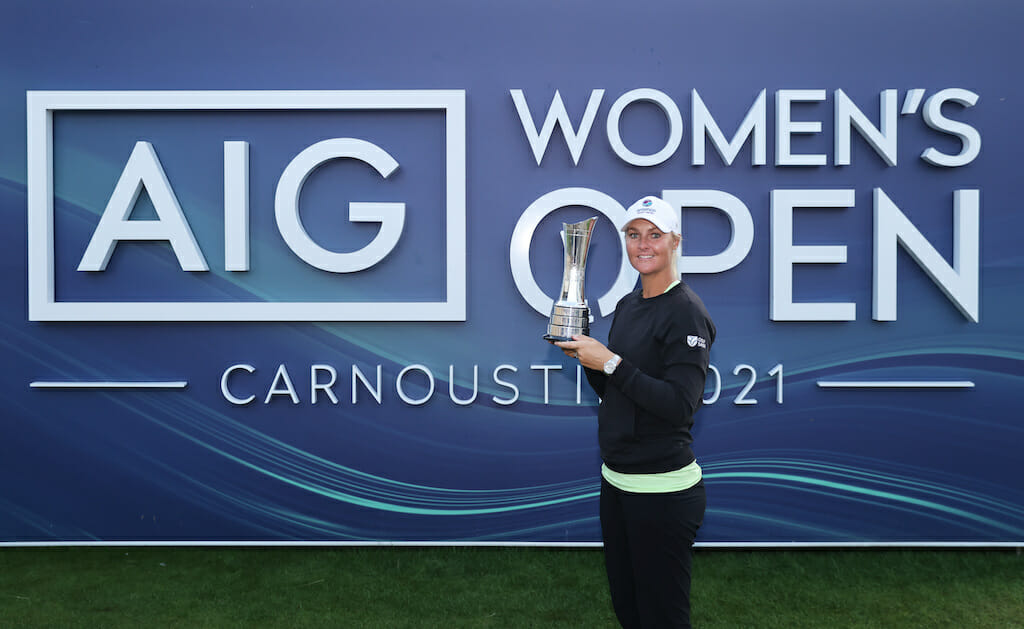 The AIG Women’s Open, the final major in the 2022 global golf calendar, will welcome the world’s best women golfers to Muirfield from 4-7 August where a cast of past and potential champions will grace the fairways.

Anna Nordqvist, the defending champion, is one of the most successful players of her generation with 13 professional victories, her most recent coming on the Ladies European Tour this month. Nordqvist has also notably chalked up three major wins and in the Solheim Cup is one of Europe’s leading points-scorers of all time.

Reflecting on her victory last year, Nordqvist said, “As a European, the AIG Women’s Open is a major that means a lot to me. It was also an extremely special win because it was so close to where my friends and family live, so I felt very much at home. The support I had from the crowd was unbelievable and I hope it is just as warm this year at Muirfield when I try to defend my title.”

Nordqvist is one of 11 past champions in the AIG Women’s Open field at Muirfield, including:

These champions have provided inspiration to generations of female golfers including the prodigious talent that now tops the Women’s World Golf Rankings. Of the 18 players from the top 20 who are teeing up at Muirfield, 14 are already major champions.

One player seeking their first major victory at the AIG Women’s Open is Thailand’s Atthaya Thitikul, who was the low-amateur at the championship in 2018 and 2019.

The 19-year-old’s rise through the professional rankings continues an exemplary amateur career which saw Thitikul make headlines in 2017 as the youngest player to win a professional golf tournament aged 14 years, four months and 19 days. She subsequently also reached world number one in the World Amateur Golf Rankings®.

Thitikul credits her compatriots, the Jutanugarn sisters, Moriya and Ariya – the 2016 Champion – as inspiration during her prolific adolescence.

Thitikul said, “They [Ariya and Moriya Jutanugarn] were already established on the LPGA Tour when I was taking up the sport and when Ariya won the AIG Women’s Open that was a huge moment because it showed that it’s possible for a girl like me to reach the pinnacle of the sport.”

While Thitikul’s own ascent through the rankings over the past 12 months has been impressive, few can match that of Sweden’s Linn Grant, 23, who was 444th in the world when the AIG Women’s Open was played at Carnoustie in 2021. Six wins since then on the LET Access, Sunshine Ladies Tour and LET – including a sensational victory co-sanctioned by the DP World Tour where she beat the field of women and men by nine shots – now see her ranked 102nd.

Through The R&A’s organisation and support of global amateur championships, pathways to the elite game are forged to help ensure amateur champions gain valuable experience of the professional game, seven qualifying spots into the AIG Women’s Open are reserved for the following:

Nordqvist highlighted the strength and diversity of the talent within the women’s game, saying, “As a competitor I am always looking to test myself against the best players, and the AIG Women’s Open is one of the greatest challenges in golf. The field is so impressive. We have legends of the game who we all looked up to and aspired to follow in their footsteps, as well as a long list of fantastic players on tour, not to mention some of the younger players who are stepping up and ripping it.

“It’s truly great to see the strength of our sport and it’s through championships like the AIG Women’s Open that we are able to showcase the rate it is growing and building. It’s definitely an exciting time for women’s sport and, with this stage, the history and the players, I don’t think it gets much more exciting than the AIG Women’s Open.”

The AIG Women’s Open will take place from 4 – 7 August 2022 at Muirfield, with tickets now on sale via aigwomensopen.com.