Hill the leading qualifier in Lahinch after flirting with historic 59 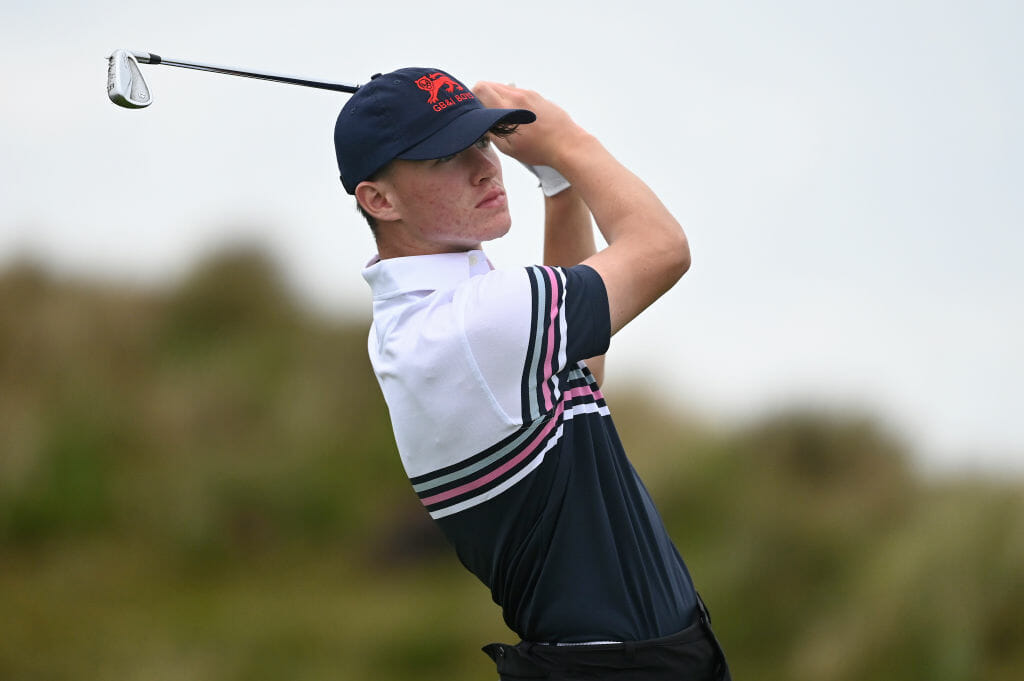 Leading qualifier Joshua Hill flirted with history after he topped the standings after 36 holes at the South of Ireland Championship in Lahinch.

The youngster became the first player to reach double figures as he eventually finished on twelve-under after backing up a steady round of 70 with a whopping ten-under 62 on an extremely vulnerable golf course.

Robert Rock shot a course record 60 here in the 2019 Irish Open as he came agonisingly close to an elusive 59 on the DP World Tour, but Hill certainly launched a serious assault on that number after moving to nine-under for his round through 13 holes that even included a dropped shot on the 8th!

After an opening par, five birdies in six holes saw the Galgorm native soar to the top of the leaderboard before a blistering run of five successive birdies raised eyebrows over the potential for something very special.

Pars on 14 and 15 brought him back down to earth somewhat before a birdie on 16 left him needing a brace of birdies to equal Rock’s record or birdie, eagle for a piece of history.

In the end it was a closing pair of pars and a second round of 62 will matter little over the weekend as the championship switches to matchplay with Hill teeing off on Friday with a target on his back as the leading qualifier.

“It’s my lowest ever competitive round,” said the 18-year-old. “I just wanted to qualify and I was playing safe to the middle of the greens and all of sudden 30 and 40-footers started to drop on the front nine.

“Then on the back nine, I thought I might as well go for it a little bit and have fun with it. It was good fun out there.”

Hill, who turns 19 next month is University of South Alabama bound as he plots his next step towards a professional career and he has shown up well in the big events this term placing third in the Munster Stroke, 18th in the Irish Amateur and 14th in the North.

“I’d like to go pro and give it a go and have the chance to fall back and be a golf coach if it doesn’t work out,” said Hill, who is 15th in the Bridgestone Order of Merit and would likely need to win this week to earn a call up for next month’s Home Internationals at Ballyliffin. “I am playing Mullingar and the Close but the Homes team is picked after this so I would have to go pretty far.”

Hill made the quarter-final last year, going down to beaten finalist and reigning West of Ireland champion Alan Fahy and but he is looking to turn his consistency into silverware this weekend.

“I prefer strokeplay because today kind of feels like nothing now, and it’s all back to all square. It’s lovely down here and I will definitely enjoy it. It’s been a while since I won the McGregor Trophy for the English Under 16s in 2019.

“I also won the Connacht and Leinster that year. Since then I have been playing alright and had a lot of top 20s.”

Defending champion TJ Ford has endured a disappointing season admittedly by his own lofty standards but was optimistic that a return to a happy hunting ground could inspire the Sligo native to better things and so it has proven thus far.

The Rosses Point man wasn’t going to let Hill take all the spotlight on a picture-perfect morning in Lahinch as he cruised around in a flawless eight-under 64 to qualify in second place.

The Irish international carded three birdies in four holes from the second before birdies on 7 and 9 saw him turn in 31. Ford carded further gains on 11 and 12 before a third two of the day on the par-3 16th saw him reach double figures for the championship.

“I played really well to come through and happy to put up some good numbers it has been a long brutal season and I am delighted to finally put some good scores together.

“There was a bit of that vibe of coming back to where I’ve won and obviously I put in some hard work with my coach before I came down and I started controlling my ball and hitting it a bit better and I got some putts to fall which might have been the Lahinch effect but I’m delighted to be playing well so far, dug in a bit in the first round but got it going today,” added Ford.

Elm Park’s Charlie Denvir matched Ford’s round of 64 to qualify in third place on nine-under-par.

North of Ireland and East of Ireland champions Hugh Foley and Alex Maguire are both safely through on seven-under as is Irish Amateur champion Colm Campbell Jnr on –4.

Overnight leaders Richard Knightly and Jordan Hood avoided any disasters to progress at their ease.

Peter O’Keeffe will be waiting in the long grass after he qualified in 22nd place and he will be eying a scalp on Friday as one of the bigger names to qualify down the leaderboard, fresh off his run to the quarter-finals of the Amateur Championship.

West of Ireland winner Alan Fahy and Liam Nolan are also among a star studded leaderboard heading into the matchplay stages.

The cut fell at two-over with the top-64 players progressing into the last-64 on Friday with six rounds of matchplay to go until a winner is crowned on Sunday.