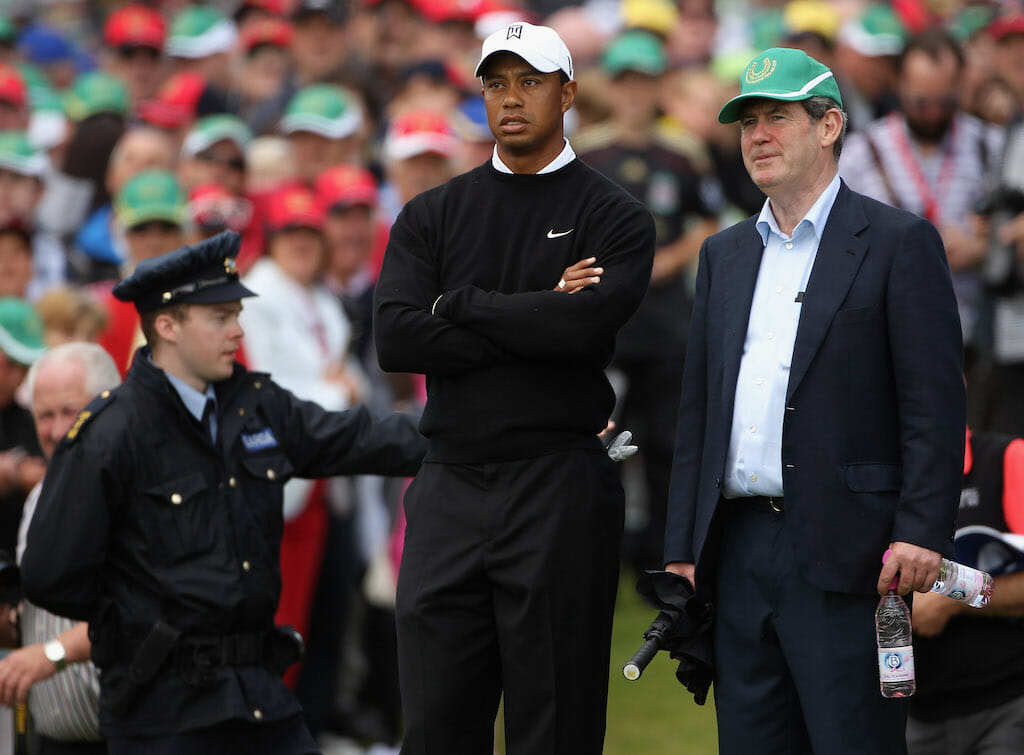 You might’ve seen amid the madness that was Tiger Woods’ eagerly anticipated return to competitive golf earlier this year at the Masters, that a certain VIP guest nabbed a quiet word with the great man where few others could.

At Augusta National, as Woods made his way through a tunnel of raucous spectators competing for his attention ahead of the tournament, JP McManus met his gaze that was otherwise fixed to the floor.

Tiger’s smile beamed. The pair embraced. Dermot Desmond got in on the act, and sure enough, the week after their brief encounter, it was confirmed that Woods would return to Limerick for a fourth occasion in support of his old friend JP.

“Tiger has been a great friend and avid supporter of the Pro-Am for a very long time and we are absolutely thrilled he has committed to play once again in the tournament,” said McManus.

“His presence at Adare Manor will undoubtedly bring huge excitement to the thousands of spectators and we are very grateful to him for giving up his free time to be with us.”

McManus can appreciate how precious free time is to someone as in-demand as Woods. From humble beginnings, the Limerick local morphed his bookmaking business into an empire, but for all his notoriety, JP has long tried to avoid the spotlight.

Given Woods’ global stardom, anonymity is hard found but with the pair’s shared ambition for their respective careers, love of golf and penchant for privacy, they had more in common than most.

They first met by chance in 1998, Woods already one of the most famous faces on the planet. McManus an owner of a number of five-star sanctuaries where Woods could hide.

JP’s Pro-Am project was already making waves but when Woods committed in 2000, a tsunami of interest followed. Everyone wanted a piece.

Not just signing up for the tournament at Adare, Woods would give more of his time to the highest bidder, auctioning a round of golf with himself and good friend Mark O’Meara in 2000. The privilege came with a price tag of €1.78m for the Pro-Am’s nominated charities, paid by billionaire financier, Joe Lewis.

The McManus and Woods friendship extended beyond the fairways too. When Woods married his now ex-wife Elin Nordegren in 2004, he did so at the Sandy Lane Hotel in Barbados, owned by McManus, Desmond and JP Magnier.

And when the Open Championship would roll around each year, Woods would make his way to Ireland to sharpen his links game in advance, with McManus reportedly on-hand to make Woods feel right at home over a bottle of red in the evening.

Even in 2010, when Woods’ reputation was being dragged through the mud in the aftermath of his multiple extra-marital affairs coming to light, Woods, who would’ve been forgiven for giving his old pal’s Pro-Am a miss, turned up to Adare to face the music and the media while raising much-needed funds for those in need.

Ahead of this year’s anticipated sixth renewal, Woods was one of the first players to commit to the Pro-Am all the way back in 2018, ensuring golf’s biggest names would follow. And even through the uncertainty that’s ensued, most notably Woods’ ailing body still recovering from his car accident in February 2021, the now 46-year old’s commitment to the Limerick showpiece has been unwavering.

Why? We’ll let Woods himself answer that:

“JP is one of my dearest friends,” Woods said upon congratulating the McManus sponsored Limerick hurlers following their 2018 All-Ireland win.

“It’s cool his Limerick team finally won the title as I know how passionate he is about his hurling as well as his love of horse-racing and, of course, golf.

“I remember one year I was over for his Pro-Am and JP took me to a hurling match. I thought it was pretty neat but not a sport I would want to try (smiling).

“I try to keep in contact with him as much as our time allows but that’s great news for JP and Limerick and I’m really pleased for him as JP just does so much for sport in Ireland.

“I’m not sure when we’ll catch-up next but I do know I am looking forward to going back to Ireland for his Pro-Am at Adare Manor as it’s been a long time since we played the Pro-Am.

“It’s again right before The Open and I’ve always supported the event. It all sounds pretty exciting.”

Although Woods opted to skip June’s U.S. Open at Brookline, he’s ready to rick this week at the Pro-Am, as well as the following week’s 150th Open:

“I do hope and plan to be ready to play in Ireland at the JP McManus Pro-Am and the Open Championship next month. I’m excited to get back out there.”