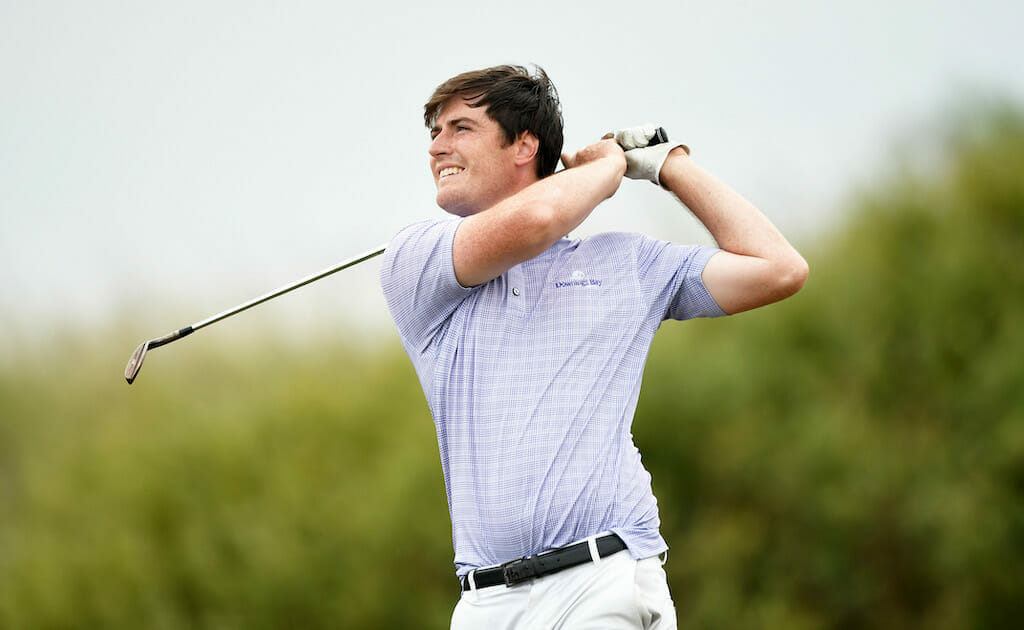 Fresh off just missing out on a place in The Open at Final Qualifying on Tuesday, Ballymena’s Dermot McElroy carried that momentum into the first round of The PDC Championship on the PGA EuroPro Tour.

The Northern Irishman carded five birdies – including two in his final three holes – and two bogeys in a three-under 69 on day one at Abridge Golf Club to sit in a share of 15th place, four shots back of leader Will Enefer.

The Englishman signed for an eagle, six birdies – five of which came back-to-back on his front nine – and a bogey in a seven-under 65 to hold a one-shot lead over Wales’ Jack Davidson, who also had an eagle in his 66.

McElroy, who is currently ninth in the Order of Merit and needs to break into the top-five in order to earn himself a Challenge Tour card for next season, is in a rich vein of form having finished just outside the top-10 at last week’s Blot Open de Bretagne on the Challenge Tour.

He is one shot ahead of Dundalk’s Daniel Mulligan, who had been three-under at the turn but only one bogey on his back nine meant he would settle for a two-under 70 and a share of 23rd.

Limerick’s Tim Rice and Whitehead’s John-Ross Galbraith are both just inside the cut line as it stands after one-under 71s, with Rice bouncing back nicely from an early double-bogey.

One man who did qualify for The Open, Galway’s Ronan Mullarney, is one of four Irishmen at level-par after a round of 72, with Youghal’s Conor Coyne – despite a triple-bogey on his card – Cork’s John Hickey and Daniel Brennan also at that score, one shot off the cut mark.

PGA Catalunya’s Luke Donnelly ended the first round at three-over-par, while Tullamore’s Stuart Grehan was five-over as he birdied two of the par-fives at Abridge and then played the other two in five-over.

Wexford’s Rhys Clarke had a quintuple-bogey nine among his scores as he finished a shot further back of Grehan at six-over, while Abridge’s own Dylan Brophy had a round to forget as he carded a 15-over 87.

Andrew Browne retired after 12 holes of his opening round when he was 12-over-par.