Tiger, “I’ve climbed my golfing Everest. It can only get better and flatter” 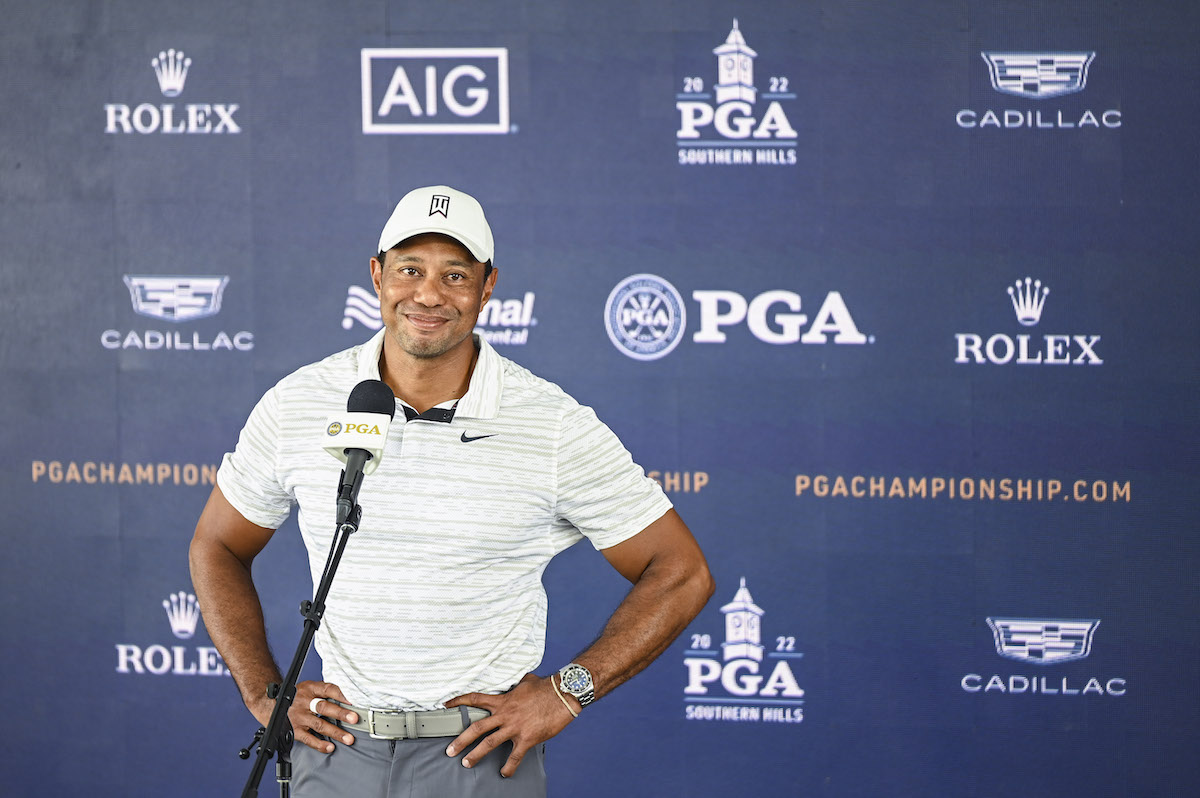 Tiger Woods smiles at a press conference during practice for the PGA Championship at Southern Hills Country Club on May 17, 2022, in Tulsa, Oklahoma. (Photo by Keyur Khamar/PGA TOUR via Getty Images)

Tiger Woods looks and sounds every bit confident declaring he’s climbed his golfing Everest and that it can only get better and flatter, and also 15-years on from his 2007 PGA Championship triumph at this week’s host Southern Hills course in Tulsa, Oklahoma

His fourth PGA Championship success win was a 13th of 15 major championship triumphs in Woods remarkable career and successfully defending the Rodman Wanamaker trophy by three shots for the first time in his career.

What’s more special in Woods teeing-up this week is not what took place a decade-and-a-half ago but what transpired just less that 40 days ago at Augusta National, and with Woods again silencing his skeptics not just teeing-up following his near fatal car crash of February 2021, but making the Masters halfway cut.

Now in returning to competition, and not just a regular PGA Tour event but a second straight major of 2022, we’ve learned just how much time off Woods had post his superb Masters showing.

One day! Yes, just one day.  That’s the ‘lull’, as Woods described it, since his 42nd place Augusta finish on the 10th April.

“Yeah, there was a huge lull, Monday (smiling) that was it”, said Woods.

That was it. Monday, it was not fun. It hurt. I had ice baths and was just trying to get the swelling out of there. Then we went back at it, leg day on Tuesday and we kept going from there. Said, let’s go.

“I figured the first mountain you climbed was Everest. That’s the steepest golf course you’re going to play and that was the first one you climbed it, and climbed. It’s going to get flatter and better. But still, I still have tough days, and things aren’t going to be as easy as people might think.

“Though I feel like I’m doing better. I’m having more days which are better, more positive. Able to practice a little bit longer. So, I’m able to do activities and things that I was hoping to do, and I’m finally able to do them”.

Woods faced the media mid-Tuesday morning local Tulsa time, standing tall and proud-like, with his hands for most of the 25 questions he faced, resting on his hips.  There were a couple of times he reached out to scratch his right leg but for the most part it was Woods looking every inch the champion he is.

Of course, Woods has played through the pain barrier many times before in his career, and while he reveals he’s still not anywhere near his best physically, mentally he knows he’s still a force for his rivals to deal with.

“My leg was hurting at the Masters but I pushed through it”, he said. “It was more mind than body. I said, I’ve won with a broken leg before. Keep on going out there, keep pushing.

“I also know how to play this golf course. If I can just putt well, you never know. Unfortunately, Saturday of the Masters, I think I had like 15 three-putts. But it was one of those things, the thing that I was frustrated with is it deteriorated as the week went on.

And Woods finds himself in a great three ball for the opening two rounds, grouped with Rory McIlroy and Jordan Spieth who finished second last week in his home city of Dallas and is looking to win the PGA Championship and become just the sixth player to win the Grand Slam