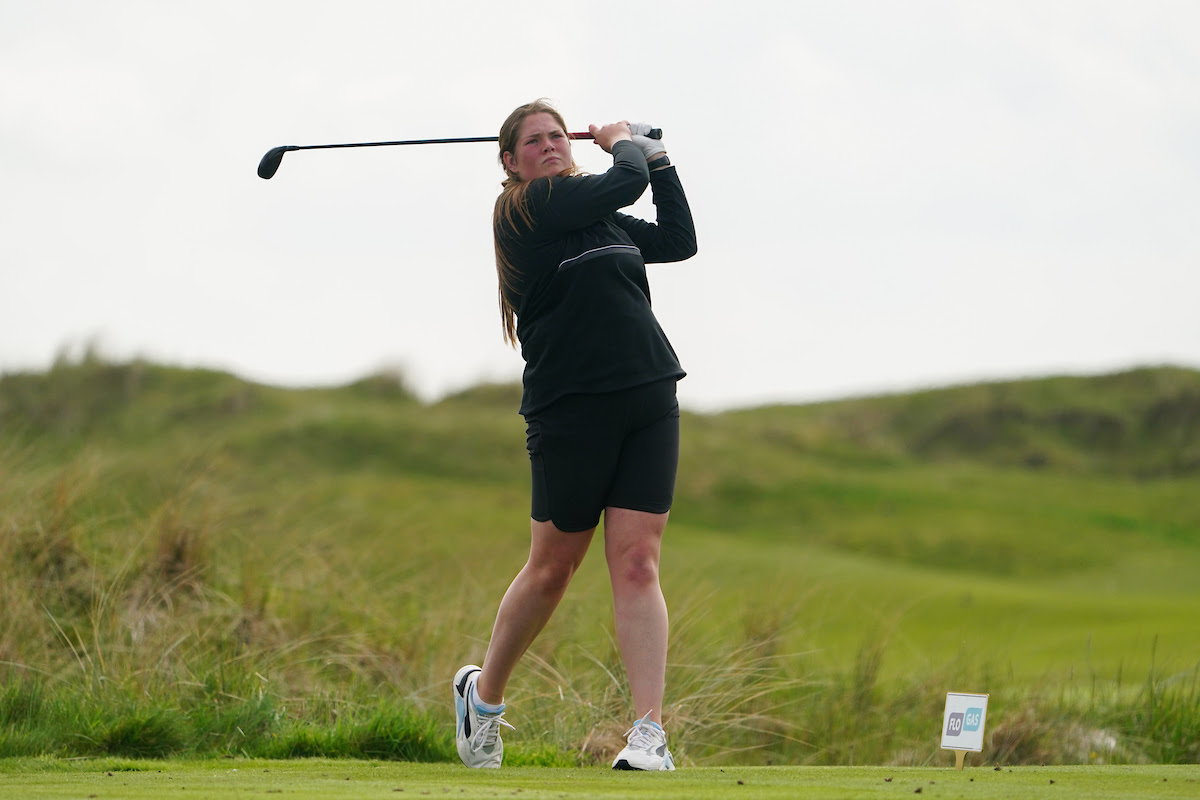 Katie Poots is just two shots behind Lorna McClymont heading into the final round of the Flogas Irish Women’s & Girls Amateur Open Championship after a sensational five-under 69 moved her to three-under for the week.

The Knock golfer carded two eagles on her front nine on her way to becoming the first player to shoot a round in the 60s this week at County Louth Golf Club.

Marina Joyce-Moreno (-2) and Ballybunion’s Emma O’Driscoll (level) are both perched inside the top-10 after rounds of 74 and 71 respectively.

An eagle on the ninth helped Spanish-based player Joyce-Moreno lie three adrift while O’Driscoll’s three-under round kept her within five at level-par.

The home charge will be led by Poots, and like her opening round she bogeyed the first and birdied the sixth but two eagles on the third and ninth catapulted her into contention.

The sixteen-year-old continued to take advantage of the favourable conditions on Saturday with birdies on 14 and 17 rounding off a clean back nine.

The bubbly teenager cut a saturated figure after bearing the brunt of the conditions on Friday morning but she was delighted to shoot a low score in the Baltray sunshine.

“The weather was a lot nicer,” she said. “I had my friends there to support me the last few holes on the way in and there was a bit of craic.

Scotland’s McClymont looked like she was going to put some clear daylight between herself and the chasing pack but two bogeys on the tenth and eighteenth bookended her back nine.

The R&A Student Tour Series winner roared to the turn in six-under 32 after birdies on the second, third, fifth, sixth, eighth and ninth.

It looked as if she was going to shoot the first round in the 60s this week but she was happy to settle for a four-under 70.

The Scot is the one to catch and she is hoping she can control her nerves and enjoy the day.

“Just trying to enjoy it and trying to keep it going and not let a bad round affect how the next day goes and keep my head high.

“I might feel a wee bit pressure but I will try put that aside and just enjoy tomorrow and whatever happens, happens and just see how it goes. Enjoying it is the main thing.”

England’s Millie Thompson is just one shot adrift in second place after a superb second round of four-under 70 to leave her on that mark. Thompson battled hard in her opening round with an eagle on the 18th bringing her to level-par and she took advantage of the favourable conditions on Saturday carding six birdies and two bogeys.

Despite being in prime position to launch an assault at the title on Sunday she felt disappointed that she couldn’t become the first player to shoot in the 60s.

“I played really well today but felt like I left some shots out there,” she said. “I’m really pleased with my round. This course really suits my eye and my game. I enjoy playing here and that helps getting low scores.

“Conditions were a lot better than yesterday. The wind was down and the sun was shining. It made playing off the tee especially far more manageable.” While there will be plenty of Irish interest in the final round the leaderboard is drizzled with some international flavour.

Sweden’s Iva Lindqvist and first-round leader Abbie Teasdale of Australia are both in a share of third place with Poots on three-under after rounds of 72 and 74 respectively.

Lindqvist is absolutely loving her time in Baltray and hopes to top off a great week with the trophy on Sunday evening. “I played really well today. I didn’t make any big mistakes, so I can only be happy.  “Tomorrow is just about playing my best. The course is in very good condition. It’s one of the best courses I’ve ever played.”

Conditions favoured low scores and Claudia Hastings took advantage with a three-under 71 to move alongside Joyce-Moreno. The Englishwoman made the cut here last year and she is hoping her course experience can help her in the final round. “The conditions were far calmer today, so it was all about trying to take advantage of that. I played really well.

“I’m really happy with where I am on the leaderboard going into tomorrow. It’s all about playing steady golf like I did today. I made the cut last year. It really suits my eye.”

Just eight players are under-par after 36 holes and the halfway cut fell at ten-over with Castlewarden’s Clodagh Walsh making it on the mark after a one-under 73.