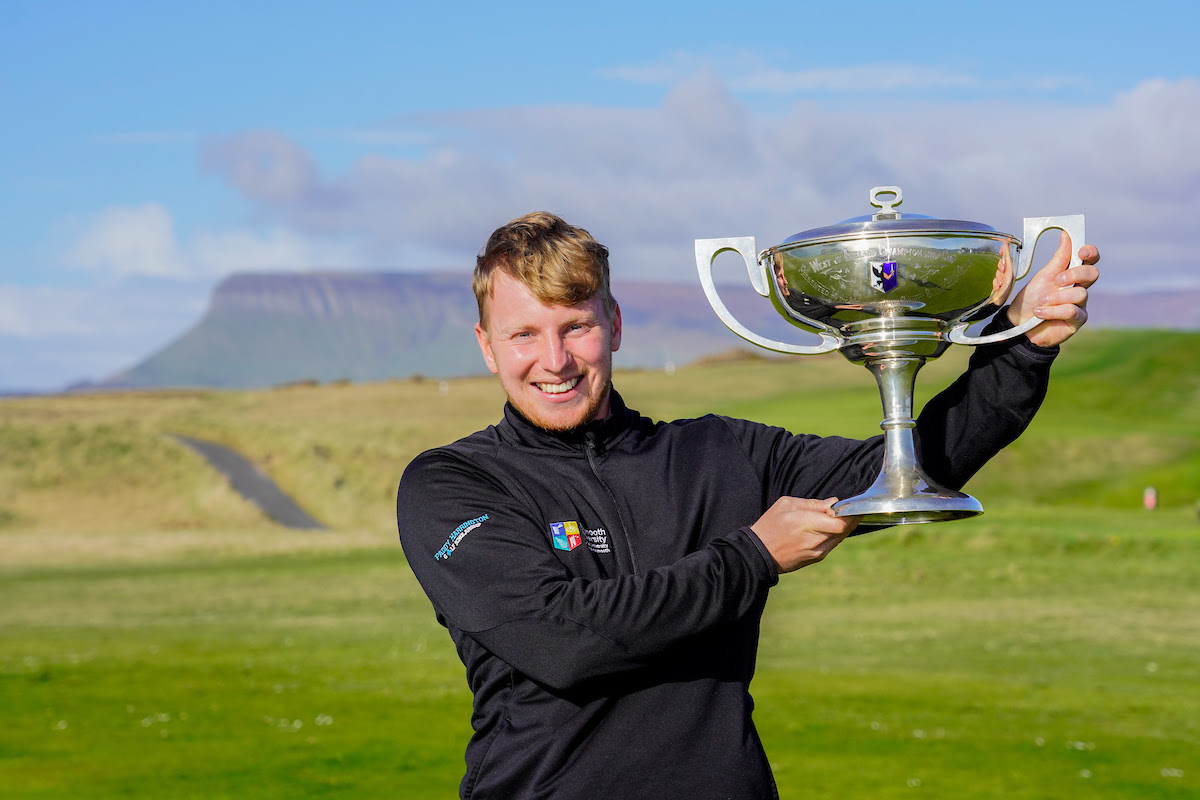 Fahy held a series of putts when he really needed to down the stretch to keep Nolan at bay after he put on a late charge to try and become the first Connacht club winner since Galway’s Joe Lyons in 2007.

Having been beaten in the final of the South of Ireland to Rosses Point’s own TJ Ford last year, the Wicklow man couldn’t hide his delight in adding his name to the famous roll of honour. The 24-year-old joins Pádraig Harrington, Shane Lowry and Rory McIlroy on the illustrious list in the clubhouse.

“It hasn’t really sunk in yet I was so focused the whole day. I still haven’t taken it in. I came close in the South last year so to win one of the championships is great,” he said.

“It’s great. It’s crazy. It was only when I lost in the final of the south I was thinking what a good opportunity I had let slip. Then I hadn’t been playing great and I was like jeez, wondering when I would be competing like that again. So I am delighted my hard work has paid off. I have put in a lot of hard work over the last few months and I didn’t really see results. I just stayed patient really. Sometimes it pays off and you just have to stick with it.

“I definitely felt way more comfortable today. Last year I hit a few wayward drives early on so I was really focused. I was a bit careless in my attitude in the south thinking OK, I’ve got the final now, let’s go out and enjoy it, I’ve already had a good week.

“But today I definitely pushed on and I got the head down a lot more and didn’t even think about winning all day. I was really good I just focusing on one shot the time and that’s what I do really well today,” he added.

The match was won on the greens, Fahy birdied the 15th, held a 15-footer for a half on the 16th and two-putted from 45-feet on the 17th before Nolan, unfortunately, three-putted the same hole.

“I hadn’t really holed any putts during the week,” Fahy admitted. “I’ve been putting pretty poor all week so to get the clutch ones on the way in was a nice alright. I was just hanging in there. It literally could’ve gone either way coming down the stretch.

“That’s the story of my life missing those short ones. But to come back like that was great. I knew Liam would wouldn’t let up at all. I knew he would finish strong so it was great to played solid golf down the stretch.”

The match was nip and tuck on the front nine, Fahy fell 1 down after he dropped a shot on the 2nd but levelled matters on the 6th after holing an eight-footer for a half on the previous hole.

The Maynooth University student landed the first punch of the day with a 20-foot birdie on the 7th to go 1UP and could have extended his advantage but passed up good opportunities on the 8th and 10th.

“That putt on seven was massive,” said Fahy. “That kind of gave me a bit of confidence on the greens.”

Holes 11 and 12 were halved before a three-putt from Nolan extended Fahy’s advantage to 2 holes with five to play.

They say “two up with five to play never wins,” and Fahy showed his first sign of any potential nerves with the finish line in sight. A clumsy three-putt bogey from just short of the 14th halved the deficit.

All of a sudden Nolan roared on by a buoyant Connacht crowd had a pep in his step for the first time in the match and after he stitched a wedge to two-feet he looked destined to level the tie.

However, Fahy had other ideas. After a frustrating day on the greens, he held a 12-footer for his birdie on 15 to keep his nose in front and after pulling his tee shot left on 16 he came up trumps again with the flat stick to stay one ahead with just two holes to play.

“Massive. I knew he was going to hole that on 15. So I had to make him putt out, just in case but then to hole out on 15 and 16 –  if I hadn’t holed them he could be standing here talking to you. So hats off to him. He played well all day and it was actually a great match. It was nip and took all day.”

Nolan found the heart of the 17th fairway and after Fahy pulled his drive down into the gulley the advantage seemed to be with the NUIG student again.

Fahy who studied geography in Maynooth University found the middle of the penultimate green while Nolan had 20-feet for a birdie to draw level. Fahy held a six-foot putt for his par and Nolan dragged his putt for the half left from three feet.

“I was trying to rip one down the centre and I just pulled it a little. I was hoping to get down to the bottom to make it easier. It was actually grand there’s not much rough there at all, you need to get very unlucky to get a bad lie, you’ll have a second shot to the green here most of the time. It was still only a wedge in from there.

“I still wasn’t putting great mid round but it was only those last few puts on 15 and 16 because I had missed a few, I never really felt confident over any of them. Even that one on 17, I was kind of a bit shaky on it but I put a good stroke on it, it was great.

“Conor Ryan is a good friend of mine and I play a lot of golf with him and he’s always slagging me about coming in clutch on the greens so I don’t know what it is probably just mentality over those putts and focusing a lot more and just accepting if I miss, I miss just as long as I put a good stroke on it and not worry about the result,” he smiled.

Fahy was level-par for the seventeen holes while Nolan was three-over and the Irish international will head back to Bray with the trophy as the 99th winner of this championship and he leads the Bridgestone Order of Merit.