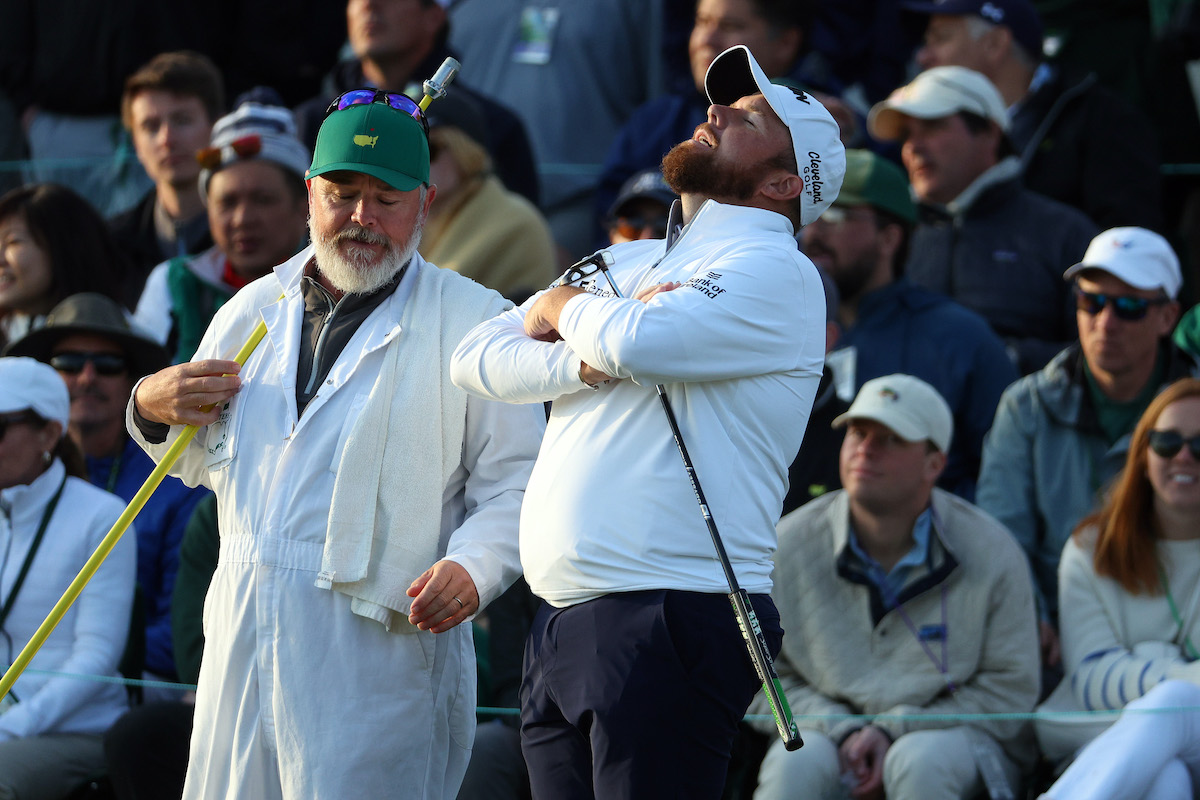 Shane Lowry and caddie Bo Martin react on the 18th green during the third round of the Masters at Augusta National Golf Club on April 09, 2022 in Augusta, Georgia. (Photo by Andrew Redington/Getty Images)

Despite sitting in a tie for 4th and being one of only seven players under par after three rounds around Augusta National, Shane Lowry left Magnolia Lane bitterly disappointed after returning a moving day 73.

It was a tale of two halves for Lowry who got off to the best possible start in bitterly cold and windy conditions. A birdie on the second was swiftly followed by another on the sixth as the 2019 Open Champion looked to close the gap to overnight leader Scottie Scheffler.

It seemed his eye was in and momentum was with the Clara man as birdie on the second was followed by another on the 6th. Then a 30-footer for birdie just burned the edge on the Par-5 eighth and Lowry proceeded to hit a perfect drive down the ninth leaving just 99 yards to the hole, but then the cracks began to appear.

A miscued approach spun back from the front of the green and with it came Lowry’s first drop shot in 25 holes. As the roars echoed through the pines from the groups behind It was clear Scheffler was pulling away. The ninth was a momentum killer and Lowry knew it.

“I just hit a few bad shots. Like 9, geez, I was bouncing like I was feeling great about my game. Honestly, 1st tee, no nerves, nothing. Felt so comfortable out there, and that just seemed to kill all my momentum that I had.”

“I had  just lipped out on 8 for birdie, feeling really good, and 99 yards to the flag, I mean, most stupidest shot I’ve hit in a while. You just can’t do that if you want to win tournaments like this.”

The bogey at nine was followed by another at 13 where Lowry vented at caddie Bo Martin about an approach number and proceeded to three putt as his frustrations boiled over. Another dropped shot followed with a bad approach to the 17th as Lowry came home in 38 strokes.

“I don’t even know what to say. I’m disappointed in myself for that last ten holes that I just had. Yeah, I’ve just got to pick myself up and go again tomorrow.”

At two-under-par, Lowry is tied for fourth with Charl Schwartzel and will again tee it up with Sungjae Im in the penultimate group just behind the leading duo of Scottie Scheffler and Australian Cameron Smith.

Despite being seven back, Lowry was trying to remain positive knowing a lot can happen on Sunday at the Masters. With lighter winds and higher temperatures forecast he knows he will need to go low on Sunday.

“I was quite bullish about my game going out there today and felt ready to take on Scottie and I just didn’t do it. The last ten holes just weren’t good enough, and it’s unfortunate.”

“Look, I’ve never been in this position at Augusta, so it’s the first time for me. I’m happy with that this week, that I am up there this week.”

Rory McIlroy will go into the final round tied for ninth on one-over after his third round 71, 10 shots behind Scheffler on one-over-par as he partners Collin Morikawa. Séamus Power’s third successive 74 left him 15 shots off the lead on six-over and paired with Marc Leishman for the final day.