Training Day – Harrington & Power getting to grips with Augusta 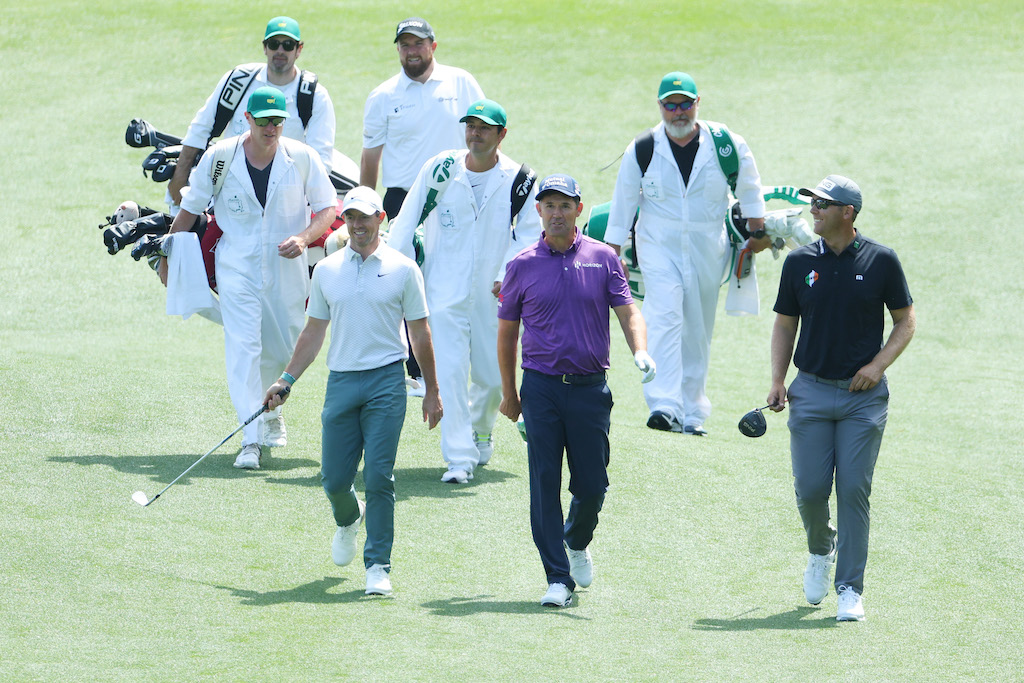 Every day’s a learning day at Augusta National, whether you’re 50-year old three-time Major winner Padraig Harrington, who this year makes his 16th Masters appearance, or Seamus Power, making his first drive up Magnolia Lane for perhaps the most famous tournament in golf.

The Rio Olympic teammates took to the course on Monday afternoon for a full Irish fourball, joined by Shane Lowry and Rory McIlroy for 9-holes of practice. Power had already played in the morning with Talor Gooch and Billy Horschel, eager to maximise his repetitions around the Cathedral in the Pines, a parkland paradise that reveals itself that bit more each time you play it.

Indeed, Augusta National has long been known as a ‘horses for courses’ venue. Its subtleties are more intricate than most and although it’s been a crash-course study session so far this week for the West Waterford man, Power is thirsty for knowledge, and from what he’s seen since Sunday, he believes Augusta’s green complexes hold the key.

“I think the secret is going to be around the greens,” Power said. “That’s what I’ve seen so far. I played nine holes with Billy Horschel and Gooch, who have been around here plenty of times, and just getting little bits of advice from them.

“It’s just when you’re out of position, where to hit it, where you have a chance of getting up and down. That’s what I’m trying to learn, obviously having not played here before.

“It’s going to be a challenge. There’s going to be pin positions I’ve never seen before, and I’m sure the conditions are going to change a lot as the week goes on. So, it’s going to be adjusting on the fly and talking it out with Simon [Keelan – caddie] and seeing the best we can do.”

If Power was feeling overwhelmed by information overload since arriving to the Georgia gem, he would’ve felt heartened playing alongside Harrington who returned to Augusta for the first time since a missed cut in 2015 just as eager to learn.

“There’s a couple of changes, but there’s just a lot of shots you’d like to practice and play here,” said the Dubliner.

“You’re trying to cover all bases, but every hole is several shots that you’d like to practice, several different pin positions, and you realise that there isn’t enough time in the week and there’s no point in tiring yourself out.”

Instead, it’s all about preparing smart, though if Tuesday’s stormy forecast comes to fruition, then there’ll be little time for on-course practice again until the eve of the tournament anyway.

Harrington is no stranger to Augusta’s evolution, but he’s also well aware of the quality Power possesses. From relative obscurity outside the top-450 in the world rankings 12 months ago, Power has climbed to 41st ahead of his Major championship debut. That in itself presents a tall task for the 35-year old. Add in his Augusta inexperience and the task is taller still, but Harrington knows his compatriot has the physical game to compete this week. For the former Ryder Cup skipper, it’s all about believing you can do it.

“Séamus is a great player,” Harrington said. “The last year has been great for him. He’s believed in himself more, turned that corner, and he’s now very comfortable out there and contending regularly.

“I think it will be a lot to ask in his first Major – certainly his first Masters – to win it, but he has got to think like he can do that. He’s got a good game. It’s just believing you belong.”

Harrington has forged one of the great golf careers combining an enviable work ethic with a formidable mentality. He boasts three top-10’s around Augusta, including a T8 finish more recently in 2012. Having qualified by virtue of his T4 at last year’s PGA Championship, and off the back of an encouraging tied-second at last week’s Champions Tour event, Harrington is convinced he has enough retained ability to get himself into contention on Sunday. Much like with Power, and this curious game as a whole, he says it will be the six inches between his years that decide his destiny.

“Tough golf courses don’t mind me. It’s the physicality — I have a bit of a knee injury, so that’s a little bit of an issue for me. If I mind myself, I should be okay.”

Harrington’s not the only man minding a leg injury this week in Georgia. All eyes have been on five-time Masters champion Tiger Woods who looks set to defy logic and take his place in Thursday’s starting field. Harrington and Woods have shared many a fairway through the years and they share a winner’s mentality too, with Harrington insisting that Tiger’s not teeing it up to simply smell the azaleas.

“Look, what’s impressive is Tiger won’t play here unless he thinks he can win,” Harrington said. “He’s not coming to wave at the crowds. He’s coming to try and win the tournament. It looks like he’ll tee it up, and if he does, he feels like he can win, and that’s impressive.”