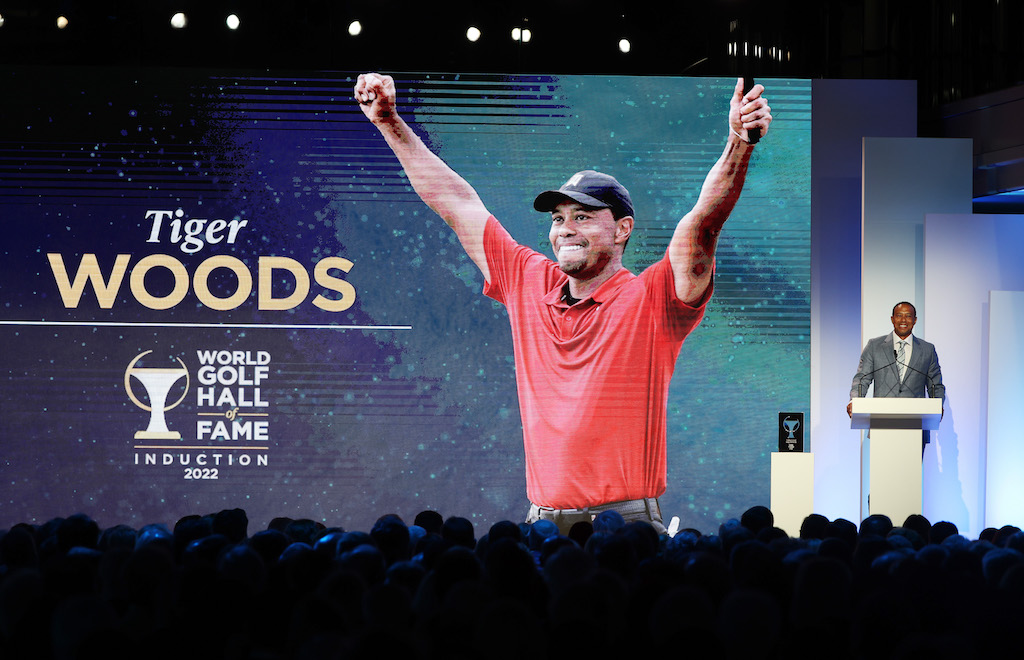 It was inevitable, but Tiger Woods has officially been inducted into the World Golf Hall of Fame.

Unsurprisingly, it was Woods who bore the brunt of the spotlight on the night at PGA Tour HQ where the 46-year old found himself inducted further into golfing lore by his 14-year old daughter Sam, who admitted she had inducted Tiger into “the Dad Hall of Fame a long time ago”.

Indeed, Sam pulled at Woods’ heartstrings in an emotional introduction, citing Woods’ near fatal crash a year ago and the worries of the family waiting for their dad to come home.

“We didn’t know if you’d come home with two legs or not. This is why you deserve this, because you’re a fighter,” she said.

“You’ve defied the odds every time, being the first Black and Asian golfer to win a major, being able to win your fifth Masters after multiple back surgeries, and being able to walk just a few months after your crash.”

All bets were suddenly off as Woods took to the stage.

“I just lost a bet to [Steve] Stricker that I wouldn’t cry,” he said, with Woods’ speech going for 17-minutes, seemingly off the cuff and ten minutes over the allotted time.

.@TigerWoods tears up as he reflects on the moment his family risked everything for him.@GolfHallofFame pic.twitter.com/bso9xge7hM

Woods’ speech was a modest one, highlighting the efforts of those around him in elevating him to where he stands today.

“Without the sacrifices of Mom who took me to all those junior golf tournaments, and Dad, who’s not here, but who instilled in me this work ethic to fight for what I believe in, chase after my dreams, nothing’s ever going to be given to you, everything’s going to be earned,” Woods said.

Woods made no mention of his Major wins, or his 82 PGA Tour victories, with the focus firmly on those around him for the entirety of his speech.

“I know that golf is an individual sport. We do things on our own a lot for hours on end, but in my case, I didn’t get here alone,” he said.

“I had unbelievable parents, mentors, friends, who allowed me and supported me in the toughest times and the darkest of times, and celebrated the highest of times.

“I just want to say thank you to my mom, Sam, Erica [Herman, his girlfriend], Charlie, everyone here, all my friends that have come to be here.

“All of you allowed me to get here. I just want to say thank you very much from the bottom of my heart.”

Yet for all the support systems, Woods the individual was always special, always different, and perhaps highlighted best by arguably the line of the speech that encapsulated what made this junior phenom so unique. Recalling his younger days rocking up to the golf course, Woods would arrive armed with two simple questions.

“Where’s the first tee, and what’s the course record?”