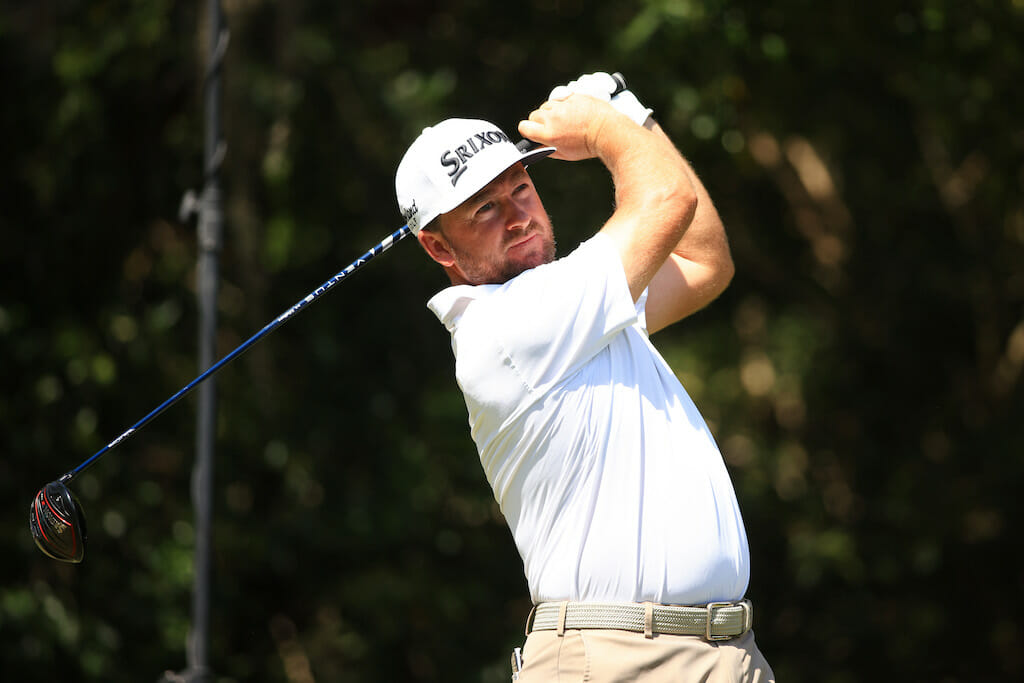 Graeme McDowell may be eight shots off the final round lead but he is relishing the opportunity a forecast of a return to strong winds and rain may present over the final day of the Bermuda Championship.

McDowell looked to have found one of the shortest routes on the largest of the 181 islands that make-up the Bermuda group in racing to four-under par through seven holes but then stalling to complete the remaining 11 holes in level par.

It handed McDowell a second straight four-under par 67 to move him to nine-under and eight shots adrift of Canadian Taylor Pendrith, officially on his honeymoon, who superbly added a six-under par 65 to move three shots clear of the field at 17-under par.

Pendrith, 30, has won twice on the Canada PGA Tour and is now eyeing a wedding gift of a two-year PGA Tour exemption along with a maiden Masters invitation next April.

New Zealander Danny Lee, with a 65, is in second place at 14-under par, one shot clear of Aussie and reigning Irish Open champion, Lucas Herbert signing for a second straight 65 and lying on 13-under.

‘GMac’ soon made his presence felt with four birdies in a five-hole stretch from the second to seventh holes. The Lake Nona resident birdied the second, fourth, fifth and seventh holes and then headed to the turn among the leading six at nine-under. He moved into double figures at 10-under par with a fifth birdie of his round and the 15th birdie of his championship to be then just three off the lead.

There was just the one bogey on McDowell’s card and that came at the par-3 16th when his tee shot was short of the green and on a slope in front of the ‘dance floor’ from where his second flew the flag and ended-up on the fringe way at the back of the green. He two-putted for a ‘4’ though the PGA Tour scoring for some minutes posted a par ‘3’ on their website ahead of the correction.

More frustration for McDowell at the uphill par-5 17th after playing his third shot from a bunker short right of the green, his birdie putt stopped right on the lip of the hole and with McDowell extending his right arm as if to say: “What was that all about?”

McDowell, who leads the field in ‘Driving Accuracy’ ended with a par to be headed to day four sharing 10th place. Speaking afterwards of the earlier tee-times, and in an effort to avoid the worst of the expected strong winds and wet conditions, he hopes it may now play into his hands.

“Tomorrow’s weather is predicted to be much like Thursday morning’s weather and it gives me a fantastic opportunity so it’s nice to be in and around the leaderboard on the weekend,” he said.  “It’s the confidence and momentum I am looking for in my game and look forward to getting back out there tomorrow.”

And when it was mentioned that McDowell may indeed relish the predicted poor afternoon weather, he reminded us it’s not all about being born Irish.

“Guys look at me and think that I must enjoy this weather more than they do, being the Irish guy in the field (smiling),” he said.

“I don’t think I enjoy it necessarily but I do think my game is suited to it. It’s weird. It’s like today I tried to get my normal game back with the normal flights and normal swings but then tomorrow we have to re-engage the low ball again. It will mean a lot of half and three-quarter ball flights and using the range to get the ball flight under control ahead of getting ready for the golf course.

“I am looking forward to the challenge, obviously.   am going to be four or five shots back but that is the kind of day you can make those types of shots up because if we had another day like today, there is no way I could come from five or six back.  So, if it’s a tough day we can obviously do that.

“I feel like all facets of my game are in good shape.  This is a fun golf course where you have to be in place off the tee because the rough is kind of jumpy and it’s tough to control your ball.

The now 42-year-old McDowell will look to become the second-straight over-40-year-old to win in Bermuda after American Brian Gay, aged 48, last year ended a near nine-year winless drought.

A McDowell success would be a fourth PGA Tour victory and a 17th pro win worldwide.

Seamus Power, who had been grouped with McDowell over the first two rounds in what was a first for both on the Tour, birdied the second and seventh holes and after a bogey on eight, he regrouped with birdies at the 10th and 12th holes.

He then dropped shots at 13 and the last in a second straight round of 70 to move to six-under par and just outside the top-30.