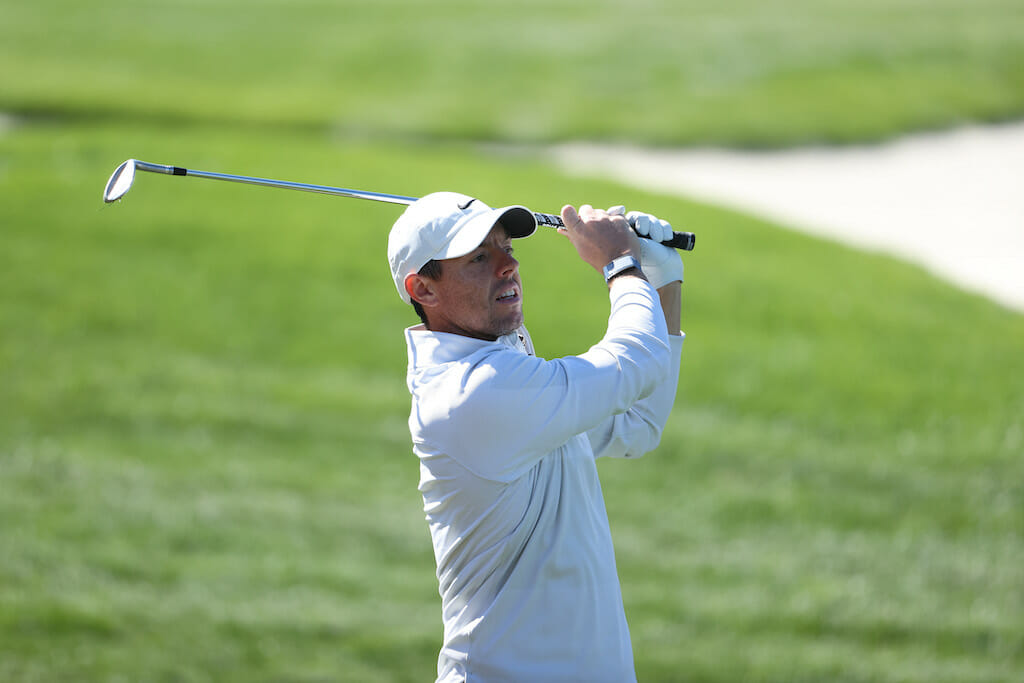 A Rory McIlroy late round eagle had him soaring near the lead only for the Irishman to horribly drop three shots at the penultimate hole on day one of the CJ Cup in Las Vegas.

McIlroy’s first event since last month’s Ryder Cup and his opening tournament of the new 2021/22 wraparound PGA Tour season was highlighted by a 24-footer for a ‘3’ at the par-5 14th hole on the Summit course.

The current World No. 14 then birdied the 15th to move to six-under for his round only to give three shots back after first leaking his drive way right down the par-4 17th before taking a swipe at a recovery, then a penalty and finding a greenside bunker in four before taking three shots to get down for a triple bogey ‘7’.

Then in a reflection of the frustrating nature of his day’s work seemingly undone, McIlroy drilled a 343-yard drive down the last and then two-putted from just under 50-feet for a birdie ‘4’ in a bitter-sweet four-under par round of 68.

McIlroy had been as high as sharing seventh following his heroics on 14 but now sits in a tie for 26th at the €8.4m event.

“It’s one of those courses where if you just keep it in play, it’s obviously very scorable, but you hit a couple just offline and you get a bad break or a little unlucky, you can make a big number and I did that on 17, but the other 17 holes were good.

“It was good to birdie the last and I think it helps my confidence just with how I hit it all day. I missed a couple of drives, but I hit my irons really well, I putted well, so I did a really good job of just trusting my reads and having acceptance whether the ball went in or not. It added up to a good putting round and nearly a really good round overall just apart from the blemish on 17, but still a good day.”

Fellow Irishman Shane Lowry was struggling early to be two-over through just three holes but managed to get both shots back with birdies on five and six ahead of a third bogey of his round at the ninth.

Lowry headed into the inward nine dropping a further shot on 11 but then holed a six-footer at 14 ahead of four closing pars in his score of a one-over par 73 that leaves him sharing 70th in the 78-man field.

That’s a full 12 shots behind American Robert Streb who signed for a remarkable 11-under par 61 to lead in Vegas. Streb had the golf world on notice after playing his first six holes in an astounding seven-under par before mercifully slowly down slightly and signing for 61, leaving him one clear of compatriot Keith Mitchell.

“Very happy – I guess it’s unchartered for me out here,” Streb said of his career-low round that even included a bogey.

“Yeah, it was going really well. Obviously hit a few close and the putts were going in. I’ve never had a start like that, so it was kind of fun. Slowed down a little I guess in the middle, but it was a really, really good round.”

“I was trying to stay in the moment as best I can and, I don’t know, you just feel like you can start aiming at stuff,” he said. “Things seemed to be going my way. Even that bogey, I almost made the putt, so it just went really well.”

European Ryder Cup teammates Sergio Garcia and Viktor Hovland are in the group at seven-under par and in a tie for fourth, four shots back.