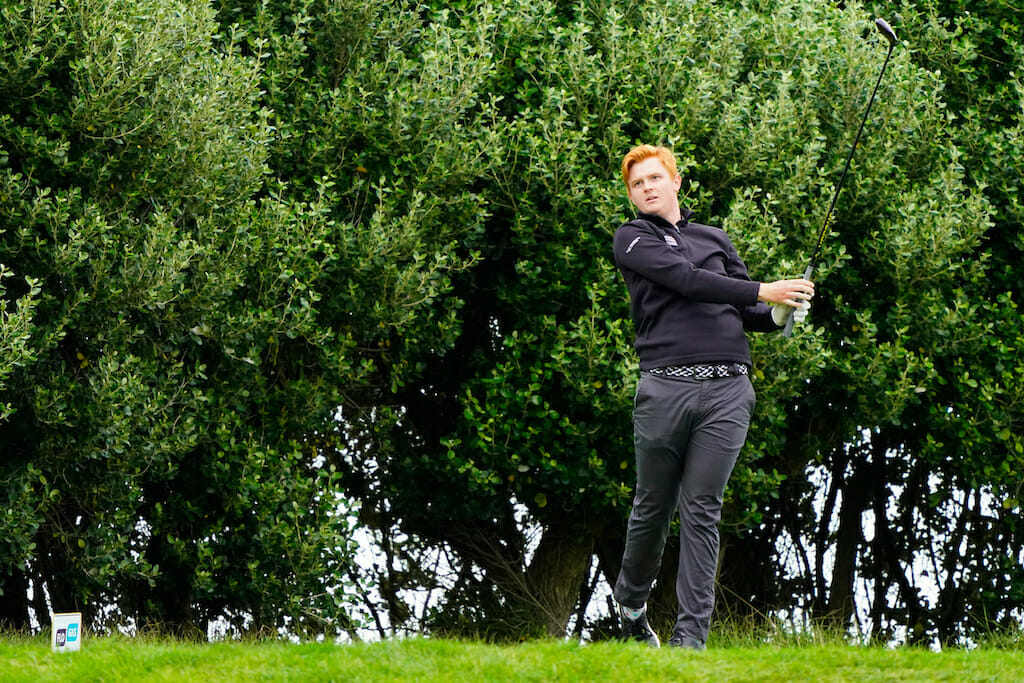 Athenry’s Allan Hill was the only man to break 70 and takes a one shot lead into the second round of the Flogas Irish Men’s Amateur Open at The European Club.

The NUI Maynooth student lies on -2 and made three birdies on the back nine, including a lengthy putt on 18 to lead by one from a group of three. Letterkenny’s Cian Harkin, Switzerland’s Cedric Gugler and Scotland’s Ruben Lindsay were the only other players to end Friday’s play under par.

“It was playing tricky out there,” the 21-year-old Hill said after his round. “I made a three-putt on six. Bar that, I thought I played very solidly all day. It’s a fresh day tomorrow. It’s all about trying to do the same thing as I did today.”

Cian Harkin entered the competition as a Reserve, but he lies only one-shot behind Hill on -1. The Letterkenny golfer was surprised to find himself in contention.

“Preparations weren’t great. I’m back in college and haven’t been practicing much. After getting in on the Reserve List I was just happy to be here,” said Harkin.

“I stayed calm throughout. I made a few putts and did all I could to stay out of the rough all day. It’s all about hitting fairways and greens out there.  I’ve proven myself to the boys at home today. Sometimes I wonder if they think ‘is he good enough?’ To see my name near the top of the leaderboard is a dream come through.”

Despite a double-bogey on 18, Scotland’s Ruben Lindsay is only a shot back,and hopeful of a strong final two rounds.

“It’s my first tournament round in a while. I’m delighted with how I played today. I holed a few putts. It’s been a solid day,” he said.

“It was nice to get back out there today, and feel a bit of pressure. Today was all about not playing myself out of contention.”

Switzerland’s Cedric Gugler was out in the second group of the day and stayed at the top of the leaderboard throughout. The Zurich golfer hopes he can build on a strong start.

“I played solid golf today. I made no big mistakes. My long game was good. I’m pretty happy,” said Gugler.

“I like playing on Links golf. We don’t have these courses in Switzerland obviously, but I’m really happy to shoot a good score today.”

Roscommon’s Thomas Higgins lies on level par, with a group of seven including Malone’s Matt McClean and Galway’s Joe Lyons on +1.