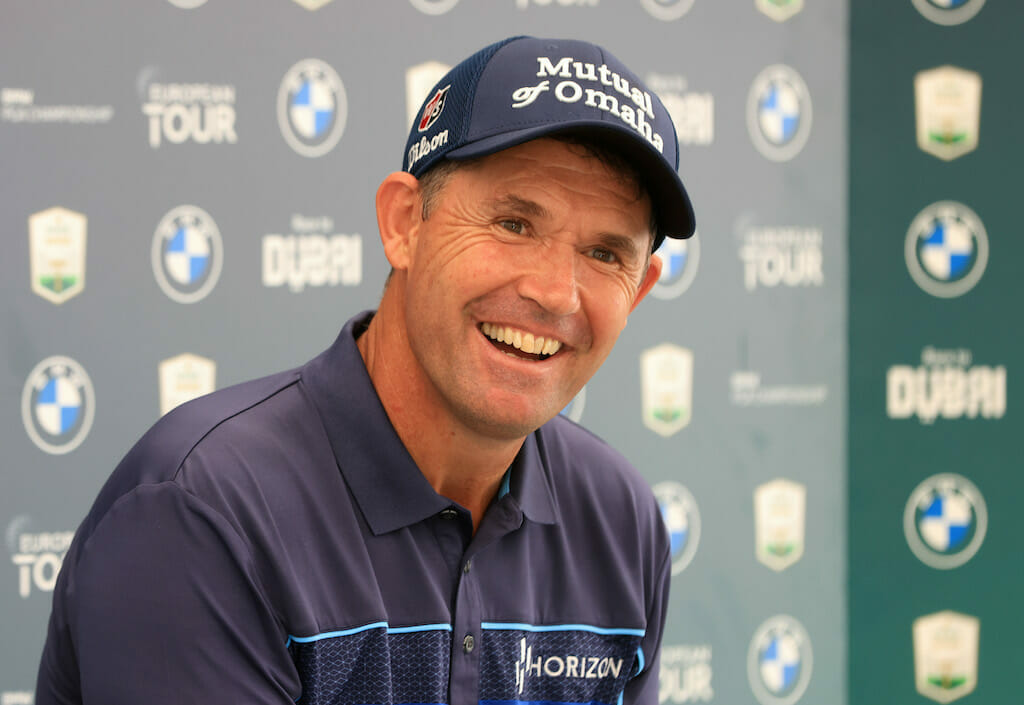 The following is taken from PGATOUR.com‘s Q&A with Padraig Harrington:

PGATOUR.COM: What’s the once facet of your game that is most responsible for your success?

PADRAIG HARRINGTON: Oh, my mental game, followed by my short game. Chipping. Not necessarily putting, but chipping. I was always a demon bunker player. But my mental game would be my No. 1 trait.

PGATOUR.COM: You made two double-bogeys in the last round of The Honda Classic in 2015 and won. It was the first time anybody had done that on the PGA TOUR in 11 years. Does that sum you up as a player?

PH: That does sum me up; I’m stubborn and pig-headed, and if you gave me a superstition, I’d want to prove the superstition wrong. If you think I’m out of it, that makes me more dangerous.

PGATOUR.COM: You grew up the youngest of five boys. Is that what toughened you up?

PH: You’d have to think so. We’re a competitive family. The brother just older than me, 20 months older, everything I did was to compete against him and beat him. Fergal. If I treated him as my equal, that pushed me on. Golf. Cards. Snooker. Anything. It was competitive. All four of my older brothers started working when they were 13. They all took jobs in bars, cleaning tables, you would call it a busboy. Because of the money they earned trickling down into the family, I didn’t work. I got to play golf as a teenager. I got the opportunities.

PGATOUR.COM: What artefacts from your career are on display at Stackstown G.C. in Dublin?

PH: There’s an Open trophy, a replica. There’s a replica of the PGA trophy. And a lot of personal stuff from when I was an amateur all the way through. Some nice stuff. I must update it now. It was a serious party club. Legendary drinking and partying and card games and golf games.

PGATOUR.COM: How old were you when you won the club championship?

PH: There was one guy with a lower handicap than me, but by 14 or 15 I was the best player there.

PGATOUR.COM: What’s the one facet that held you back in your career?

PH: Too much practice on the range, not enough time on the course. I didn’t have a range when I was a kid; I had 100 yards to practice. Once I got on TOUR, it was the draw of trying to hit the next shot better. Unfortunately, I’m a really good range player.

PGATOUR.COM: What do expect from playing PGA TOUR Champions?

PH: I’m fascinated with how environments change the same person, so I’m curious to see how I change out here, and how this environment changes me if I go back to playing PGA TOUR, European Tour. Does coming out here into a smaller pond make me feel bigger and better, and then can I carry that back to the PGA TOUR and the majors?

PGATOUR.COM: What do you make of Rory McIlroy? He changed coaches, won the Wells Fargo Championship, but it seemed like an odd season.

PH: Yeah, but every player evolves. You’re never the same player. Clearly the field has caught up with Rory. He had a driving advantage and now there are lots of guys who are up there with him. So, in some ways he’s searching for a different advantage.

PGATOUR.COM: Other than Tiger, who is in a class by himself, have you ever seen such excitement as there was after McIlroy won the 2011 U.S. Open at Congressional?

PH: That and the PGA Championship. Because he did it with the driving. Here was this small guy who just hit it like nobody else. I remember Phil saying at Abu Dhabi around that time, like, how could you compete against him, where he hit it off the tee? Rory was a great player all the way through, but the driving put him over the top. His attitude, his youth – in some ways Viktor Hovland reminds me of him. Nothing like a bit of innocence.

PGATOUR.COM: Greatest round you’ve ever played?

PH: The last round (of The Open Championship) at Birkdale, 2008. I swung the club well, hit some incredible shots. There was no drama. All my other wins, you kind of look back on and go, I recovered here, I saved myself here. Winning (the PGA Championship three weeks later) at Oakland Hills was completely different. I got sick. I lost my swing and couldn’t get it back. That was pure tenaciousness.

PGATOUR.COM: How did you get sick?

PH: I got dehydration, not because I wasn’t drinking but because of the hype from The Open coming into that PGA. On the 36th hole I missed the green by 80 yards with a 4-iron. I missed by 80 yards off the tee on a par 4 before that. I would not have made the cut if there was one more hole to go; I had lost all coordination. It was the rain delay the next day that let me back into that tournament. It gave me an extra 24 hours to get myself together. I made the cut on the mark and shot 66-66.

PGATOUR.COM: If you could have one career mulligan, where would it be?

PH: The last three holes at (the 2006 U.S. Open at) Winged Foot. I had three pars to win, and hit three good tee shots, and went bogey, bogey, bogey. I bogeyed 16 and panicked. I thought I needed to make birdies. But Winged Foot won me Carnoustie, Birkdale and Oakland Hills. Because I needed the experience of Winged Foot to realise what it was like to have a tournament, a major, that was within my grasp. I learned a huge amount.

PH: I bogeyed the last at Olympic Club (to tie for fourth at the 2012 U.S. Open). I needed birdie but was maybe a foot short of being on the upslope for my approach, and from the downslope I hit it long-left into the bunker. I was leadin’ after 59 holes at The Open in 2015 and lost a ball in the gorse; everybody knew where it was, nobody told me. The cameras knew. I was lookin’ in the wrong place. I’d turn on my phone now and ring someone.

PH: The U.S. Open is my best major. It suits me. I’ve done nicely in it and feel very competitive. I haven’t played in it in 10 years or something, but you need a lot of resilience to win on a U.S. Open golf course. I would like to have a few more goes at that one.

PGATOUR.COM: You had four top-10s at the Masters.

PH: I couldn’t care less about top-10s, but I could tell you where I had a chance of winning and felt nervous, and that’s the most important thing. I had two Masters where, had I shot 31 or 32 on the back nine … One year (in 2007) I hit the most perfect hybrid into 15 and it pitched five yards onto the green and rolled back off the front and in the water. I thought I holed the shot. It was ridiculous. They changed the green the following year. Now they have a pin position where my ball landed, that’s how much they changed it.

PGATOUR.COM: You weren’t just aiming for a nice finish.

PH: I knew I needed to make eagle to have a chance. When you feel nervous, that qualifies as a good week.