Mickelson among those to question “stupid” 46-inch rule 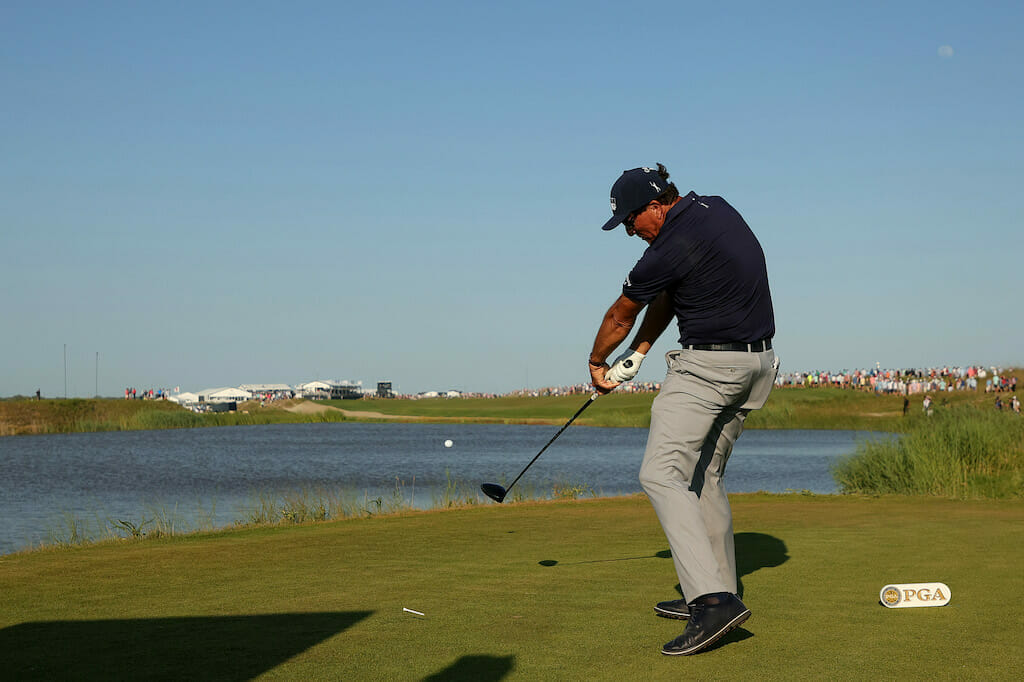 Phil Mickelson used a Forrest Gump quote to sum up his feelings towards the new 46-inch club-length restriction being introduced by the R&A and USGA – “Stupid is as stupid does”.

Mickelson slammed the game’s governing bodies in August when the anticipated ruling was first mooted in the media and now he hasn’t held back, believing that the new local rule, which excludes putters and is set to take effect from January first, does absolutely nothing to grow the game to a wider audience.

It is extremely disappointing to find out that the PGA Tour adopted the new USGA rule through the media. I don’t know of any player who had any say or any kind of representation in this matter. 🤔 I do know many are wondering if there’s a better way.

“Stupid is as stupid does, Mrs Gump,” Mickelson Tweeted. “Really though, are the amateurs trying their best to govern the professional game the stupid ones? Or the professionals for letting them?”

The distance debate has been raging in golf for some time now and Mickelson is a player very much with a dog in the fight given he used a 47.9 inch driver on his way to winning the PGA Championship this past summer at Kiawah Island. Far from alone in his criticisms, however, ahead of this week’s CJ Cup, Justin Thomas and Collin Morikawa have also chimed in with their two cents about the 46-inch restriction.

“I don’t really agree with it,” Thomas said. “I feel like there’s a lot of other things, you know, like the arm bar putter that they should be approaching as opposed to the length of driver.

“I think the fact that you see only a few people using a long driver speaks for itself, that it’s not really that big of an advantage. It’s a lot harder to hit it straight.

“In terms of do I think it makes the game of golf and growing the game better? No, I don’t at all, but they seem to have their kind of mind around that for a while now, so it seems to be the issue because if there’s an amateur golfer or players at home that want to hit it a little bit farther, so be it.

“If there’s guys out here that want to have a chance to put it in play with a 47-, 48-inch driver, then power to them. I had that opportunity; I just chose not to. I don’t necessarily agree with it, but it is what it is.”

The fear-mongering of late around Bryson DeChambeau’s excessive gains has seen the game’s traditionalists step in before courses like St. Andrew’s become obsolete. Yet for all the players using a driver above 46-inches – very few – Morikawa is amongst those unconvinced that such regulation will have any impact on the professional game.

“If you have a long drive and you see what Bryson did, you see what long drive guys do, they have a longer driver, right, and they’re able to hit it farther, but can you maintain that on the golf course? Hasn’t been done yet. Not saying it won’t be done, but if a guy wants a 47-inch driver, I think they should let them because why not?

“We’ve seen courses that you end up shooting 10 to 15 under and it’s not because the course is 9,000 yards long, we don’t play that. It’s because it makes you shape shots, it makes you hit different shots and it’s all about course design. So that’s my opinion on it; I think course design needs to be structured in a way where we don’t need 8,000-yard courses.

“Yeah, they’re great sometimes, but there’s a lot of short courses on our tour that don’t provide 25-under par and it’s because of the way the layout is and the conditions. I don’t think many guys have over 46 inch drivers anyways, so I don’t think it will change much.”