Five Irish moments to savour at the Ryder Cup 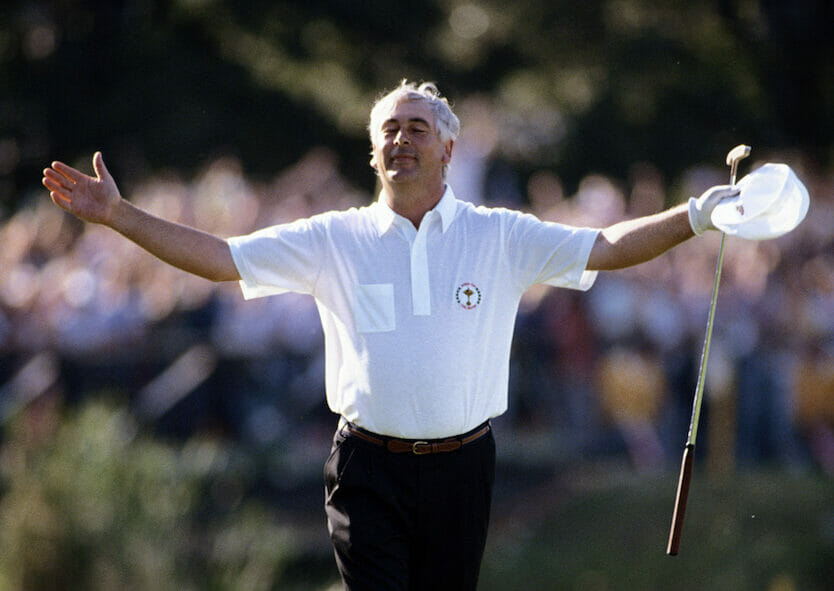 Padraig Harrington’s captaincy adds another chapter to Ireland’s rich Ryder Cup history. We’ve picked out five highlights from a list of so many that had Irish eyes smiling down the years:

Eamonn Darcy sent a Delgany sized dagger through the heart of Ben Crenshaw in their Sunday singles encounter in Dublin, Ohio, helping Europe to its first away victory in the history of the Ryder Cup.

Europe’s golden generation boasted the second and third best ranked players in the game – Seve and Langer – but it was Darcy who stood tallest of all that famous Sunday, dispatching a treacherous downhill five-footer for par as Crenshaw, who smashed his putter in anger on the sixth, was finally put out of his misery. 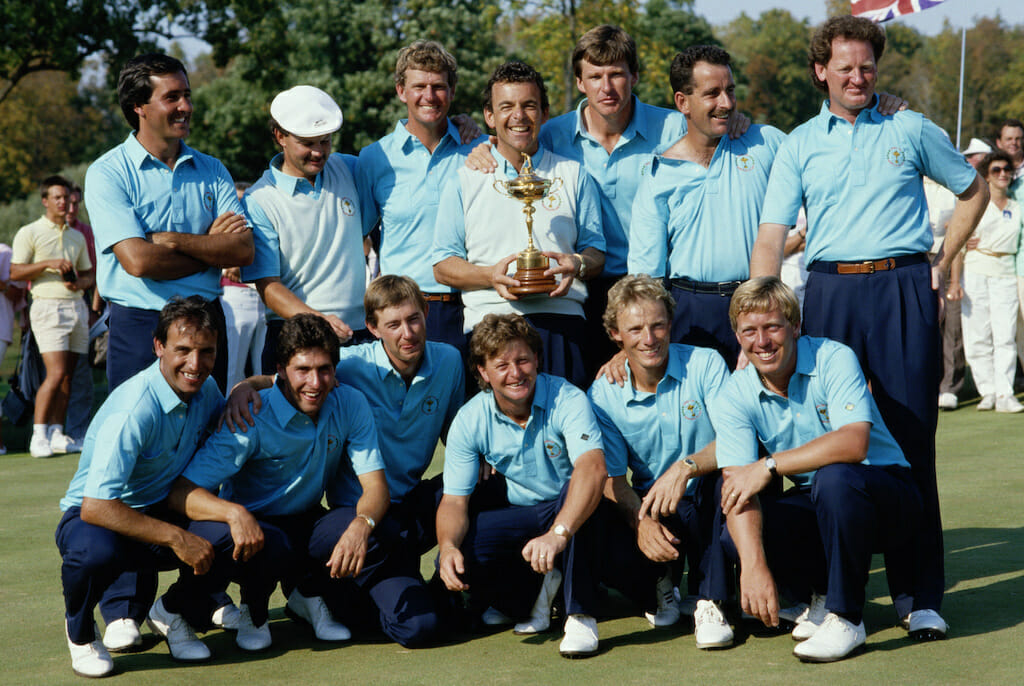 Tony Jacklin’s side had finally broken a hoodoo of 13 straight away defeats with Darcy immortalised in Ryder Cup folklore for his contribution to the breakthrough win.

“Nothing I have ever done in golf can compare with this,” Darcy said afterwards. “I was nervous playing the bunker shot at 18, but my hands were rock steady. I kept telling myself I could get the ball close to the pin. Mind you, that was the toughest putt I ever faced.”

What was actually going through his head? Darcy later revealed the swing thought:

For many so-called “experts”, the selection of Christy O’Connor Jnr as a wildcard for the 1989 Ryder Cup was a colossal error in judgement by Captain Tony Jacklin. O’Connor was under no illusions as to what some commentators felt about his presence on the team and prior to his Sunday singles match with Fred Couples, reading that morning’s headlines hardly inspired confidence.

”I’d felt terrible at breakfast that morning because of an article writing me off in one of the Sunday newspapers,” O’Connor Jnr recalled some years later.

”I felt the pressure it put on me was too much. Tony Jacklin, the captain, was brilliant on the final hole. He said on the 18th tee that if I put the pressure on, Fred wouldn’t be able to take it.

”Even though I was miles behind him after the tee shots, Jacko didn’t lose faith. ‘Put it on the green, I’ve a feeling that something will happen’.”

Call it Captain’s instinct, or a recognition of talent, but with his Jacklin’s endorsement coursing through his veins, O’Connor Jnr would strike a career-defining two-iron some 229 yards through the air and over water to as little as three feet from the pin. Couples, as well as Jnr’s detractors, had no response as Christy’s match-winning masterstroke was enough for Europe to retain the Cup.

“I remember looking up to the sky with my arms outstretched and tears ran down my face. It was unforgettable,” he recalled.

”It was the greatest and most emotional moment of my professional life.”

For all his talent, Dubliner Philip Walton would waltz the Ryder Cup dance just one time in his career. As it turns out, his one splash with the famous biennial contest was all he needed to write his name in the annals of Ryder Cup history. Talk about an impact.

By the time the 1995 showdown teed off, Europe were no longer the whipping boys of Team USA. There was an expectation around the boys in blue, and with it, a pressure Walton was admittedly unaccustomed to.

His Ryder Cup experience was far from an enjoyable one, though his golf stood up to the test. Walton would wield his sword to the detriment of Jay Haas on the final day and earn the honour of winning a match-clinching victory at the final hole. The stuff of dreams? Not in Walton’s case.

“I can’t remember if I was crying but I’ll tell you one thing: you had to be strong to deal with the pressure. People have no idea what it’s like,” he said.

“In some ways Oak Hill 1995 probably wasn’t the best thing that ever happened me. I played okay in 1996, but the real effect began to show in 1997. Something went from me. I felt it, but it’s very hard to explain. Definitely that Ryder Cup did take something from me.”

The Richter Scale clocked an earthquake measuring 4.8 at the beginning of Ryder Cup week, 2002, but nothing would compare to the roar that erupted when Paul McGinley’s ball disappeared inside the cup on the final green that Sunday.

McGinley’s left-to-right breaking down-hill 10-footer for par had everything riding on it, and Captain Sam Torrance made sure he knew it, too. With Jim Furyk almost holing his bunker shot, McGinley conceded a generous putt to the American to set the stage for a career-defining moment. McGinley, buoyed by seeing his line at first glance, was up for the challenge.

“I knew I was going to hit a great putt,” he said. “I hit this putt and, as putts go, it couldn’t be any purer. There was no way in the world it could miss.” 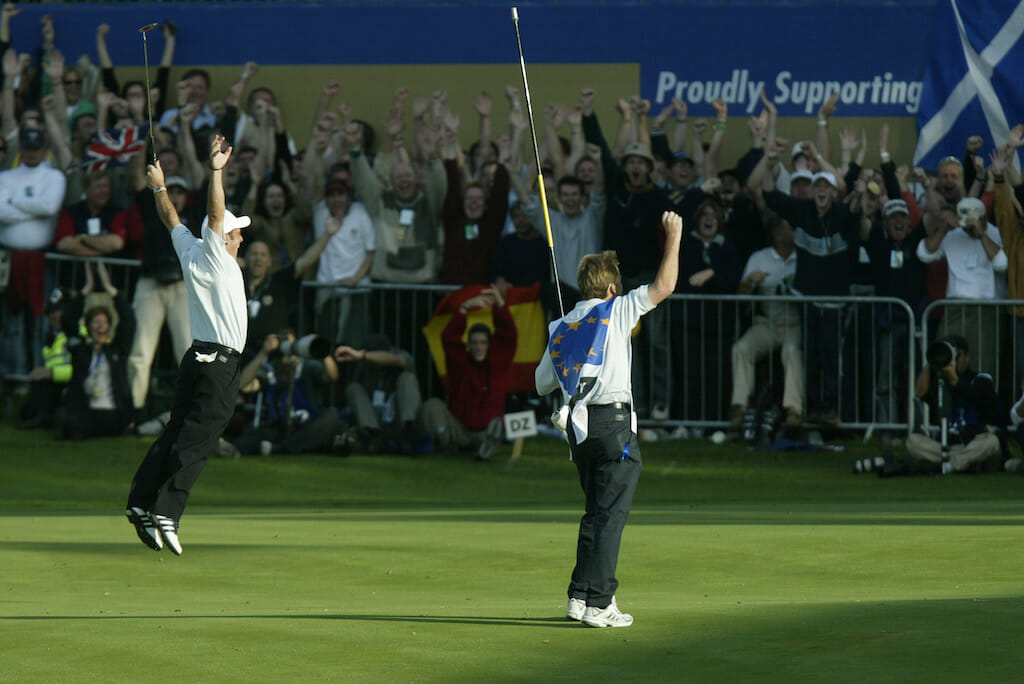 The sight of McGinley bouncing up and down, hands reaching for the sky before being mobbed by his boisterous teammates will never be forgotten, nor will his sodden frame draped in a tri-colour after jumping in the lake off 18. It was a putt that immortalised the Irishman, and went a long way towards cementing his eventual winning Captaincy at Gleneagles in 2014.

Few golfing occasions had the hairs standing on end quite like Darren Clarke’s welcome to the first tee at The K Club in 2006. Less than six weeks after the death of his wife, Heather, Clarke was carried in a rip of raw emotion by a sea of spectators all but hitting the ball for him.

“I’ve got no idea to this moment how I managed to hit the ball 310 or whatever down the middle off the first,” Clarke said. “I thought I could duff it, miss it, top it. I had no idea.

Even his opponents, Phil Mickelson and Chris DiMarco would warmly embrace Clarke on the first tee that day but far from a soft touch, Clarke’s play was inspired and that opening drive smashed down the middle set the tone for a tsunami of blue taking the Cup 18.5 – 9.5 on an unforgettable week in Kildare.