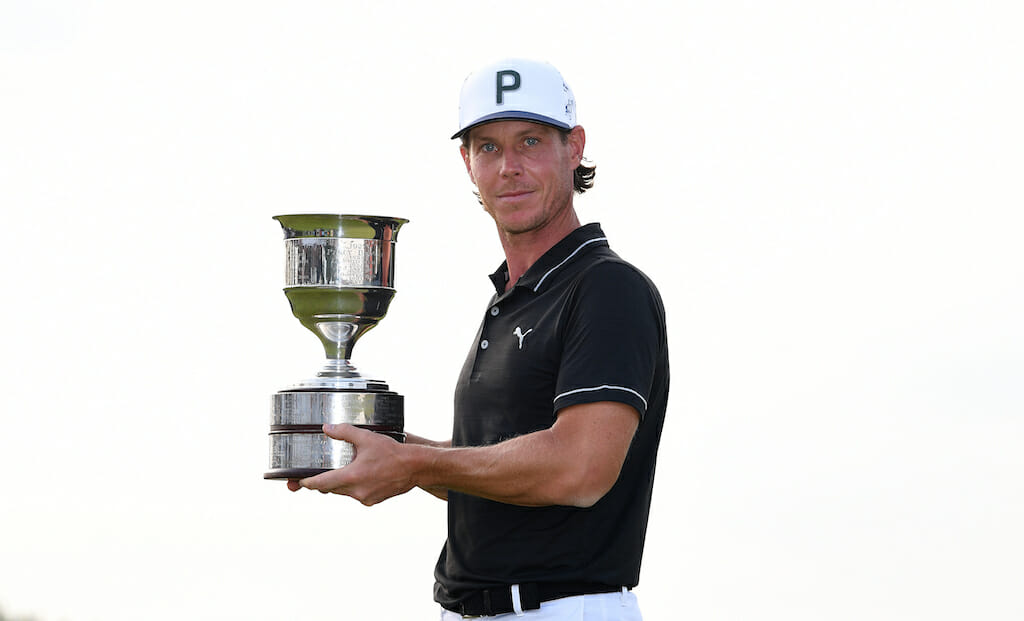 Sweden’s Kris Broberg battled his nerves long enough to hold it together over the final round before bursting into tears of joy in ending a near six-year winless drought to capture the Dutch Open at Cromvoirt.

Broberg, 35, went into the final round leading by eight shots after first sharing a new Bernardus course record with a second round 64 before lowering that by three shots with a 61 on day three.

After a first hole birdie on day four, Broberg found himself nine clear and it seemed the Swede would win by a country mile but that is not always how it unfolds in golf with Broberg struggling both left and right off the tee.

He bogeyed the third but then stalled for the ensuing six holes with each par just opening the door ever so slightly for his rivals One of those to put pressure on Broberg was Spaniard Alejandro Canizares who got to within four shots of Broberg with a seventh birdie of his round at the par-5 12th hole and, at that stage, moving to 19-under par.

Germany’s Matthias Schmid, who was seven-under through 12-holes, tried but the birdie on 12 would be the high-water mark of his challenge as he then doubled 13 to eventually sign for a 66 and finish second on 20-under par.

Broberg birdied the 10th but again looked wobbly in dropping shots at 12 and 14. Canizares kept the contest alive when he birdied 17 but then in choosing to hit his final drive down the left-side and onto the adjoining first fairway, the Spaniard made a mess of it in walking off with a crippling double-bogey ‘7’ in a 68 to finish third at 18-under par.

Then when it probably mattered most, Broberg holed a lengthy birdie putt on 17 and then pulled off a super drive down the last with his ball stopping just feet shy of a left fairway bunker ahead of a regulation two-putt par in a closing 72 for a 23-under par tally.

“I am happy right now but I was struggling all day as the game wasn’t there. I just didn’t feel comfortable over the ball, so I was happy to pull it off,” said Broberg.

However, being reminded that it has been nearly six years since capturing the BMW Masters in Shanghai, Broberg broke down in tears so much so, he struggled to speak with SKY’s John Morgan.

“It means a lot as it’s been…” Broberg said, trying to articulate what it meant to win again. And when Morgan reminded him of his last win in 2015, the emotion overcame Broberg who buried his hands in his face as the tears continued to flow.

Meanwhile, Royal Dublin’s Niall Kearney edged closer to retaining full 2022 European Tour membership, moving up six places to 122nd on the Race to Dubai thanks to a closing round 71 to share 12th place on 12-under par

European Ryder Cup vice-captain Graeme McDowell, contesting his first Dutch Open in 17-years, posted a closing round of 72 for a share of 22nd place at nine-under par. Ardglass Cormac Sharvin signed off with a 73 for a one-under par total to finish just outside the top-60.

Following the presentation Broberg elaborated on his 18th hole emotions:

“It feels good, I broke down on 18 but it’s been six years of hell,” he explained. “I’ve had three different surgeries on my left side but now I’m starting to get back where I’m supposed to be.

“The first few days I played really well. Today I was struggling like I was in the off season. I thought my eighth shot lead would be enough today, but Matthias (Schmid) played some really beautiful golf.

“It’s been a nightmare over the last six years. I was so close to quitting, it’s been so… I don’t know the word for it, but it’s been a tough time. This is way bigger (than his last win in 2015), more emotions.”