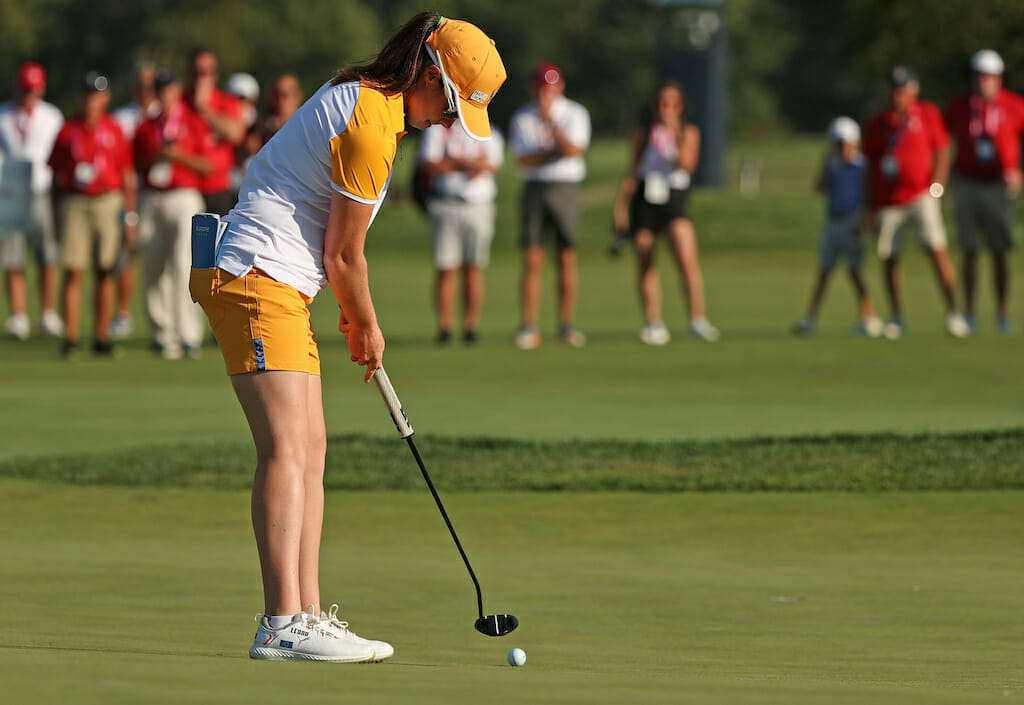 A lot of lip service is often paid to plugging the gender gap in sport but when it comes to golf, there is real momentum behind levelling the playing field.

The latest and perhaps most exciting step in the right direction has been led by KPMG, signalling a new chapter in LPGA history with the unveiling of KPMG Performance Insights, a statistical evolution that will change the way players, coaches, media and fans experience women’s golf.

After the KPMG Performance Insights team gathered data from more than 240,000 @LPGA shots, I was thrilled to dive into the numbers. From Inbee to Nelly, Leona to Lydia and more. A new era in golf insight is just getting started. #KPMGInsights #LPGAStatshttps://t.co/d4fQiQrIwv

We’ve seen the breakdown of numbers in the men’s game for years with shots gained data providing a key marker of performance that can translate easily to a wider audience. Now women’s golf is about to catch up.

Tracking began at the LPGA Mediheal Championship, held June 10-13 with the KPMG Performance Insights team accumulating data from more than 240,000 individual LPGA Tour shots. This newly filled ocean of statistics will help tell richer, more detailed analytical stories about the best players in the world – Which shots prove to be most valuable in determining the outcome of a given tournament? What new, context-filled details can we learn about the elite players in the sport? And just how good of a putter is Inbee Park?

For years we’ve heard trivial debate comparing LPGA players to their male counterparts but from early 2022, we’ll be able to see exactly how players stack up in hard, numerical based evidence and who better than stats supremo, Justin Ray, a KPMG Performance Insights contributor, to explain in detail the reach of the new data revolution in women’s golf. Better still, what does it tell us about our very own Solheim Cup winning hero, Leona Maguire?

Ray writes: “While Maguire gains strokes across the board, earning positive numbers off the tee, on approach and around the green, it’s putting where she really shines of late. Maguire averages 1.73 strokes gained putting per round since the LPGA Mediheal Championship, the second-highest clip of any player during that span.

“LPGA Tour players have an average make percentage of 55% on putts from 5 to 10 feet. Maguire is making them at a clip of 73%, the seventh-best rate of any player with 10 or more measured rounds. From 20 to 25 feet, she has made 21% of her putts, more than double the Tour average from that range (9%).”

Amazing work from the team at @KPMGGolf.
Thank you so much for all you continue to do for the women’s game. https://t.co/zTVfoF794r

It’s really impressive stuff, right? Well, Ray didn’t stop there. You might remember short-game guru Brad Faxon revealing his list of the 10 greatest putters of all-time earlier this year. Women were notable only by their absence. Largely regarded as one of the best putters ever, Inbee Park would’ve felt particular hard done by to miss out. At that time, however, there were no comprehensive metrics available to highlight just how special Park’s ability is with the flat-stick. As Ray again explains, however, there certainly is now. And needless to say, Inbee is remarkable:

“For years, golf fans have marvelled at the putting of seven-time major champion Inbee Park. Now, we can accurately quantify how remarkable she truly is on the green,” Ray explains.

“Inbee Park? She is making those putts a whopping 64% of the time. Park is currently making a higher rate of putts from 10 to 15 feet than her male counterparts did last season, on average, from 5 to 10 feet.

“At the KPMG Women’s PGA Championship, Park drained a 100-foot putt on the 18th hole in the opening round. With that miraculous make, Park gained 1.70 strokes on the field, the most in any single putt since tracking began.”

Let’s look forward to a whole lot more of these insights in 2022 and beyond.