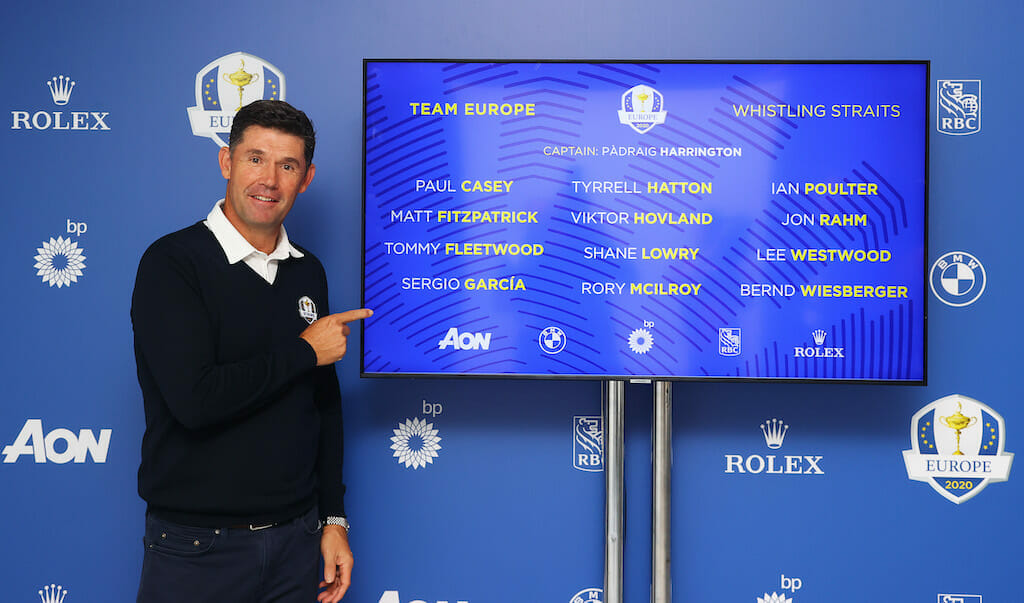 With sixteen points on offer in the ‘team’ matches and ‘only’ twelve points in the singles, it is no wonder that the foursomes and fourballs pairings are critical to the outcome of any Ryder Cup match. Both Captains will already be forensically studying various combinations and possible partnerships. The subtleties are endless.

Do you put a steady player with a flair player; a careful player with an attacking one; similar sorts or opposite personalities together? Steady, careful players may not (always) respond well to being in the rough, or being short-sided, more often than usual? Do combinations need to know each other well and be ‘friends’?

The tactical approach to an alternate shots foursomes match is completely different to a better-ball fourball contest. Making all of these decisions is a tricky job because every point (or half point) is vital in a close contest and Ryder Cups are usually very close affairs.

Neither team will want to be lagging behind facing into the all-important singles games on Sunday. To say that a good start in the team matches is more than half the battle is ‘hard and cold’ factual because more points are available to be won. Even the order of play has to be considered carefully; foursomes in the morning and fourballs in the afternoon or the other way around? Some golfers love playing early in the morning; others prefer a slow start to their day and playing later. Some like to be lead their team out and be at the top of the order while others prefer to bring up the rear. Getting it all ‘just right’ is a delicate balancing act.

Fortunately, the programme is already set for the first two days – foursomes in the morning each day commencing at 1.05pm (Irish time) and fourballs teeing off at 6.10pm, which has the potential to be advantageous from a European perspective but, not necessarily so! The boys in blue and yellow, in theory, have more experience of playing in the alternate shot format and will need less time to adjust to the ‘discomfort’ of playing somebody else’s poor shots. In reality, it is not that big an adjustment if treated as just another golf shot played in isolation. If you have to take a chance on an off form player, it’s better to put him in a better-ball match where he can hide to some extent and be ‘carried’ by an on form partner some of the time. In a foursomes, an off form player can drag the partnership to defeat in rapid order. As previously stated a good start is half the battle.

How many matches should each member of the group play in? Only eight are needed for the teams’ match ups on the first two days. Surely, it is vital that everyone has at least one trip around the course before the twelve singles on Sunday? If somebody is badly off form should he be consigned to the practice ground and keep one’s fingers crossed that he’ll find his game in time for Sunday’s singles? Mark James famously left three of his team on the side-lines until Sunday in 1999 and it back-fired badly. He compounded his error by putting the three (Jarmo Sandelin, Jean Van de Velde and Andrew Coltart) out in the singles one after the other at Nos. 3, 4 and 5. How daft was that? Needless to say, all three lost and so did the team.

Putting on my own thinking cap, I have come up with these flights of fancy. First, I would resist putting the Irishmen, Lowry and McIlroy together, in spite of their excellent record for Ireland when they were amateurs. Instead I would pair Shane with Jon Rahm at No. 1. The Offaly man’s steadiness would complement the Spaniard’s explosiveness perfectly. They’d throw down the gauntlet and let the Americans know they were in for a tough time regaining the cup. Payne Stewart was not the only American to express the belief that the Europeans were hardly worthy to be their caddies. The sooner that idea is shredded the better. Jon and Shane are the pairing to do it.

The second match is key. If the top pair loses, you are on the back foot and badly in need of an equaliser as soon a possible, otherwise the best you can achieve in the first of the five sessions is a draw. Foursomes usually rewards steady play and I see Paul Casey and Lee Westwood as the ultimate in steadiness. They have buckets of experience too and will know the tactical nuances inside out and how to cope with them.

I’d pair McIlroy and Poulter at No. 4 in the foursomes where they brought off an unlikely win from a 3-down position in the last match of session 4 to help set the tone for the Miracle of Medinah (2012) to take place in the following day’s singles. The passionate, Poulter will fire up the easily distracted and ‘under-motivated’ McIlroy, by coercing him to perform at his best as he did at Medinah.

At No. 3, Sergio Garcia is the perfect partner for Viktor Hovland who has the potential to become a ‘rookie-extraordinaire’ a la his fellow-Scandinavian, Matilda Castren in the recent Solheim Cup.

Fourballs: 1-Rahm and Wiesberger (two long hitting, birdie machines); 2-McIlroy and Hovland (no opposition could survive the heat if this pairing caught fire)  3-Fleetwood & Hatton (both capable of extraordinary birdie runs and they seem to enjoy each other’s company too) 4-Matthew Fitzpatrick and Garcia (Matt is an underestimated birdie cruncher; the Ryder Cup ‘psychologist’ Garcia would boost Fitzy’s confidence and help him to play his best)

Finally, It’s going to be an unusual Ryder Cup; maybe not as hyper as usual? It doesn’t matter but winning still does. The deficit in European support could be turned into an advantage if the American’s adopt the same (hard to resist) antics of their defeated Solheim Cup ladies who wasted their energy attempting to whip up the home crowd. It was futile and self-defeating. The only way to play winning golf is by taking care of your own business and putting a lower number on the board than the opposition. I’m certain that Captain Harrington will be telling his team exactly that!